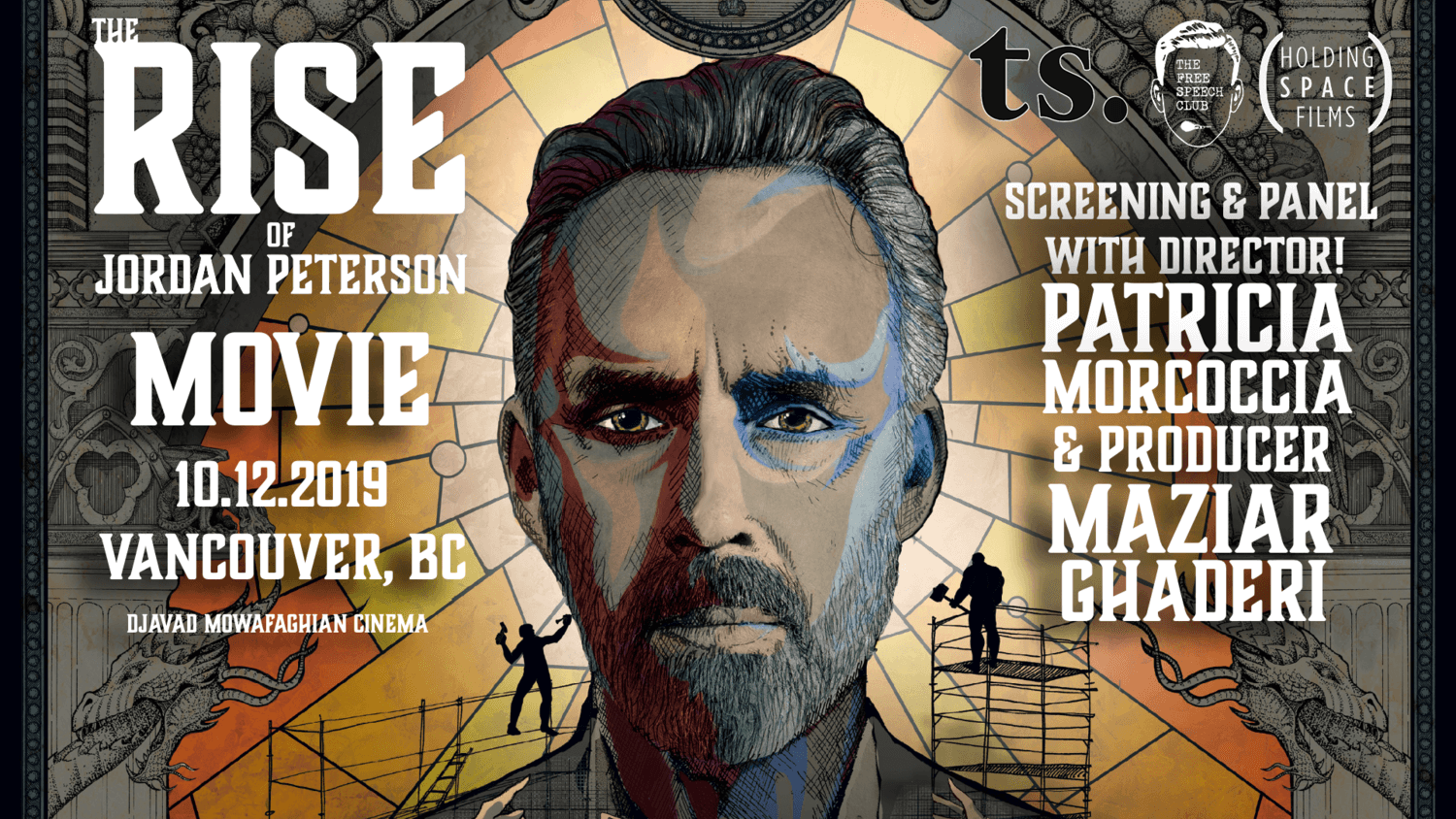 The Rise of Jordan Peterson premiered in September of this year and tells the story of Dr. Jordan B. Peterson’s ascent from a well-respected but locally known professor in Toronto to the international figure he has now become. Praised for its impartiality in storytelling, The Rise of Jordan Peterson does not take a side in the controversy that has surrounded Dr. Peterson’s work and, instead, presents the views of both his admirers and detractors. In this interview, Maziar Ghaderi, the producer of the film, joins Merion West and Kambiz Tavana to discuss the process behind the film—and, more fundamentally, what it has been like to actually know and work with Jordan Peterson. This is part two of the interview;  part one was published on December 6th.

Kambiz Tavana: Don’t get me wrong. I liked [the GQ interview], as well. But I think that it’s a waste of time for Jordan Peterson, who could do much better on other platforms where they actually let him bring his ideas to light—and use deep thinking to investigate complicated issues that we’re dealing with everyday. I mean, though [the interview] was informative and very insightful, at the same time, it’s a waste of his time, and he has to go after lots of people because of the misunderstanding that publication made.

Maziar: Ghaderi: I would say Jordan wouldn’t say it was a waste of time. In the very first part of that interview, there’s a snippet of him saying something like: “There’s been a lot of attempts to take me out. It just hasn’t worked.” It’s pretty dramatic! For Jordan, this underlines his success while standing up for his principles. Again, it’s badass.

At the same time, can you see how many of these [interviewers] don’t want to have an actual conversation with Peterson? They’re coming to find an issue and make a big deal about it. It’s pretty obvious, so why would Peterson want to do that?

I would say it’s because his fans like the fact that Jordan fights against these people. It’s an entertaining, combative situation, and that’s what the Internet is designed for. Of course, if you’re looking at Jordan from an academic lens, this stuff just seems unimportant and kind of low resolution, and it is. But Jordan is many things.

He’s also a YouTuber. He’s also a speaker and author. He spoke out against a human rights law in Canada, and it embedded him into a preexisting culture war. I’m not sure he expected that. His interactions with this polarization of the Left and the Right has actually kind of hardened him. It’s made him a little bit more radical. It’s made him a little bit more hard-skinned. In our film, there’s a scene before Jordan got famous when he was having an argument with this green-haired student, who is giving him a hard time about the transgender pronouns. She says, “You’re very behind in the culture. The culture is progressing way faster than you.” Then, Jordan says something very interesting: “You may be right,” after making his argument. That’s something that I haven’t heard him say in a long time.

The very first scene of the film is him in 2015 doing his own personality test with his family. There’s this joyful, lightheartedness to Jordan that is also something I haven’t seen in a long time. His life has become so politicized and polarized, which limits naked truth-seeking and makes him more conservative; more cautionary, and less trusting of the spectator.

The Right totally dehumanizes the guy too. They’re making him out to be a tool. Here’s a perfect example of this: we did a screening in Burbank, and part of the panel was with a conservative YouTuber, Mr. Reagan. He didn’t say anything negative about the film to our face, but then he talks about how the film was made by “leftists” on his channel. We’re not leftist. He says we are, “self-proclaimed, strong leftist.” Next, he plays a video of the Q&A, and there is nowhere that we say that. Then, he talks about the film and says, “This isn’t a film that we can use as a tool.” It’s the same kind of reaction I had with Turning Point USA. They wanted to use our film as a political tool to make the Democrats look stupid. That’s what they want, and they’re very honest about it. These guys don’t know the first thing about us if they are thinking they can use our film for a political end. That’s not the kind of film we made, and that’s not the type of filmmakers we are.

So, they want ammunition?

Basically, what I’ve seen with Jordan is that the culture war has made him more tense. The way he behaved in the Cathy Newman interview, which was a bit earlier on in his fame and the way he behaved with GQ is very different. In the GQ one, he was much more reactive and harsh. With Cathy Newman, he was actually a little bit more conversational. She was the one that was being harsh. That’s something that I have seen. The culture war has taken parts of his personality and made him more distrustful. I haven’t heard him say “But I could be wrong” in a long time.

I don’t know him as well as you do, but could it be a kind of a marketing tool to go to different platforms and just market yourself in the best way possible?

I’m not sure. I don’t know the intent behind some of these appearances, but what I do know for sure—talking to Jordan—is that he’s basically a kind of guy where, if the publication is big enough, he’ll do an interview. He’ll talk with whoever wants to talk with him. I think that Jordan needs to be careful, and I’m happy that he’s taking this time away. We saw his wife the other day who went for a coffee, and Jordan has canceled his London talk. He still needs a break.

As a person who has read his book 12 Rules for Life, I always picture him as someone who practices what he preaches. That’s the greatness of the book; he never takes himself away from the book, so he brings in lots of references in his writing. And you know that he lived through all of this. I would like to see him in that way: with gravitas, understanding, and facing the nakedness of reality that is frightening, but he embraces it.

I relate to what you’re saying for sure. A lot of the tweets are very political such as The Post Millennial articles that he shares. But Jordan is also a political guy. When he was a kid, he ran for office. He wanted to be a politician. Politics is part of the way he thinks too, and he does think that the left-wing progressive branch is going too far. He was in Prager’s film No Safe Spaces. He wasn’t forced to be in it. He wanted to be in it. A lot of his friends and colleagues—Ben Shapiro, Dave Rubin, Dennis Prager, Turning Point USA—these are all people that he’s going to continue to work with. He did a speech at Liberty University, which an evangelical university. It’s ranked the worst campus for free speech. What’s that about?

When he came out with his complaints about bill C-16, the transgender bill, nobody, including his left-leaning friends at the university said anything. Nobody defended him publicly. People privately messaged him and said, “I agree with what you’re doing and you’re courageous, but I can’t come out publicly because I’m afraid of what will happen to me.” I think he would have been fired if he didn’t get so much attention—and if his book wasn’t such a big hit. That’s what I think about it. The people that originally came to defend him were right-wing tabloid types like Ezra Levant’s Rebel Media. Levant is like Canada’s version of Dennis Prager. These are the only type of people that came to his defense. Rebel Media raised $200,000 for his research at the University of Toronto because there’s a government grant that he didn’t get. Ezra Levant is not well-respected in Canada, but, alas, these are the people that came to his defense when nobody else would.

I think that politics are very similar to ideology, where people put tribe over truth. An ideological person, a partisan, is someone that when they start a sentence, you know how it’s going to end. The thing about partisanship, though, is that it pays. You can make a lot of money telling people what they want to hear: feeding the animals. No one cares about that new album you’ve recorded. All they want you to play is that one hit from the ‘80s!

That’s my argument. I think Peterson, as a public intellectual, belongs to people who actually need his help—and not as ammunition for a political campaign that doesn’t serve anyone well.

I agree. Maybe it would be useful if I tell a little bit about my experiences meeting fans on tour. Many don’t care that much about the political stuff. All they’re interested in is the self-help stuff. They would say: “Jordan Peterson helped me to be a better father.” “Jordan Peterson helped me to be a better son.” “He helped me to get a raise at work because he taught me how to be more assertive.” “He helped me to stop watching porn.” These are all the things that these young guys say to me. They see Jordan as something very close to a dad they never had.

I think about the film Fight Club. I was in grade nine when it came out. There’s a line in the film that says: “We are a generation raised by our mothers.” There’s this element of fatherlessness I find associated with Jordan. The fans wants guidance and structure. These guys are already on YouTube and on the Internet playing Call of Duty or whatever. Then you have a Jordan Peterson video pop up, and they just eat it up. They first heard about Jordan as a badass—not like a Tony Robbins kind of guy who’s very charming and tries to tell you things in a smiley way. Jordan’s not like that. He’s kind of harsh and niche. Some guys respond to that very well. They like it. They like the message that life is suffering—and that they need to get their shit together. When someone speaks to them like that they feel respected. They think that Jordan thinks they are the kind of guys that can handle that truth. So, when you talk to people like that, especially young guys, certain personality types really respond well to it. They see it as an opportunity to rise to the occasion. Their moment to capture the dragon and test themselves, with everything before that blurring out in a dull grayish haze. They want to feel alive!

My dream with Jordan—for a guy that I quite like, a guy that I respect, and a guy that I’ve had the privilege to know for these last four going on five years—is for him to travel. Look outside of the West. Go write something completely new. Or something beautiful. Make art. Write a children’s story. Write a screenplay.