The Woke Mob vs. the Trump Mob: the Real Double Standard

“There is a real double standard at work. It is a glaring one, not the one President-elect Biden and Vice President-elect Harris claim exists but, rather, the one they want to gaslight us into accepting.”

The bar for calling something “racist” in the United States has apparently dropped so low that it is now okay to concoct an utterly topsy-turvy narrative in order to call out an allegedly racist double standard in the way the Capitol Riots vs. the #BLM riots have been treated by the powers-that-be.

Although I, like many of us by this point, have become so numb to the incoherent shrieks of “racism” echoing out in every direction that I am quite comfortable dismissing nearly all of them as vacuous posturing by celebrities and social media influencers, virtue-signaling by white elites and woke corporations, or cynical profiteering by the outrage-clickbait-peddling media, this one still threw me for a loop: I could hardly believe my ears when I heard President-elect Joe Biden and Vice President-elect Kamala Harris, parroted by the usual organs of the mainstream media, cry racism in characterizing the reaction of authorities to incensed supporters of President Donald Trump storming the United States Capitol on January 6th.

“No one can tell me that if that had been a group of Black Lives Matter protesting yesterday, they wouldn’t have been treated very, very differently than the mob of thugs that stormed the Capitol,” President-elect Biden said. “We have witnessed two systems of justice: one that let extremists storm the U.S. Capitol yesterday, and another that released tear gas on peaceful protestors last summer. It’s simply unacceptable,” Vice President-elect Harris tweeted.

Yes, the law enforcement response to the Capitol Riots was unquestionably a failure on every level. But racism? All I could think was how dumb do these people think we are? Do they really think we have forgotten the actual events of this summer so soon?

Do they think those like me who witnessed the #BLM riots with their own eyes in New York City (or in the many other cities across the nation shaken by #BLM’s violence this summer) have already forgotten how roving bands of almost exclusively black teens and twenty-somethings rioted and looted, breaking into high-end SoHo boutiques and struggling small businesses already ravaged by the Coronavirus (COVID-19), absconding with millions in merchandise and causing billions in damage, while our spineless leaders stood by doing nothing and left those businesses to board up and fend for themselves for days on end?

Do they think we have forgotten how those few looters and rioters who were arrested were let go, with all charges against them dropped? Does anyone believe that the Capitol Rioters currently being identified and hunted down across the nation will be met with similar lenity?

Do they think we have forgotten how prominent #BLM leaders defended this summer’s looting or labeled it “reparations,” while establishment media outlets—the same ones that had no problem referring to the Trump supporters in Washington on January 6th as a “mob” of “rioters”—had continued to insist back in June, against the evidence of our own senses and the empirical findings showing a trail of violence across the country brought by the #BLM mob, that we were watching “peaceful protests”? NPR even gave a platform to someone hawking a book entitled In Defense of Looting.

CNN, New York Times and Washington Post online headlines on January 6th, when these outlets suddenly had no problem calling things by their true names. 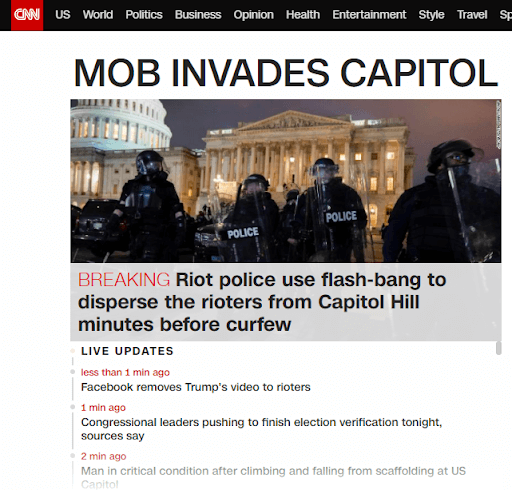 Do they think we have forgotten how newly woke corporations fearful of #BLM shakedowns donated to the cause, coming forward with statements of full-throated support and new diversity and hiring policies, while pretending that the hateful anti-cop, anti-white, anti-American rhetoric we were hearing (and the crude graffiti and retrograde violence we were seeing) in previously sacrosanct public spaces was somehow a progressive accomplishment, even as the media did its darndest to sell us on an empirically unsupportable narrative that the freak incident in which one bad cop in Minneapolis unjustifiably killed the career criminal George Floyd was a commonplace occurrence representative of ubiquitous “systemic racism”? 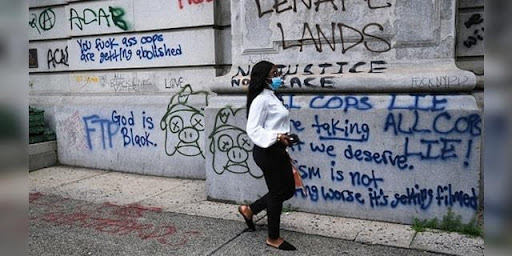 Do they think we have forgotten how the same Big Tech monopolies that were so quick to shut down President Trump’s social media accounts when his supporters came to riot had wholeheartedly embraced the #BLM cause and continued to let their platforms be used by #BLM and Antifa to organize disruptive protests, riots, and territorial occupations for weeks on end?

Do they think we have forgotten how people—from social media influencers to politicians like our incoming Vice President nominated for her race after #BLM—elevated their careers championing #BLM while, today, we are seeing people losing their jobs for joining (or persecuted for donating to) the pro-Trump assault on the Capitol?

No, we have not forgotten, and we will not forget. There is a real double standard at work. It is a glaring one, not the one President-elect Biden and Vice President-elect Harris claim exists but, rather, the one they want to gaslight us into accepting. That double standard being perpetuated by all the organs of the elite media, Big Tech, woke capital, the celebrity class, and the political class is precisely what has led to so many of President Trump’s supporters resorting to violence; they and their concerns are not being heard. Their anger, like #BLM’s anger, is no excuse for violence. I believe in a single standard for everyone, and that those who break the law in the name of any cause should be held to account. For reasons I have previously explained, I voted for President Trump in 2020 despite his many flaws, and yet I think his behavior since the election has been childish, irresponsible, dangerous, and unbecoming of the Presidency. I will make no excuses for him or for his more intemperate supporters. But as long as one side of the equation—with its angry, racially divisive rhetoric and its violent actions to undermine law and order and shake America to its foundations—keeps getting a free pass, the other side of the equation will never add up, and the delicate balance between them will never amount to a functional democracy that works for everyone.

Alexander Zubatov is a lawyer in New York, as well as an essayist and poet.