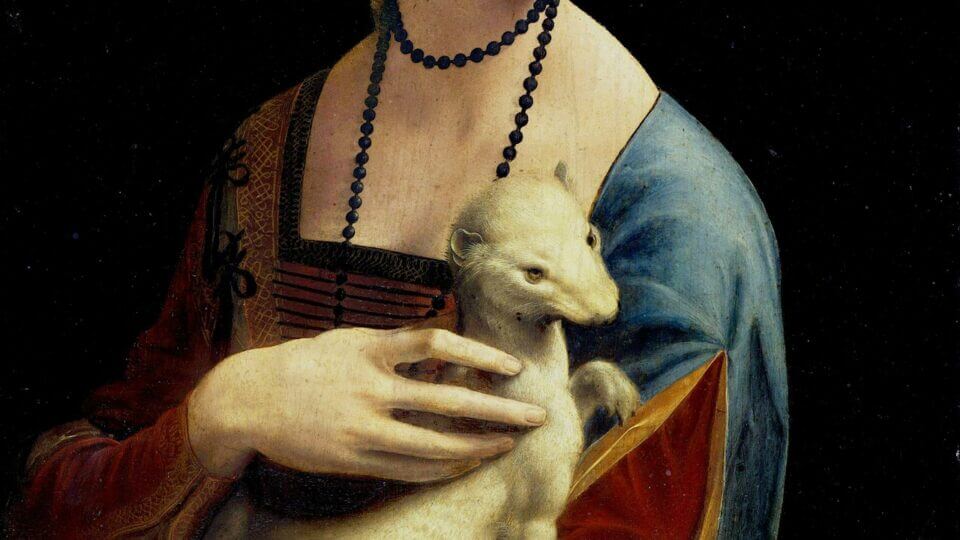 “Almost all the key events of modern Europe were seen through the eyes of this painting, which Collinsworth vividly brings to life in her writing.”

With the end of the brutal destruction of the Second World War, American soldiers raced to a Bavarian vacation home to arrest Hans Frank, one of Adolf Hitler’s accomplices in both the Holocaust and the looting of Europe’s great artistic treasures in the secret plot to build a new museum in Linz. Frank possessed Leonardo da Vinci’s c. 1489-1491 painting Lady with an Ermine when he was arrested, and he was later sentenced to death at the Nuremberg Trials. How did this work of art end up in the hands of a Nazi butcher?

The contemporary American author Eden Collinsworth tells the story of Europe through the eyes of Cecilia Gallerani, the painting’s subject, and the ermine she holds (supposedly symbolizing the tamed sexuality of Ludovico Sforza), eternally locked in the High Renaissance. Perhaps it is not unironic that a monster like Frank had Cecilia and the ermine looking over him as he signed death warrants which made him complain about cramps in his hands from signing too many in a single day. The creation of the painting is rooted in the darker side of human nature that moderns like to wish away despite all of the historical and empirical evidence revealing the abyss inside of us.

The story of Lady with an Ermine begins at the end of the Medieval world, the Hundred Years’ War, and the Bubonic Plague. Italy was not yet unified; it remained, in the late fifteenth century, a divided land preyed upon by the political and territorial ambitions of the French Kingdom and the Habsburg emperors of the Holy Roman Empire. Despite being caught between a rock and hard place, northern Italy became a bastion of Renaissance culture and wealth. As Collinsworth reminds us, “economic prosperity is one of the preconditions of art.” And Milan was now one of the great cities of economic prosperity that brought Leonardo into its glittering walls in service of Sforza dukes who ruled over its golden age for just under a century.

The rise of Milan, the city where Leonardo would create his famous painting, was due in part to the condottiere, mercenary soldiers, vagabonds, brigands, and oftentimes murderers, who were bought by the Italian mercantile elites to defend their city in times of trouble. The condottiere allowed trade and banking to become prominent, and this made northern Italy rich. And with its newfound riches came the splendor of the Renaissance.

What the Ermine Saw is a splendid account of the dark side of Europe’s modern history, beginning with these butchering mercenary soldiers, to the Nazi regime with its phantasmagoria of high culture surrounded by dead bodies, to the brutal police state of the Soviet Union and its attempt to erase Eastern European culture and civilization. Leonardo’s Lady with an Ermine witnessed these events with its eyes. Those events seen by the painting and its subject are the stories that Collinsworth tells in her grand new book.

Part art history, part general history, part meditation on the human condition, this new book also reveals to us the pilgrimage of the artistic soul. Leonardo was himself a pilgrim soul. Born out of wedlock, brought to Florence, seeking gain in Milan, engaging himself in the service of intellect, art, war, and science, Leonardo lived the adventurous life and so too did his painting as it moved from city to city, battlefield to desk, museum to museum. All the while, it witnessed the rise and fall of regimes, conquerors, and political systems in its five-century life.

Almost all the key events of modern Europe were seen through the eyes of this painting, which Collinsworth vividly brings to life in her writing.

From the scheming and sensual chambers of Milan, Leonardo’s painting enters a lost period of two-and-a-half centuries, likely still somewhere in Italy when the great European powers and dynasties of Spain, France, and Austria warred over its control. Somehow the painting survived, and it reappears in Poland, the eventual “bloodlands” of Europe. The Polish princess Izabela Dorota Czartoryska became the new owner of the work.

Izabela is the kind of princess that should be the subject of a major bioepic. She was a Cleopatra spanning the late eighteenth and early nineteenth centuries. Coming from a wealthy aristocratic family, her husband was presumed to be the next King of Poland before the conniving scheming of Russia put a different man on the throne. Izabela had an affair with him. At the same time, she had an affair with the Russian ambassador. While visiting London, she had an affair with a French duke who would later get his head chopped off by the guillotine during the Jacobin Terror. She had six children, from six different lovers. Benjamin Franklin was intoxicated by her charm.

While Izabela secured a future for her children, Poland’s future vanished thanks to the political ambitions of Catherine the Great. But Izabela’s affair with the Russian ambassador meant the family had ties to its new overlords. The family maintained its status, even if subordinate to and dependent upon the good graces of the Romanovs.

The painting, which was sandwiched between the great power politics of Europe in northern Italy, was now caught amid the shifting alliances of Eastern Europe. The Russian Empire was fast on the rise; Russia had orchestrated the annexation of much of Poland. The Kingdom of Prussia was also attempting to solidify its dominance in the Germanies, which came at Poland’s expense too. All the while the Habsburg Monarchy in Vienna sought to retain its control over Central Europe and wanted the potential threat of Poland eliminated. Poland was caught in the midst of the maelstrom and would eventually disappear from the map of Europe, only to temporarily reappear as a satellite duchy (the Duchy of Warsaw) to Napoleon Bonaparte, meaning Poland was still unfree.

With the rise of Napoleon, Lady with an Ermine reappears in the record books as part of the Czartoryska family’s art collection. With Poland vanished as an independent nation, Izabela took it upon herself to build a museum of cultural renaissance that kept aflame the light of Polish tenacity (which she surely embodied in many ways). Now the painting oversaw the ambitious, if naïve, plan of Adam Jerzy Czartoryski, one of Izabela’s sons, to secure his country’s independence.

Napoleon had come and gone. But the winds of reform and revolution were in the air. Hope for a new Polish nationalism, which was brewing alongside the nationalisms of so many other oppressed ethnic groups in Europe under the burdensome weight of medieval and early modern monarchies which clamped down on them, was bringing an unrivaled new energy of life before the painting. These plans for a reconstituted Poland, however, failed.

The painting then fled as a refugee to Paris, where prominent Polish artists and intellectuals ventured after their failed revolution. The painting was part of the collection of the Hotel Lambert. During the Franco-Prussian War, with the city of Paris besieged, the painting survived. It may have skedaddled off to London. Or, more likely, it remained hidden as the city was bombed and domestic revolution erupted in the streets.

After France’s defeat at the hands of Prussia, Lady with an Ermine was on the move once again. It returned with Wladyslaw Czartoryska who kept it in his private apartment before restoring it to a newly-renovated museum in the city of Krakow, the Czartoryska Museum. The painting managed to survive another war and was now among the prized works of art in a newly established independent Poland after 1918. This did not last long as we know the horror that followed World War I.

Hitler was more than just a brutal dictator. He was also a man who fancied himself a connoisseur of culture. Germany’s higher education system had produced some of the world’s finest art historians, critics, and artists who sought self-advancement in the Nazi regime. Hitler’s plan for a new museum in Linz (near Hitler’s birthplace) attracted their groveling attention. Men signed up to help pillage the artworks of Europe’s great museums in preparation for Hitler’s fantastical dream of a museum that would dominate all other museums. As Collinsworth writes, “countless other art experts became implacable participants in Germany’s organized plundering.”

Frank now comes into the picture’s frame. Careless German soldiers nearly destroyed the painting, but it was saved by Zofia Szmit before being captured by Gestapo agents hunting for the painting. Frank ended up lobbying Hitler for its possession and hung it in his office as he signed death warrants. There, the painting stood, overlooking the crimes of the Nazi death spirit, until the tide of World War II turned in favor of the Allies. With the Soviets now poised to liberate Poland and the Western allies pushing eastward from France and Italy, the painting took refuge with Frank as he fled to Bavaria. In a vacation home, American soldiers tasked with the recovery of the looted art of Europe found it as Frank was arrested.

In the brief post-war atmosphere of hope, the painting was returned to Poland before being appropriated by Soviet authorities and transported to Moscow. Once again, Leonardo’s great painting found itself surrounded by the chains of tyranny. From fascism to communism, Lady with an Ermine now witnessed the seminal events of the Cold War from Moscow. With a certain just irony, the painting also witnessed the downfall of the Soviet Union thanks, in part, due to the Solidarity Movement in Poland—the country where the painting had long resided. Despite the brutality of the Soviet regime’s anti-cultural policies and the threat of nuclear armageddon, the painting persevered through the Cold War and triumphantly got to see the end of the Soviet Union. Now freed from Soviet tyranny, the painting traveled west to be beheld in its splendor again in Poland despite all the horror and violence it had witnessed over 500 years. (It also traveled extensively for many exhibitions in the West following the collapse of the Soviet Union.)

The story of one of Leonardo’s great paintings testifies to the mystique of beauty, an ideal that many philosophers would consider part of the transcendentals. In the midst of sexual skullduggery, scheming politicking, war, crimes against humanity, and political tyranny (all of which are dark forces seeking expunge beauty from the world), the beauty that Leonardo created in his painting remained—a little light in the darkness. Most of the kingdoms and persons that the painting encountered have faded away. But its beauty remains. Collinsworth’s fantastic book is a testament, for those with the eyes to see, of that ancient and enduring truth that beauty cannot be destroyed. And in the survival of Lady with an Ermine, we also witness a most fascinating yet equally dark panorama of the history with which it was bound.

Paul Krause is the editor-in-chief of VoegelinView. He is the author of The Odyssey of Love and contributed to The College Lecture Today and the forthcoming book Making Sense of Diseases and Disasters. He can be found on Twitter @paul_jkrause