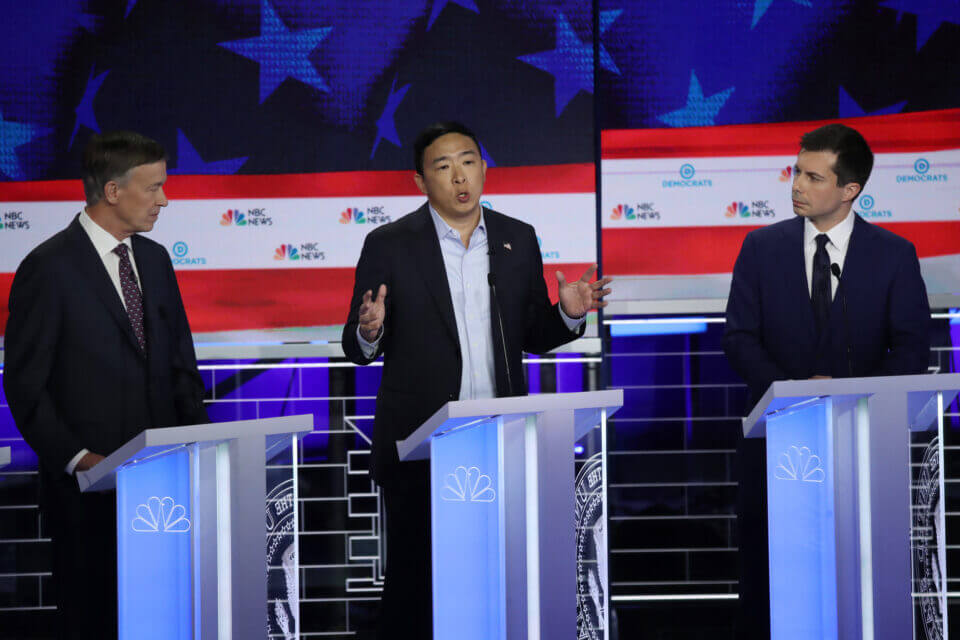 “With 14 million Americans suddenly plunged into indefinite unemployment, has UBI become more popular? It seems like the answer is yes and no.”

Long, long ago, in one of my first articles for Merion West, I wrote about universal basic income (UBI)—that is, the policy idea of making regular, unconditional cash payments to all Americans (either as a supplement to or replacement of traditional means-tested welfare). Although the idea was not without its merits, at the time, I concluded that it was ultimately a utopian pipe dream that was not destined for reality.

That was in 2017. To put it mildly, a lot has changed in the interceding years. Much that felt normal or possible back then now seems quaint and naive, while some of what looked impossible can no longer be dismissed so off-handedly. I believe UBI falls into the latter category.

In no small way is the Coronavirus (COVID-19) pandemic responsible for this development. It has forced policymakers, businesses, and the general public to adapt to unique circumstances in ways that mimic UBI and will not be easy to undo. It has also given us a few data points to extrapolate how society might react to UBI. The ongoing political realignment, which has seen the Republican party freed of some of its prior dogmas (and beholden to new ones), is also important.

Following are some (re)considerations about the feasibility and likely impact of UBI. To the best of my ability, I have attempted to group my thoughts into three categories: politics, economics, and sociology.

When I wrote about UBI in 2017, I noted that while it attracted support from many corners of the political compass, those supporters all had different—likely irreconcilable—visions for what it would entail. For example, libertarians would want to replace the entire welfare system—and likely other forms of public goods—with UBI, while progressives would likely want to supplement the status quo. For this reason, I thought, the coalition for UBI would prove to be fragile.

Fast forward to today: The salience of UBI has increased massively. No longer a niche fascination of activists and wonks, the policy was prominently championed by 2020 Democratic Presidential Candidate Andrew Yang, who warned of the impending obsolescence of human labor. Prominent leaders in technology, from Facebook’s Mark Zuckerberg to Elon Musk to Twitter CEO Jack Dorsey, have also thrown their weight behind the idea. (Dorsey recently donated $3 million to a UBI pilot program in Stockton, California.)

This increase in awareness and popularity of UBI is evident in many polls. In 2011, Rasmussen Reports conducted a survey that found just 11% of adults favored a universal basic income. When they asked the same question this past April, that number had jumped to 40%. Fears about automation like those espoused by technology industry leaders seem to be one source of motivation: A Gallup poll from 2018 found nearly half of Americans supported unconditional cash payments for people whose jobs had been replaced or obviated by artificial intelligence.

The present crisis quickly led to levels of unemployment that exceed even those of the Great Recession, and many of the jobs destroyed by the pandemic are not predicted to return. With 14 million Americans suddenly plunged into indefinite unemployment, has UBI become more popular? It seems like the answer is yes and no.

Perhaps it is fair to say that while the UBI “brand” has not seen a dramatic surge in popularity, people are becoming more comfortable with the underlying idea, at least as a form of crisis response.

On the one hand, there does not seem to be any obvious pandemic-related bump in UBI polling. An August poll conducted by the Pew Center found only 45% support for universal basic income payments of $1,000 per month, with 54% of Americans outright opposed to the idea. On the other, the financial stimulus provided by the CARES Act—including direct cash payments to all Americans and supplemented, rather indiscriminate unemployment assistance—has been very well-received, and there are calls from the public and prominent figures for its continuation. Perhaps it is fair to say that while the UBI “brand” has not seen a dramatic surge in popularity, people are becoming more comfortable with the underlying idea, at least as a form of crisis response.

Additionally, it feels important to note that due to CARES Act stimulus, while unemployment has skyrocketed, poverty has actually fallen. It may prove politically difficult to wind things down, especially if the labor market does not rebound.

All told, I think the political impediments to UBI appear less daunting from this end of the looking glass. With UBI gaining grassroots and grasstops support and mass unemployment likely to persist, many will likely learn to embrace at least some of its aspects and premises.

A universal basic income of any decent size would not be cheap. Sending each American adult a $1,000 check each month (about enough to bring every adult to the federal poverty line) would cost something just short of $3 trillion, which represents about 85% of 2019 federal revenue and 68% of federal outlays. For that reason, when I last wrote about UBI, I concluded that it was prohibitively expensive.

However, what if my conclusion was built on misguided assumptions—specifically about constraints surrounding the federal government’s ability to run deficits or print money? At $2.2 trillion, the CARES Act was the largest economic stimulus in U.S. history. To finance it, the federal government has been borrowing and printing money at an incredible rate. Traditional economic theory would suggest that this is dangerous: The introduction of trillions of new dollars into the economy should produce inflation, and increased government borrowing should eventually crowd out private investment as interest rates rise. But so far, neither seems to be happening—at least to any harmful degree.

The reason for this is persistent low inflation, which has been a thorn in the side of central bankers in the United States, Europe, and Japan for years. However, it currently looks more like an asset. As The Economist put it in July, “The absence of upward pressure on prices means there is no immediate need to slow the growth of central-bank balance-sheets or to raise short-term interest rates from their floor around zero.”

Surely it may be too early to observe any deleterious monetary effects stemming from the COVID-19 stimulus. And there is a sizable difference between a one-off spending spree and the regular creation of trillions of dollars. At some point, we will exceed our capacity to borrow and print new reserves. However, it appears that we should at least consider that traditional assumptions about the limits of monetary policy might not be as iron-clad as once thought. It also raises questions about the wisdom of proceeding from the default assumption of capital scarcity, with regard to public spending. Both open new doors for us when it comes to financing ambitious projects, such as UBI.

Because we are talking about national spending, the economics cannot be entirely separated from politics. It, therefore, bears mentioning that the political constraints on monetary policy and deficit spending seem to have changed quite a bit during the Trump years, particularly among Republicans. I do not know if this will be ultimately good or bad; however, I do feel confident that it would make a UBI scheme more financeable.

While the political and economic cases for UBI look rather unambiguously stronger in today’s light, the sociological case has been less helped by recent months.

One of UBI’s defining qualities—a bug for some, a feature for others—is its decoupling of work and income. Proponents of UBI are often cynical about this relationship. In his book, Bullshit Jobs: A Theory, the late David Graeber postulates that societies are keen to perpetuate [meaningless] work so people do not have time for political organization and activism. While that may seem a little conspiratorial, the underlying premise is less controversial: that work is a means of “soft social control.”

It provides structure and rhythm, and, for many people, it also provides a sense of meaning.

We tend to think of work as a means to an economic end: One trades labor for dollars, which one then trades for whatever one wants or needs. But work has important social functions as well. It binds people to schedules, organizations, and other people. It provides structure and rhythm, and, for many people, it also provides a sense of meaning. For these reasons, some (including this author) are hesitant about the prospect of dissolving or radically altering work’s role in society.

Thanks to the pandemic, we now have a starting place for theorizing about how people might react to a life where work’s contribution to the social order is greatly diminished. This summer’s record unemployment happened to coincide with mass protests and riots, some of which involved shocking acts of violence. It is, of course, impossible to attribute this solely to the fact that 14 million fewer people needed to get to work the next day, but one cannot help but feel that the demands of a nine-to-five job would have diffused some of this destructive energy. (This is basically what Graeber and those of similar mind say it does, only they tend to focus on rosier consequences.)

I know I am not the only one with this hypothesis, which I think will act as some headwind against the political momentum currently enjoyed by UBI.

There are hints of some sociological positives too. The pandemic and accompanying lockdowns are having predictably harsh effects on people’s mental wellbeing. A survey conducted by the Centers for Disease Control and Prevention (CDC) in June found a shocking 10.7% of the general population—and 25.5% of 18–24 year-olds—had seriously considered suicide in the past 30 days. (The benchmarks for these figures are respectively 4.3% and 11%.) However, curiously, the same survey found “only” 4.7% of unemployed people had experienced suicidal ideation during the same interval.

I call this “curious” because unemployment and suicide have a known causal relationship. I cannot speak with any authority on why the unemployed are currently less likely than average to be contemplating suicide, but it is possible that receiving supplemented unemployment payments is making some difference. This would be in keeping with studies that purport to show that raising the minimum wage could reduce suicide rates, as well as claims that UBI could improve mental health. It is also possible that the CARES Act’s various forms of debt relief are at-play.

In total, my opinion is that the plausibility of UBI has increased markedly in the past few years, thanks in part to COVID-19. That said, it is probably not something we will see in the near future, as there are still serious hurdles that have to be overcome before any meaningful UBI can be implemented at the national level.