Why Europe Is Weak on Iran 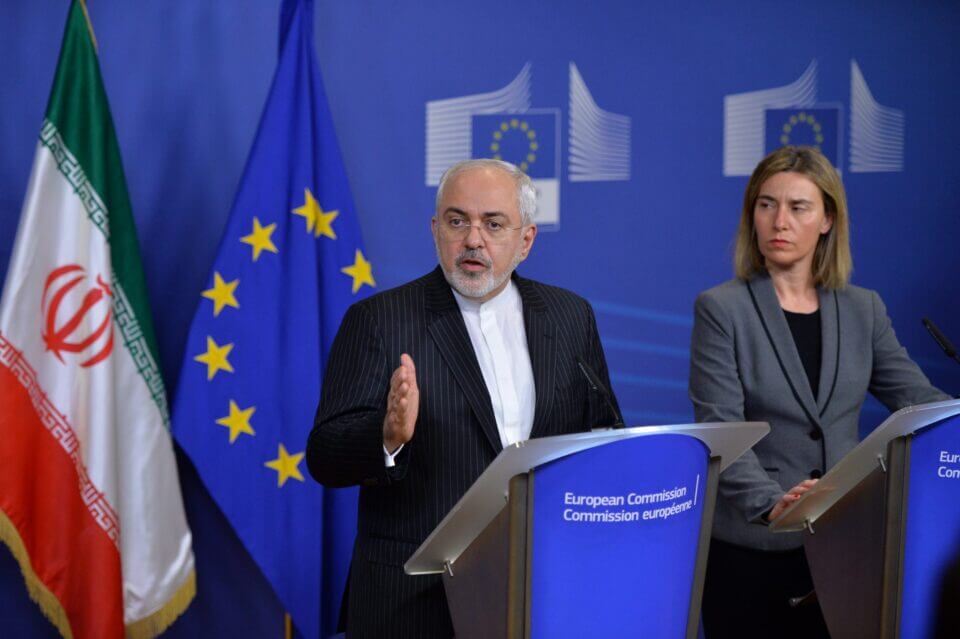 “It can be argued that the European failure to stand with the United States in maintaining sanctions on the Islamic regime is a symptom of their prolonged appeasement policy, which is masqueraded as diplomatic engagement.”

It has become an all but unchallenged assertion by many media analysts to attribute the reluctance of European countries to support the Trump administration’s resolute determination to maintain sanctions on Iran to President Donald Trump’s alleged alienation of European allies. However, what has been either intentionally or inadvertently overlooked by these analysts is the ingrained inclination of European powers to placate and appease the clerical regime in Iran. And this has been the case since the Islamic Revolution in 1979, which catapulted the clerics to political power. This controversial appeasement policy by European powers is reflected in their incessant attempts to condone the Islamic regime’s pursuit of destabilizing terrorist activities, even on European soil. This appeasement was further legitimized by the Obama administration’s 2015 nuclear deal with Iran, which was not only ineffective in achieving its objectives but also provided cover for Iran to intensify its subversive activities in the region. It can be argued that the European failure to stand with the United States in maintaining sanctions on the Islamic regime is a symptom of their prolonged appeasement policy, which is masqueraded as diplomatic engagement.

The lack of support by Russia and China in the United Nations Security Council for the continuation of sanctions on Iran is not surprising. Both Russia and China have little respect for human rights, and both are geopolitical rivals of the United States. However, the position taken by France, the United Kingdom, and Germany (nations that have presented themselves as the vanguards of human rights) is shocking and needs to be dissected. As mentioned, it has become common for anti-Trump pundits to impute the European powers’ lack of support for maintaining sanctions to President Trump’s general foreign policy, which has questioned certain previous relationships between the United States and Europe. As such, President Trump’s “America First” strategy, his passionate effort to prioritize the United States’ interests, and his incessant calls on European countries to shoulder their fair share of contributions to the cost of maintaining the North Atlantic Treaty Organization (NATO) have set in motion a chorus of criticisms and indignation from European allies.

Despite Iran’s numerous declarations that it would no longer be bound by the 2015 nuclear agreement’s restriction on centrifugal and uranium enrichment, European nations have sedulously been striving to stick to an already-dead nuclear deal, which has so far been ineffective in curbing the Islamic regime’s nuclear ambition. However, the ambivalence and controversial stance of European powers on the United States’ formal request of members of the United Nations Security Council to extend indefinitely arms embargoes on Iran cannot be explained by broadly maligning the Trump administration’s foreign policy orientation. In fact, European leaders have privately divulged their concerns regarding the destabilizing and insidious activities of the Islamic regime of Iran and have concurred with American action against Iran. However, they have eschewed enunciating their concerns publicly, which, in the words of United States Secretary of State Mike Pompeo is tantamount to a “failure of leadership.”

Compare the European countries’ ongoing volley of condemnation of Saudi Arabia to their silence on the murder of Masoud Molavi Vardanjani, an Iranian journalist critical of the Islamic regime who was gunned down in Istanbul in November of 2019 by Iranian secret agents.

So why should European leaders refrain from publicly expressing their views on Iran, if they have no qualms about expressing those concerns in private? How can we explain the European powers’ lack of courage to stand up to a regime that seems to have been given a certified license to commit egregious and contemptible atrocities at home and abroad? Trade considerations cannot be the main explanatory factor because European countries actually stand to gain more in intensifying trading activities with oil-rich Arab countries, which tend to be hostile to Iran. European leaders have demonstrated themselves to be more boisterous in publicly excoriating Saudi Arabia whenever that country engages in human right violation. Subsequent to the 2018 murder of Jamal Khashoggi, a United States-based journalist and critic of Saudi Arabia’s monarchical regime, the European Union unleashed its harshest condemnations and asked the Saudi government unconditionally to cooperate with a United Nations-led inquiry into Khashoggi’s death. Compare the European countries’ ongoing volley of condemnation of Saudi Arabia to their silence on the murder of Masoud Molavi Vardanjani, an Iranian journalist critical of the Islamic regime who was gunned down in Istanbul in November of 2019 by Iranian secret agents. While the case had many of the same hallmarks, European leaders and the Western media have consigned it to oblivion.

With the exception of occasional criticisms of human rights violations by the Islamic regime in Iran (which amounts to nothing more than a lip service), European powers have generally remained silent on the assassination of many exiled Iranian dissidents in European cities over the last four decades. What can reasonably explain the European stance towards the regime is the nations’ entrapment in a policy of appeasement that has come to cement their orientation towards Tehran since the onset of Islamic Revolution in 1979.

Understanding Europe’s appeasement policy towards Iran necessitates unravelling the latter’s destabilizing and violent activities and the former’s reactions to terrorist plots that have taken place on European soil. Since the commencement of its political life in 1979, the Islamic regime has committed itself to the duty of emancipating the world for Islam. It has, in turn, envisaged exporting the Islamic Revolution as the cardinal revolutionary principle that guides the regime. It is for this reason that the regime has continuously been engaged in financing, arming, and training militias across the Middle East, which have been acting as the regime’s proxies to advance its political goals.

In parallel to violently suppressing opposition at home and propping up militias as proxies in countries from Lebanon and Syria to Iraq and Yemen, Iran has also unleashed a reign of terror outside of its territorial boundaries in order to silence and extirpate exiled political  opponents. Since 1979, Tehran has been involved in hunting down political dissidents around the world. Based on the latest report released by the United States Department of State, Iran has been implicated in as many as 360 assassinations and terrorist plots, in more than forty countries. And, during the 1980’s, there were at least 78 terrorist plots throughout Western Europe, which were attributed to the Islamic regime’s agents and its proxies.

Several of these high-profile assassinations and terrorist attacks have taken place in Europe. The responses by the European countries, however, have been deplorable. In a shameful exchange, the French government released Ali Vakili Rad, an Iranian hitman, who had been sentenced to life in prison for murdering exiled prime minister Shapour Bakhtiar and his aid, Soroush Katibeh, in 1991. This was to facilitate the freeing of the French student Clotilde Reiss, who had been arrested in Tehran for what the regime described as “spying” during the post-election crackdown in 2009. Ali Vakili Rad received a hero’s welcome when he arrived back in Tehran. Similarly, following the assassination of Kurdish politician Abdul Rahman Ghassemlou and two of his associations in Vienna in 1989, the Austrian government permitted the suspected killers (who had taken refuge in the Iranian embassy) to leave the country without even being interrogated by Austrian authorities. And, in Germany, when another Kurdish politician, Sadegh Sharafkandi, was murdered in Berlin along with three aides in 1992, it was much of the same. Although a German court sentenced two Iranian agents to life in prison, they were later returned to Iran in 2007. (This German court, as part of its ruling, had declared that Sharafkandi’s assasination had been ordered by intelligence minister Ali Fallahian, acting under the direction of Supreme Leader Ali Khamenei.)

And as if this was not enough, European countries, particularly, France, the United Kingdom, and  Germany, have endeavored—as of late—to develop a mechanism known as the Instrument in Support of Trade Exchanges (INSTEX) to circumvent and bypass American sanctions against Iran. This takes place as the Islamic regime continues its activities of murdering and torturing its own people at home and orchestrating assassination campaigns to frighten and silence its political opponents abroad.

In fact, most assassinations and crack downs on political opponents have been carried out under Iranian Presidents Akbar Hashemi Rafsanjani, Mohammad Khatami, and Hasan Rouhani, who have all been regarded by Western countries and the media as moderates.

As has been discussed, the reluctance of European nations to side with the United States in maintaining tough sanctions on Iran is a continuation of their prolonged appeasement policy toward the clerical regime in Iran. It is nothing new and is not merely a reaction against the Trump administration. This long-standing European policy of appeasement, which was legitimized by the Obama administration’s short-sighted and ineffective nuclear deal with Iran, has failed to deter the regime from pursuing its disruptive and terrorist activities throughout the world. What lurks beneath the European nations’ lax responses to Iran’s ongoing wave of assassinations and terrorist plots is the delusional expectation that appeasement would allow moderates in Iran to rein in the current regime. Contrary, however, to Europe’s anticipation of its diplomatic engagement bearing fruit, the regime has not only continued its terrorist activities throughout European cities but has also used Europe’s ambivalent and weak responses as an opportunity to extract more concessions from the West. European leaders should realize that the moderate vs. radical division within the regime is a theatrical show to obfuscate and deceive Western countries into believing that diplomacy is a sound strategy. Contrary to this flawed line of reasoning, both the moderate and radical camps are subject to the ultimate authority held by the Supreme Leader, who has the final word on foreign, defense, and security policies. In fact, most assassinations and crack downs on political opponents have been carried out under Iranian Presidents Akbar Hashemi Rafsanjani, Mohammad Khatami, and Hassan Rouhani, who have all been regarded by Western countries and the media as moderates.

History has shown that appeasement is doomed to fail when it comes to turning belligerent and intransigent states into responsible and peace-loving nations. Europe should discard its discredited appeasement policy and side with the United States in order to renegotiate a new pact that would not only prevent the Islamic regime from possessing nuclear weapons and ballistic missiles but would also curb its malign activities throughout the world. As Giulio Maria Terzi, the former Italian Foreign Minister, has meticulously pointed out:

“The nuclear deal is not the only obvious area in which Iran can demonstrate a real commitment to moderation: releasing political prisoners, safeguarding the rights of citizens, withdrawing support for terrorist groups, retracting hateful propaganda, and ending their meddling in the affairs of other countries are just as important. Until such results are achieved, the narrative of Iranian moderation will remain a fantasy.”.

Sirvan Karimi is an assistant professor in the School of Public Policy and Administration, York University.

4 thoughts on “Why Europe Is Weak on Iran”