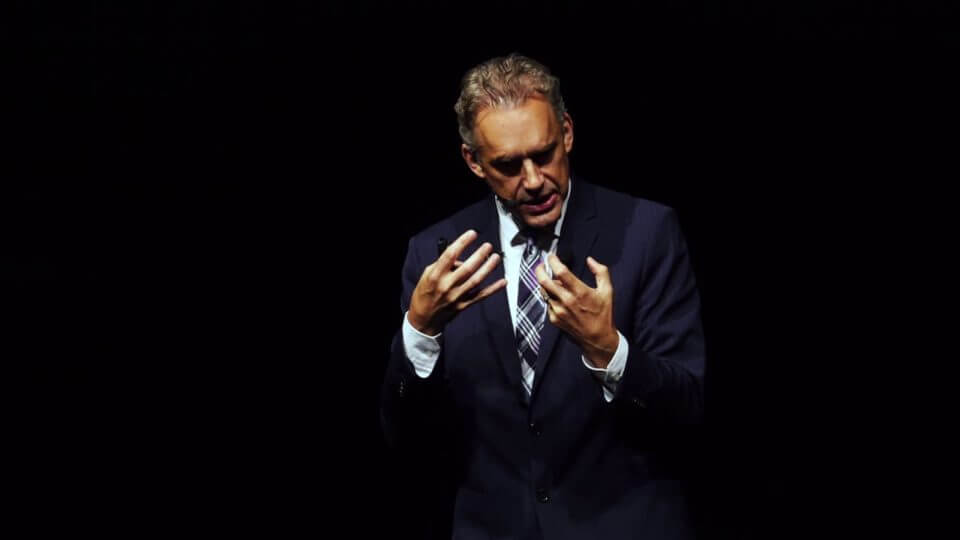 “…where Peterson is fond of citing the brutal nature of chimpanzees as proof of nature’s pitiless character, we should recall that the Left can just as easily cite the relatively co-operative nature of bonobos.”

Where does one start with Kambiz Tavana’s recent piece in Merion West, “The Viciousness of Jordan Peterson’s Critics”? In it, Tavana reproaches Matt McManus and me for—over the course of our many articles for Merion West that address his work—having been “unfair” to him. As far as I can tell, Tavana marshals four arguments (I use this term loosely) in support of this point:

One does not have to be a logic professor to see what these criticisms share in common: that they’re all, at bottom, diversionary fallacies. It’s perhaps for this reason that Tavana felt the need to intersperse his leaden diatribe with meandering summaries of existential literature, as if the mere mention of the name of Camus or Sartre were proof of one’s profundity. All the while, Tavana lacks the wherewithal to make a basic argument.

Given the bad faith with which Tavana has chosen to engage with us, it’s perhaps most important to respond directly to the claims that he makes in his article that are categorically false. Neither Matt nor I have ever advocated for “equality of outcome”—nor has Slavoj Žižek, who expressly disavowed that equality of outcome was something he sought to establish in his debate with Peterson. Of course, this allegation is partly easy to sidestep because it is—by its very nature—a poorly defined caricature of the Left. Who, after all, thinks that all discrepancies between peoples could be done away with? Not Marx, certainly, who confined himself to advocating for the abolition of social class—and who wrote in the Paris manuscripts that the problem with capitalist society is that inequality of wealth has a distorting effect on the endowment of other privileges (so that an ugly man can purchase a beautiful wife, and so on).

We should go further in critiquing this entire falsifying opposition between equality of opportunity and result. Upholding the need for the latter (rather than the former) is only useful as a clarion call against the Left, if one believes that its transformative demands are being put forth in support of equality of outcome. But are they really? From a global standpoint, it is clear that nothing resembling equality of opportunity genuinely exists. To give an obvious example, someone born in a poor community in Rwanda obviously does not have the same level of opportunity as someone born to an affluent family in New York. The same is true, albeit to a lesser degree, to the discrepancies that can be found in any modern American city, where dilapidated slums can be found side-by-side with impeccably curated gated communities. Thus, the most fundamental demand of the Left—for a more equalized distribution of wealth—can easily be subsumed under the category of “equality of opportunity.”

Indeed, the non-Western nation that made the greatest relative economic strides in the twentieth century—China—began its surge after the communist revolution of 1949 (it posted annual GDP growth rates as high as 19.3% during the Maoist era).

In attempting to refute calls for wealth equalization, Peterson tends to resort to one of two strategies. The first is to argue that inequality is a natural characteristic of animal and human societies (as with 12 Rules for Life, when he cites Price’s Law in defense of it). The second is to observe that global inequality between nations has been diminishing under our current capitalist system. Putting aside the partial incompatibility of these points, neither are very strong. The first fails because it’s just too sloppy: In order to argue for the universality of inequality, Peterson is forced to yoke together the general nature of inequality with the specific nature of wealth/class inequality. This is almost akin to arguing that slavery is inexorable and should not be opposed because, you know, inequalities have always existed. Moreover, for every example of inequality that we can find in natural and human history, we can easily cite a counterexample. For instance, where Peterson is fond of citing the brutal nature of chimpanzees as proof of nature’s pitiless character, we should recall that the Left can just as easily cite the relatively co-operative nature of bonobos. And the second fails because it’s clear—from a historical standpoint—that increasing economic global equality between nations cannot be attributed wholly to capitalism. Indeed, the non-Western nation that made the greatest relative economic strides in the twentieth century—China—began its surge after the communist revolution of 1949 (it posted annual GDP growth rates as high as 19.3% during the Maoist era). China remains a partially closed economy to this day—specifically, in order to stave off Western neo-colonization and the payment of extensive rents to foreign firms.

Discussing the vast economic fissures that define our global landscape is one thing. But what’s also clear is that many of Peterson’s tirades against the Left are more specifically directed at the kinds of activists he encountered in his career teaching at the University of Toronto: the “SJWs” (Social Justice Warriors) or “postmodern types.” Should Peterson wish to argue, for example, that the demands of university-educated female activists in developed nations for greater gender equality amount to calls for equality of outcome, he’s certainly on a firmer footing than if he were to make this claim about calls for greater wealth equality tout court. Still, the arguments he makes in this respect leave much to be desired. Peterson is fond of citing a psychological study by Gijsbert Stoet and David Geary that indicates that women in more gender-equal nations such as Sweden and Finland are less likely to go into STEM fields than women in less gender-equal ones. For Peterson, this fact proves that women are simply naturally less interested in said fields and, thus, should not be coerced by equalitarian apparatchiks into becoming scientists. This study has now been debunked. But even if it hadn’t been, how would such a study ever afford proof that women are naturally less interested in technical fields? It could also just as easily demonstrate that women are not socialized to take interest in the same things as men, potential opportunity be damned. If this were the case, it would be indicative of how far we have to go to achieve genuine equality—not just how far we’ve come.

Tavana’s article is so impoverished in terms of intellectual content it was necessary here to digress and discuss Peterson (who at least makes arguments). But let’s get back to Tavana. Tavana implies, in his piece, that even seemingly harmless efforts to engender equal outcomes can be destructive because left-wing “totalitarian-inclining governments so often arise in welfare states.” This has literally never happened. Indeed, every self-identifying communist nation typically deigned “totalitarian”—from China to the Soviet Union to Cuba—was feudal or semi-feudal and autocratically governed prior to a communist takeover (something that might alert a keener thinker to the notion that the cause of autocracy in these nations was not purely communistic governance). He also claims that “today’s Left” tend to disavow the violent excesses of twentieth-century socialist nations on the grounds that “that wasn’t true socialism.” Who is Tavana talking about? While it’s true that the likes of the China or the Soviet Union did not conform to Marx’s predictions of how socialism would arise, I’ve never claimed that they weren’t “true socialist” (whatever that means). The same can be said of Slavoj Žižek, who has described “the search for the moment of the Fall, when things took the wrong turn in the history of Marxism” as one “of the most devious traps which lurk for Marxist theorists” and prescribed the submitting of “the Marxist past to a ruthless critique.”

I’ll address one final issue. Tavana takes issue in his article with the ostensible “viciousness” of Matt McManus and me—the way that we’ve leveled “relentless” criticisms at Peterson, who is merely trying to help people and who is currently ill. As regards to his illness, it’s worth noting that much of what we’ve written on Peterson—including our forthcoming book, Myth & Mayhem (which includes contributions by Ben Burgis and Marion Trejo)—was written prior to when news of Peterson’s illness was diffused throughout the media. Even if this were not the case, though, there is no reason to think Peterson should somehow not be exposed to criticism because he’s sick. Peterson is expected to make a full recovery.

The most insulting thing one can do to an intellectual is not to be harsh towards him or her; it to refuse to engage earnestly with his or her ideas.

In the meantime, his books and lectures continue to be digested and profited from, and his influence—and I would argue, pernicious influence—continues to percolate through the Internet and society at-large (perhaps the only point Tavana’s amateurish tangent really proves). Nor is it the case that we ever claimed Peterson’s work cannot be of help to people. But this is not the focus of our writings: We focus on his arguments. And Peterson’s arguments do share a genetic similarity with those types of arguments also made by the Alt-right (though again, the concept of logical argumentation may be foreign to Tavana). As for Jim Proser, Peterson’s bozo far-right biographer, the less said the better. Tavana may feel that Proser’s comically awful Savage Messiah—a book in which Proser actually cites ratemyprofessor.com scores to try to discredit Peterson’s opponents—is a sweeping literary classic, worthy of deep hermeneutic study. However, if Tavana feels attacked by our criticisms of a man who, more than being a bad writer, is also repugnant—Proser has written that women have a “last f—able day” and also bemoans the onset of anti-White racism in Savage Messiah—it’s Tavana’s job to inspect why he identifies with Proser. It’s not our job to nurse Tavana’s hurt feelings.

Tavana’s claim that Matt and I have been too “vicious” to Peterson, coupled with his faux-benevolent tone, points to a larger problem within his piece. The most insulting thing one can do to an intellectual is not to be harsh towards him or her; it to refuse to engage earnestly with his or her ideas. In addressing the substance of not just Peterson’s arguments but also those of his online acolytes, Matt and I have shown more than a soupcon of respect. Tavana, with his gallery of fallacious, straw man arguments, has not. It may be true that Peterson has helped some people improve their lives. But, judging by the results, he has not helped them improve their arguments.

Conrad Bongard Hamilton is a doctoral student at Paris 8 University pursuing research on the relationship between agency and the value-form in the work of Karl Marx. He is a co-author, with Matt McManus, of the forthcoming text Myth & Mayhem: A Left-Wing Critique of Jordan Peterson.

66 thoughts on “Jordan Peterson Is Fair Game for Criticism”