What Sohrab Ahmari Has Failed to Sense 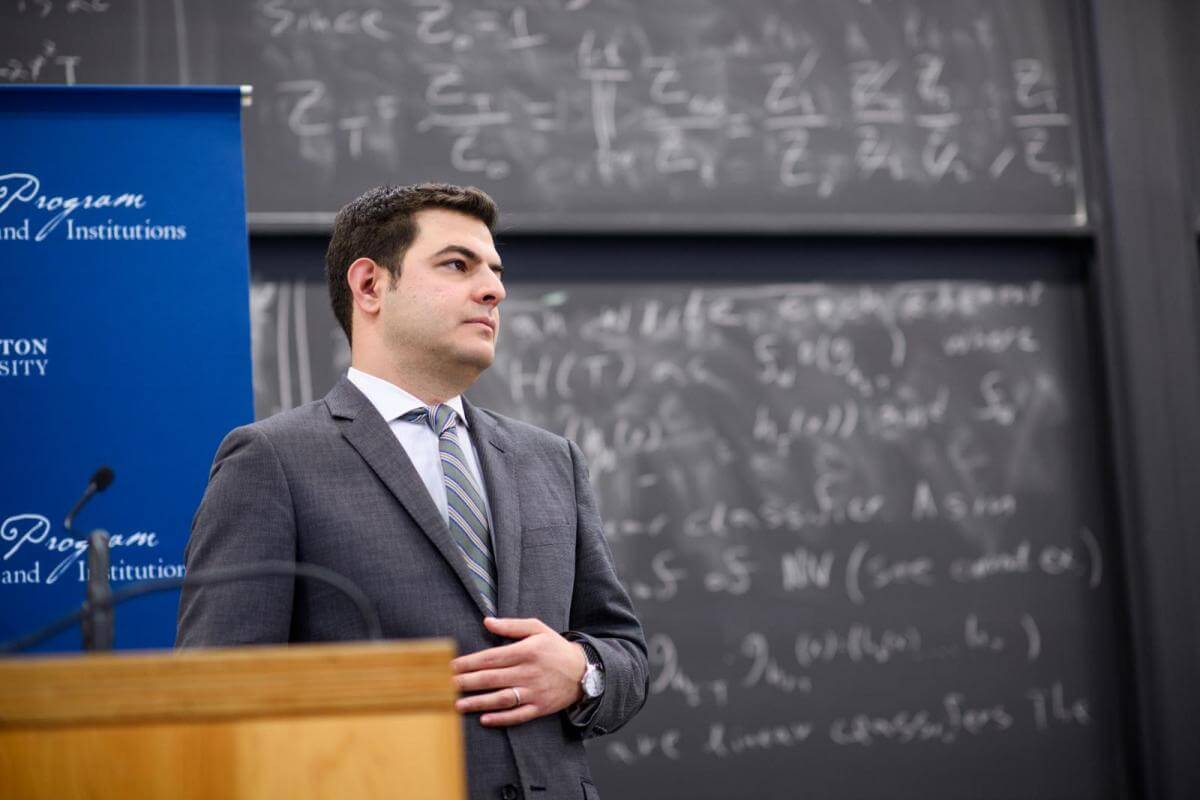 “Such specious reasoning is so problematic that it may well produce more of the existential instability Ahmari is keen to reject, rather than placate it.”

Many have expressed surprise that—despite the relentless attacks of figures from Richard Dawkins to Christopher Hitchens—religion continues to play an important role in post-modern politics. The critical theorist Jürgen Habermas has even opined that we live in a post-secular age where religion must engage in an ongoing dialogue with scientific rationality to reinvigorate a sense of meaning which has been lost in the 21st century. Some have even gone considerably further and called for the retrenchment of religion as the bedrock of culture and politics. In an American context this position is perhaps most associated with Sohrab Ahmari, who has made contentious demands to move away from liberalism and back towards faith based traditionalism. These arguments have been very popular with some on the political right, who agree with his conclusions that we live in an era where people are increasingly adrift without a sense of meaning and stability. In this article, I will try to show why these arguments do no hold water beyond a certain threshold.

The Problems With Religion as a Source of Collective Order

“The former delusion of the happiness of life that had concealed from me the horror of the dragon no longer deceives me. No matter how much I tell myself that I cannot understand the meaning of life, that I should live without thinking about it, I cannot do this because I have done it for too long already. Now I cannot help seeing the days and nights rushing toward me and leading me to death. I see only this, and this alone is truth. Everything else is a lie.”
—Leo Tolstoy, A Confession

Perhaps the most common invocation of religion in today’s political environment (and the least admirable) is as a source of collective order. This position is best expressed by Ahmari, who has consistently decried the impact liberal freedoms have had across society. For those who regard religion as a source of collective order, the world appears as a potentially decadent and dangerous place which requires a strong degree of moral control and homogeneity to remain stable. Religious traditions provide this. With their collapse, one is left with a society fraying at the edges—and one where individuals push against their “natural limits” in a desire for ever greater private freedom As Ahmari put it in an October 2019 essay for First Things:

“For the past two generations, American conservatives have been focused on liberty, first in the fight against communist totalitarianism, then in a more undifferentiated way in our resistance to “regulation.” But today our challenges are different. Our society is fragmented, atomized, and morally disoriented. The new American right seeks to address these crises—and to do so we need a politics of limits, not of individual autonomy and deregulation.”

This position can appear very appealing to many conservatives, but it is extremely dangerous to genuine religious faith. The primary motivation for adopting a religious outlook is establishing a form of collective order which is morally or even aesthetically appealing to the religious conservative. Religion is effectively operationalized as a means of generating cohesion and prescribing “limitations” on actions the conservative does not approve of. However, there is very rarely any significant effort to showcase why the idolized religious doctrine is true or false, according to the dictates of human reason or spiritual reflection. At best, the usual defense is that if the doctrine were false, it would have devastating impacts on our sense of the meaning of life and the potential to establish the collective order. The hyperbole rhetoric invoked by Ahmari when describing contemporary society is indicative:

“Our culture prescribes no templates for life, thus opening up greater scope for personal choice at the cost of a predictable life trajectory. Will someone get married? Have children? These have become entirely open questions—and for just this reason, finding a stable basis on which to answer them seems more and more elusive. In economic life, creative destruction has generated great wealth, especially for the innovative classes. But the downsides are increasingly evident. Even well-educated, talented young people find the hyper-competitive marketplace hard to endure, which is why so many fall for misguided socialist promises. This ideological seduction is a political sign of the correlation between limitless freedom and the all-encompassing state.”

Ahmari is essentially trying to reason backwards from his moral and aesthetic beliefs (and needs) towards ontological conclusions about the existence of objective moral principles and divine entities.

It is difficult to take all of this rhetoric seriously, as it invokes many contradictory imperatives. For instance, one might well point out that the “hyper-competitive marketplace” and the trials it imposes precisely prescribe a “template for life”: that one must succeed in the capitalist system. One suspects Ahmari ignores this because that would cede too much ground to a materialist analysis of culture (ala Marx) that he would naturally reject. But say he is correct. Is it true that without religious faith we are left in an empty situation where it is impossible to determine a trajectory for our existence? Does that provide strong reasons to accept the truth or falsity of Ahmari´s position? The answer is no. As Miguel de Unamuno pointed out in The Tragic Sense of Life, this is irrelevant to the truth or falsity of the doctrine; even if it is true that individually—and collectively—we needed God and the order provided by uncontroversial religious principles, that does not mean God or uncontroversial religious principles exist. Ahmari is essentially trying to reason backwards from his moral and aesthetic beliefs (and needs) towards ontological conclusions about the existence of objective moral principles and divine entities. Such specious reasoning is so problematic that it may well produce more of the existential instability Ahmari is keen to reject, rather than placate it. We have no right to demand God exists simply because we need him to fulfill a useful moral, aesthetic, and, ultimately, political function.

The problem of the meaning of life may, as Wittgenstein opined in his Tractatus, permit of no answer because the answer to riddle of space and time lies outside space and time.  This would suggest that beings such as ourselves who perceive of the world in this fashion can never access it. Such a realization can have tremendous political consequences since it means that each of us must ultimately take responsibility for our decisions about what is of value. For religious conservatives such as Ahmari, this is an anxiety inducing prospect since it means that there can be no shared commitment on what constitutes a good life. This pushes strongly against the idea that political authority or the political community has a right to insist on “limitations” to private behavior.  The result, according to Ahmari and others who share his orientation, is some form of chaos. This is unacceptable, even if they do not have a plausible or even articulated ontological explanation for where the source of objective religious meaning they desire comes from.

This is where figures like Ahmari misunderstand the virtuous qualities of liberalism, well stressed by figures he disdains such as John Rawls. At its best, liberalism has been more honest in recognizing the limitations to human understanding, while trying to make the best of them. This is well articulated by the Kantian project, which anticipated Wittgenstein in demonstrating that human reason will always covet answers to questions that can never be achieved. The political consequences of this are that each of us is tasked with finding individual meaning in an uncertain world, while, at the same time, developing the civic character necessary to cooperate with others. J.S Mill put it nicely in his essay On Liberty when he implored us to treat each life as an experiment in living which may provide gratification to ourselves while providing an example to others. It also means that we should be embracing the removal of limitations on human action, since this empowers our exploration of different ways of living (and being) in the world. At it worst, this may result in decadence and idleness, much as religious homogeneity generated idolatry and dogmatism. But at its best, it enables each individual to, “grow and develop on all sides, according to the tendency of the inward forces which make it a living thing.” Progressivism of the sort I support goes even further and claims that it is a great wrong for individuals to lack the resources and capabilities needed to develop all sides of their nature, particularly when this is the result of morally arbitrary circumstances. We, therefore, have serious obligations to establish a more egalitarian and democratic polity to give each individual a chance to become or define who they truly are.

This can be an inspiring vision of the world, though also a tragic one. It also has a fundamental relationship to different ways of comprehending the relationship of human life to time. The liberal and progressive project recognizes the fallibility of all of our projects and their ultimate incompleteness within time. It acknowledges that within the vastness of history our accomplishments and failures reflect less upon us than they resonate in the ongoing story of our descendants. By contrast, the religious conservative wants to bound human life to things which appear more permanent—whether the political community or the mimeographed image of God. But without an account of where this permanence ontologically comes from, we are not permitted to believe time and life are the moving image of an eternity we apprehend. Rather the sources of eternal permanence craved by the religious conservative are little more than the lived reality of time turned, like Lot’s wife, to rigid salt.

One thought on “What Sohrab Ahmari Has Failed to Sense”