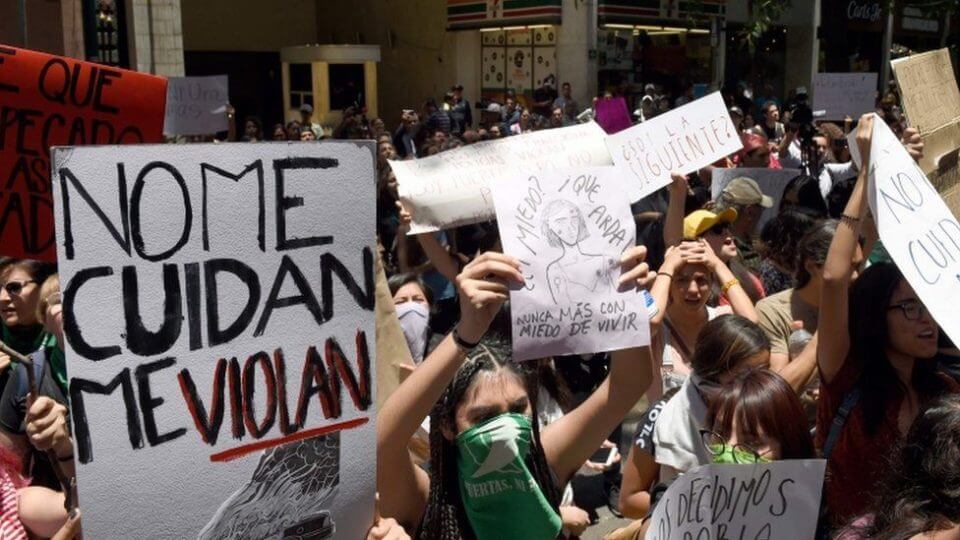 “Now, pink glitter seems to be the spark of a new revolution in Mexico against gender violence.”

First, pink glitter bedazzled Mexico City’s security minister Jesús Orta. It was described as, “a serious aggression.” Then, pink glitter was released all over Mexico City in the midst of a historic protest. They called it “vandalism.” Now, pink glitter seems to be the sign of a new revolution in Mexico against gender violence.

On Friday, August 16th, thousands of women gathered in Mexico City to protest the alarming rates of gender violence in my country. The protests were sparked by the terrifying news of a 17-year-old girl (yes, girl) who was raped by four policemen in Mexico City. A 70-year-old woman was also raped and then left to die, and a 6-year-old child was raped and murdered. While Mexican women were enraged about these crimes, the organized protests were also a cry for help and attention since more than 1,200 women have been killed in 2019 due to gender violence. We live in a country where femicide barely make the news.

“No nos cuidan, nos violan” (“They don’t protect us, they rape us”) was the battle-cry hundreds of women shouted in unison to protest the fact that at least five women are raped every day in Mexico, that gender crimes have increased 104% in the last three years, and that many of the rapists and perpetrators are, in fact, employed by the government. In Mexico, it doesn’t make the news that some policemen and soldiers are responsible for sexually abusing women.

The protests on Friday (“16A”) were different from any other; they weren’t only filled with anger, hopelessness, rage, sadness, and fear, but they were meant to be a safe space for women. Unlike other social mobilizations on gender violence, the organizing groups asked that only women be present in the contingent and that men—even if they consider themselves allies—step aside. Andrea Nava, a student at Instituto Tecnológico Autónomo de México and president of the student association Diversidad ITAM, describes the importance of keeping men out of this mobilization saying that, “sometimes women take their partners or friends to the protests, and other women find their rapist, their abuser or aggressor…On Friday, if a guy approached, we asked him to step aside and explained this was a space meant for us.”

The Glitter Revolution was—and is—meant to be disruptive, not destructive and to make others focus on women, our rights, our sufferings, our needs, our pleas. The mobilization sought to broaden the conversation and draw the attention of media outlets in hopes of making government officials take seriously the pledge to: “protect all citizens equally.” However, the results—in Mexican media—were not as expected. Most of the published articles covering Friday’s protests focused on the fact that historical monuments were vandalized and that several city-properties were damaged. The conversation was centered more on the vandalism, rather than the systemic violence that the women were protesting.

As such, the 16A protests resulted in divided opinions regarding the “ways” women protested in Mexico City; the discussion became more about if there is a valid justification for painting walls or monuments, for breaking windows, and setting fires in the middle of Mexico City. People commented on social media, and “experts” voiced their opinions: “Why can’t women protest peacefully? Why couldn’t this protest be like the ones before?” For Abigail Ríos and Mariel Velázquez, both students at Tecnológico de Monterrey, the mobilization was meant to be different from other protest against gender violence: “This protest was about showing there is a problem, and someone needs to do something about it. It was different from, for example the 8M Women’s March, because women were angry and fed up,” Mariel suggests.

Is destroying public property and vandalizing monuments valid? In the specific case of the 16A mobilizations, I believe it is. I believe that these acts are part of a ultima-ratio mechanism to get the attention of those with the power to improve the lot of women in Mexico. If ever I were to lose my mother, a friend, or someone close to me due to gender violence, and—if on top of that—I were ignored, mistreated, and politically abused, as many women in Mexico are, I would be doing anything to be heard. That includes perhaps writing “Femicide Mexico” on a three-foot wall. Estefanía Durón, a researcher and junior analyst, disagrees. For Estefanía, vandalism and aggressive displays are not the best way to tackle the issue; instead, in her view, these actions, “only result in the delegitimization of the feminist movement in Mexico and make the media focus more on whether someone did something—rather than the real problem.”

Unlike Estefanía, Andrea Nava couldn’t care less if walls are painted and windows destroyed in the name of the women who are gone: “Monuments are built to feel pride [in] something valuable: independence or liberty, for example. Here [in Mexico] there is no freedom for [women], so, why would we have a bunch of rocks symbolizing values that don’t exist anymore?” But Andrea still stands firmly against the destruction of public transportation, an aspect of Friday’s protest that received extensive criticism. Both Abigail and Mariel Velázquez, a law and finance student in Mexico City, describe getting goosebumps and being overcome with sadness upon seeing their city become filled with graffiti, scattered glass, and glitter all over the streets. However, it was a necessary cost in order to make government officials have a wake-up-call, they believe: “Only by doing it we are seen and heard.”

How should women protest in a country where at least nine women die per day on account of their gender? I believe there is no easy answer. Some women take to the streets, shout their hearts out, and paint on walls, particularly when peaceful protests in the past have not yielded results. But then there are other women, who avoid the protests and try to enact change through institutional means. This is Estefanía’s approach: “I don’t believe that burning things and setting fires is going to make a huge difference. I have been called a ‘closet feminist’ because my fight does not necessarily involve actively participating in protests…I believe in the existence of other platforms and creating a consciousness in those close to you.”

In the end, I believe these two approaches to feminism in this context are both valid—so long as each understand that we are part of a greater movement. People need to focus on what is truly important: the fact that gender violence in Mexico keeps increasing. I believe we are all concerned about the extent of the violence and vandalism, which took place during the protests. We are concerned about the male reporter who was harmed; we are all sorry for these events. However, when media outlets focus more on incidents rather than the reason for why social mobilizations come about, that is a problem. Despite everything, it is difficult to sit in judgement of the women who are setting fires and painting walls because it is nearly impossible for many of us to fully understand their grief at the extent of their loss; they’ve lost a daughter, a mother, a sister.

Following the events on 16A and previous declarations by feminist organizations, the governor of Mexico City, Claudia Sheinbaum, met with several groups in an effort to find solutions to address the increasing rates of gender violence in the capital. She also stated that women who vandalized public property would not be prosecuted.

The Mexican Glitter Revolution is not only meant to be a protest about a teenage girl being raped by a policeman. It is also meant to draw attention to the hundreds of cases that go unpunished and the lack of protections for women in Mexico. Gender violence in Mexico is an issue that must be addressed with the utmost urgency. And, until concrete actions are underway, some women will continue to be victims, and others will keep taking to the streets.

Verónica Lira Ortiz is an honors graduate with a B.A. in International Relations from Tecnológico de Monterrey, who is currently focusing on gender studies and developing student programs against gender violence. She can be reached on Twitter @vero_alo

The women interviewed for this piece are all self-identified feminists who have experienced gender violence.