Who Was Joseph de Maistre? (And Why He Matters) 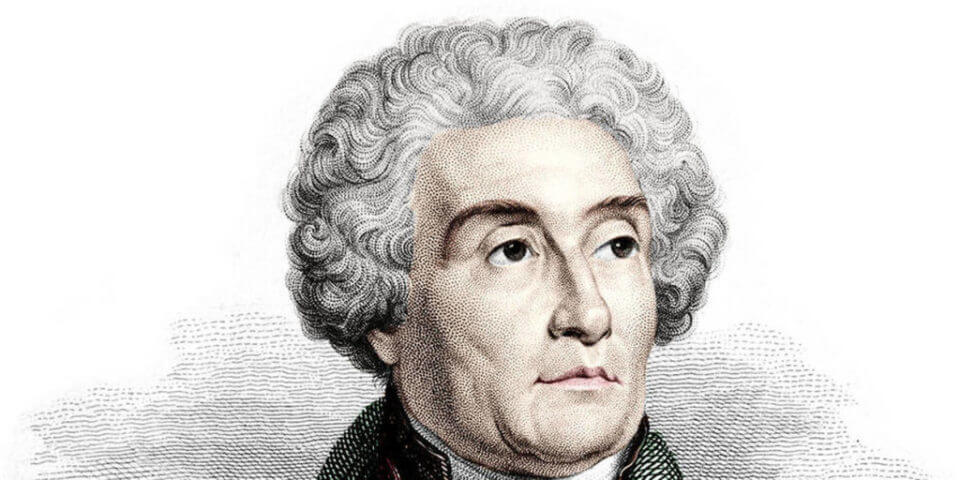 “Notice how Maistre does not consider the actions of the people valid because they committed a crime against the nation by undermining its sovereign.”

Over the last few months, I have been preparing for the publication of my two books on post-modern conservatism. The first is called What Is Post-Modern Conservatism?: Essays on Our Hugely Tremendous Times and is a collection of essays for Zero Books. This is designed as a more informal introduction to the topic. The second, The Rise of Post-Modern Conservatism for Palgrave MacMillan, is a more academic monograph that sketches out a critical theory of neoliberal society and post-modern culture. My point is to demonstrate how reactionary movements could emerge in such a context. But the book also develops a brief genealogy of post-modern conservatism, tracing elements of it back to the thinking of Edmund Burke, Michael Oakeshott, Lord Devlin, and other luminaries. My point with this genealogical approach is not to establish that these figures are post-modern conservatives in gestation—but rather to showcase how elements of their thought could mutate in that direction under the correct social and cultural conditions.

The most obvious forebear of post-modern conservatism was, in fact, none of these figures but rather a minor nobleman from Savoy. I am referring, of course, to Joseph de Maistre, famously hailed by Isaiah Berlin as the key figure of the counter-Enlightenment and a predecessor to many forms of reactionary politics. In these two essays, I will be discussing how Maistre’s outlook anticipated the emergence of post-modern conservatism while also discussing how it is fundamentally limited as an approach to the world and society. My hope is that this will provide a sense of historical clarity and continuity when evaluating the contemporary situation

Joseph de Maistre was born into the nobility of the Kingdom of Piedmont and Sardinia in 1753. His father was a senator and was later promoted to Count by the King. Maistre received a fine education, probably at the hands of the Jesuits. This may incline one to interpret him as a quasi-scholastic conservative in the vein of Ignatius of Loyola. And indeed, there is something of the Church father’s reverence for authority in Maistre’s work. But what is paradoxically novel about Maistre is the manner in which he came to violently defend the past using extremely novel intellectual means. The stately and magisterial prose of Jesuit writings is nowhere to be found in his oeuvre. Instead, one gets denunciations, scathing insults, and apocalyptic dualisms.

There is something of the Athenian public’s denunciation of Socrates as a “corruptor of youth” behind most of Maistre’s analyses.

As one might expect, Maistre’s outlook was as much shaped by temperament and situation as reflection. He was initially a very tepid supporter of liberal reforms and even agreed with Louis XVI’s summoning of the Estates General. Though this may, in part, have been because his family owned land in France and stood to benefit from increased representation. Unfortunately, this flirtation with the Enlightenment came to a screeching halt when the French Revolution broke out. Maistre was horrified by the development and quickly made a name for himself as an impassioned defender of traditional authorities. The Revolutionary Wars damaged his family’s station, and he spent much of the period working for the King of Piedmont and Sardinia in exile, while writing critical notes on the happenings of the world. He eventually made his way to Russia, where he hoped to find a good religious people free of the taint of the Enlightenment. He was sadly disappointed, and Maistre’s often critical ruminations on Russian society found their way into Tolstoy’s War and Peace. His family’s fortunes were largely restored with the defeat of Napoleon in 1815. When he died in 1821, Maistre might have felt some satisfaction in witnessing the French monarchy restored and the Revolution’s changes apparently reversed. Of course, this was wistful thinking on the part of many reactionaries, as it turned out the genie could never be fully put back into the bottle.

As a thinker, Maistre nicely embodies Corey Robin’s characterization in The Reactionary Mind. He is anything but concerned with consistency or philosophical rigor, occasionally even dismissing philosophy as a whole for its tendency to make individuals skeptical of political and epistemic authorities. There is something of the Athenian public’s denunciation of Socrates as a “corruptor of youth” behind most of Maistre’s analyses. He continuously denounces reason as a destructive force which, at best, must be carefully kept in its place and, at worst, rejected entirely. As he put it in his short text Considerations on France

“Some of the men of this age seem to me to raise themselves at moments to a hatred for Divinity, but this frightful act is not needed to make useless to most strenuous creative efforts: the neglect of, let alone scorn for, the great Being brings an irrevocable curse on the human works stained by it.  Every conceivable institution either rests on a religious idea or is ephemeral. Institutions are strong and durable to the degree that they partake of the Divinity. Not only is human reason, or what is ignorantly called philosophy, unable to replace those foundations ignorantly called superstitions, but philosophy is, on the contrary, an essentially destructive force.”

But like all reactionaries, there is also a covert admiration and even awe of his enemies beneath the shrill accusations. Thumbing through most of Maistre’s political works, one finds very few positive political programs. There is little in the way of standard argument for a given position—and nothing of an effort to be even-handed. Instead, there is a constant fascination with the power and sweep of the demonic events taking place and an acknowledgement of their rationalizing power. Against it, Maistre summons the specter of irrationalism and reverence for authority—not because the worth of these can be demonstrated rationally, but because failure to identify and believe in them leads to an upset in the status quo and the erosion of traditional authorities and values. Maistre was a great irrationalist for whom identity and traditional values were granted authority because they were necessary to stabilize the world. This is not an argument from reason—but at its base an emotional appeal to our need for the world to make sense. This, of course, means that the elements of the world which trouble the idylls of irrationalism must be fought off with ferocity and scorn.

The power which can be counted on to carry out this task is, of course, political authority.  This is because political authority always has a vested interested in maintaining the status quo, which will make it at least skeptical of the probing inquiries of reason into its basis and justification. Here, Maistre is characteristically waffly in his logical argumentation but illuminating in what he choices to privilege and emphasize. He wants to emphasize the glory of political authority without providing a reasoned argument for its legitimacy, which would, in turn, vindicate the rationalist Enlightenment project Maistre so detests. One needs to find a way to vindicate authority without using reason, and so he suggests that reason provides a legitimating basis for political authority which can later be withdrawn if it ceases to operate rationally.

Sometimes Maistre turns to Burkean arguments about providence to attempt to square this circle. He suggests that God operates within the world to establish a given society and social hierarchy that is too his liking. To reject this providential design constitutes a form of Satanic pride, a willingness to go against God’s wishes to impose one’s own preferences onto the world. Unfortunately, this position is highly problematic and self-contradicting. If God operates providentially within the world, couldn’t one just adopt Hegel’s position about any developments which one happens to disagree with? Wouldn’t the French Revolution itself be a providential development willed by God? Why would God allow such an event to occur if it ran so contrary to his plan, while at other times operating to develop a social hierarchy entrenching authorities more to his liking?

Here, Maistre becomes clearer on what he really means. One is not to probe too deeply into these matters because the will of God and the legitimacy of society are forever hidden from reason. Asking these questions is the first step on the road to hell. At times, Maistre even acknowledges that the real basis of all political authority will always be fear of violence and awe of the sovereign power. This is why the real basis for authority will always be terror and the threat of violent punishment. As Maistre put it while reflecting on the execution of Louis XVI:

“…every offense committed against sovereignty, in the name of the nation, is always to a greater or lesser degree a national crime, since it is always to some degree the fault of the nation if any faction whatever is put in a position to commit the crime in its name. Thus, although no doubt not all Frenchmen have willed the death of Louis XVI, the immense majority of the people have for more than two years willed all the follies, injustices and offenses leading up to the catastrophe…Now, every national crime against sovereignty is punished swiftly and terribly; that is a law without exception…Each drop of Louis XVI’s blood will cost France torrents; perhaps four million Frenchmen will pay with their lives for the great national crime of antireligious and antisocial insurrection, crowned by regicide”

This may seem like mere reactionary vitriol, but it conceals a truly important point. Notice how Maistre does not consider the actions of the people valid because they committed a crime against the nation by undermining its sovereign. The consequence of this will be the death of millions, which he almost seems to welcome as just punishment for a horrible crime. Here Maistre strongly anticipates a unique characteristic of post-modern conservative discourse: the nation is not regarded as primarily being about the people as a whole. Rather, it is assimilated to the person of authority, who, in turn, embodies reverence for tradition and fear of destabilization. In other words political authority helps stabilize the identity of the nation, operating in a mutually constitutive relationship where one side must hold all the real power. As I shall demonstrate in my follow-up piece, this is strikingly close to what we see today in many post-modern conservative positions.

Matt McManus is currently Professor of Politics and International Relations at TEC De Monterrey. His book Making Human Dignity Central to International Human Rights Law is forthcoming with the University of Wales Press. His books, The Rise of Post-modern Conservatism and What is Post-Modern Conservatism, will be published with Palgrave MacMillan and Zero Books, respectively. Matt can be reached at garion9@yorku.ca or added on Twitter via Matt McManus@MattPolProf

One thought on “Who Was Joseph de Maistre? (And Why He Matters)”