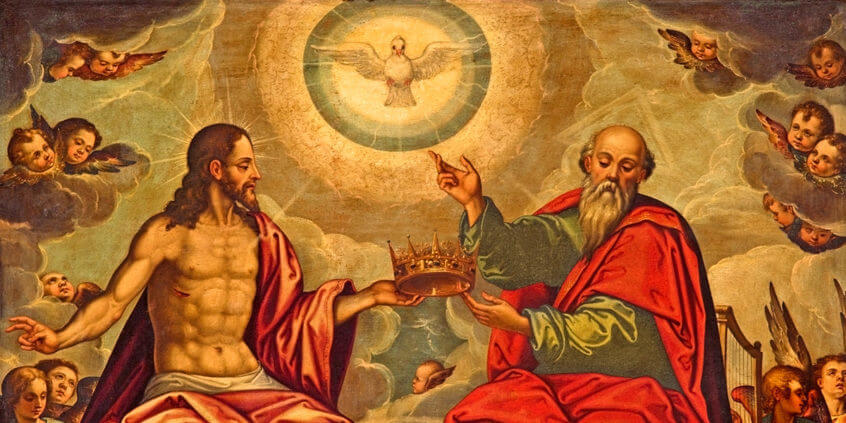 “However, [Peterson’s] general statements about God do, or would, find a home in Catholic and Orthodox theological dogma and tradition.”

Several of Peterson’s claims about God would square well with the Catholic Church and are in line with the Patristic Fathers, especially Saint Augustine. The identification of Christ, who is fully God, with the Logos is not only made by St. John in the opening prologue of his gospel; it is also done by St. Justin Martyr, St. Augustine, St. Athanasius, St. John Chrysostom, and all the orthodox early Church Fathers. It is true that Gnostics and other heretical sects did as well, and they denied the fully human aspect of the incarnation of the Logos. But Christ, as the Logos, is universally shared among the Church Fathers. More recently, Pope Benedict XVI spoke on the role of Christ as the Logos and the implications for rational theology since Reason became incarnate and was a person in orthodox Christology.

In his spiritual autobiographical and theological masterpiece, Confessions, Augustine took the time to confront those who denied that the Logos was responsible for creation and bringing order to the void of the nascent creation. “In the beginning,” Augustine argued in his books on time and creation, meant “In the Word.” As Augustine explained, “On the basis of all these axioms, a view may be urged to this effect: ‘In the beginning God made heaven and earth’ means that by his Word coeternal with himself God made the intelligible and sensible (or spiritual and corporeal) worlds.” Seven of Augustine’s surviving homilies on John 1 link the Logos, who is Christ, with the act of creation back in Genesis 1.

That God speaks and brings order and renewal in the Christian tradition—indeed, in the Scriptural tradition—is one of the defining hallmarks of Abrahamic uniqueness against the pagan gods who are born out sexual violence, lust, or rebellion (cf. Hesiod’s Theogony or the Enuma Elis). Because God speaks, rational dialogue—the diálogos (διάλογος)—is another defining feature of the theophanies of the Old Testament. The patriarchs and prophets are not being overwhelmed by the God of light and flame whom they encounter, but have a conversation with God, who recalls them to life and truth. Rather, they converse, or dialogue, with God. Patristic interpretation always maintained that the Angel of the Lord whom Moses spoke to in the Burning Bush was Christ in preincarnate form and the various appearances of the Angel of the Lord in the Old Testament to whom many of the Old Testament heroes conversed with was the preincarnate Logos precisely because they were engaged in conversation.

The tradition of the prophets is all about the Logos, which patristic authors were well-attuned to. God speaks through the prophets. It is not that the prophets are speaking. It is God speaking his message of truth to the Israelites to follow him, order themselves to truth, and be lifted out of the chaos of sin. Whenever the prophets begin the divine utterances, it is usually rendered in the English as “Thus saith the Lord God,” or “Hear the words of the Lord.” Ezekiel’s dramatic vision of the valley of dry bones captures this dynamic: “Thus says the Lord God to these bones: Listen! I will make breath enter you so you may come to life.” Christ, in the flesh, also informs his disciples in the Gospel of St. Luke, “Whoever listens to you listens to me.”

In Genesis 1, God calms the chaotic abyss by calling order to it in forming light and darkness. In fact, Augustine reads Genesis 1 as a prefiguring account of the human life of being called from the chaos of sin to an ordered and rational life by the Word of God in the thirteenth book of Confessions. This act of calling chaos to order is also repeated in all the synoptic gospels when Christ, as the Logos incarnate, calms the stormy seas of Galilee through an act of speech. St. Paul also informs the Corinthians that their God is a God of order and not of chaos and that all things find their order and renewal in God.

God calls men to become men, to be adventurers, protectors, and the leaders of sacrifice. Indeed, the call of God is a sacrificial calling because men must leave behind their homelands, their homesteads, and sometimes their families, to embark on the perilous journey which left the apostles shipwrecked, imprisoned, and eventually martyred for the sake of others.

When Peterson claims that God is the “voice of conscience,” he is still in line with orthodoxy. The Moral Law, which Paul speaks of as being written on the hearts of humans, has traditionally been understood as part of the image of God linking God with us and us with God. In De Trinitate, Augustine argues that the image of God is in the moral intellect of humans calling us to higher heights of moral consciousness and duty. This leads to greater love binding persons together in relations of love, which mirror the loving relations of the Trinity. In our participation with love and the moral law, we participate in, and with, the Trinity. The image of God, which is the image of the Trinity, is in the human mind according to Augustine and in Catholic anthropological doctrine. St. Bonaventure linked the moral conscience of humanity with God’s message to be lifted toward that heavenly reality. Finally, Gaudium et Spes states that the moral conscience of humans is God’s voice, which “echoes in his depths” and is the organic fulfillment of this long Catholic tradition being fleshed out.

That God is the calling of men to the invitation of adventure is also a sacred tradition in Catholicism and Orthodoxy. God called to men throughout the Bible. God called Abraham to venture out of Ur Kaśdim to be a founder of a great nation and from whom all the nations of the world would be blessed. God called Moses to lead the Israelites out of Egypt. Christ called the apostles out from their jobs, mostly fisherman, and they left their fathers to follow him on the new adventure through Galilee (cf. Mt. 4:21-22). God calls men to become men, to be adventurers, protectors, and the leaders of sacrifice. Indeed, the call of God is a sacrificial calling because men must leave behind their homelands, their homesteads, and sometimes their families, to embark on the perilous journey which left the apostles shipwrecked, imprisoned, and eventually martyred for the sake of others.

St. Athanasius, in explaining the doctrine of the incarnation, wrote that “God became man so that man might become god.” What Athanasius meant was that through divinization—a dogmatic doctrine in Catholicism and Eastern Orthodoxy also called theosis—we become partakers in the divine essence. We, like God, in becoming partakers in the divine nature, would have the power to bring healing love to a broken world, bring order to chaos, and restore the balance of the lost harmony of original justice. To become divinized entails that we become conduits of God’s grace and power in the world and restore the relationships we lost because of the Fall, the relationship between humans, the human relationship with creation, and, of course, the human relationship with God.

Furthermore, God is the highest value in the hierarchy of values. This is another case of dogmatic Catholicism. There exists a gradation of values in the created order and it is, indeed, hierarchal. The fact that Catholic theology and cosmology is hierarchal is the reason why Catholicism has often been militantly targeted by egalitarian movements. Those who might point to egalitarian Catholic movements do so in bad faith—Catholic theology, for better or worse, has never been egalitarian and never will be.

God is the Supreme Good and Truth itself (CCC., no. 1732; CCC., no. 215). As the Source of all lower goodness, the lesser goods find their ultimate fulfillment in, and through, God. Where Platonism entailed the shedding of lesser goods, Catholic theology argues that lesser goods find greater fulfillment in being loved under the subordination of God. Or, rather, in loving God we are better able to love the lesser goods God has provided us and the rest of the world. Here, Mr. George is spot on that Peterson’s critique of Christianity’s otherworldliness is more caricature than reality; St. Thomas Aquinas argued that it is because of God that we can live meaningful and purposeful—indeed, loving—lives in the world.

It is true that Peterson is not often clear about the concepts he discusses and hides behind a veil of Jungian language that oftentimes obscures rather than makes clear. It is true that Peterson does often veer into Gnosticizing abstractions that dilute the concreteness of traditional Christianity—but so do many contemporary Christians. It is also true that Peterson is undeniably a heterodox Christian in whatever manner he may consider himself to be a Christian. However, his general statements about God do, or would, find a home in Catholic and Orthodox theological dogma and tradition.

Scripturally, dogmatically, and traditionally, Christianity affirms that God (in the second person of the Trinity) is the Logos. Likewise, Christianity does affirm that God does bring order out of chaos. Moreover, God brings order out of speech. Our encounter with God is, as in Sacred Scripture, an encounter with the Word. That the Bible contains the revelations of the Word of God is why Scripture is considered the word of God. Precisely because of this reality the German Idealists, like Friedrich Schelling and Georg W.F. Hegel, regarded Christianity as the penultimate rational religion. Whatever his faults, Peterson’s obfuscate language about God are more orthodox and traditional than is initially apparent. In this regard, Peterson should work on his clarity, since the point of God as Truth and the Logos is clarity rather than obfuscation.

Paul Krause holds an M.A. in theology from Yale and a B.A. in economics, history, and philosophy from Baldwin Wallace University.