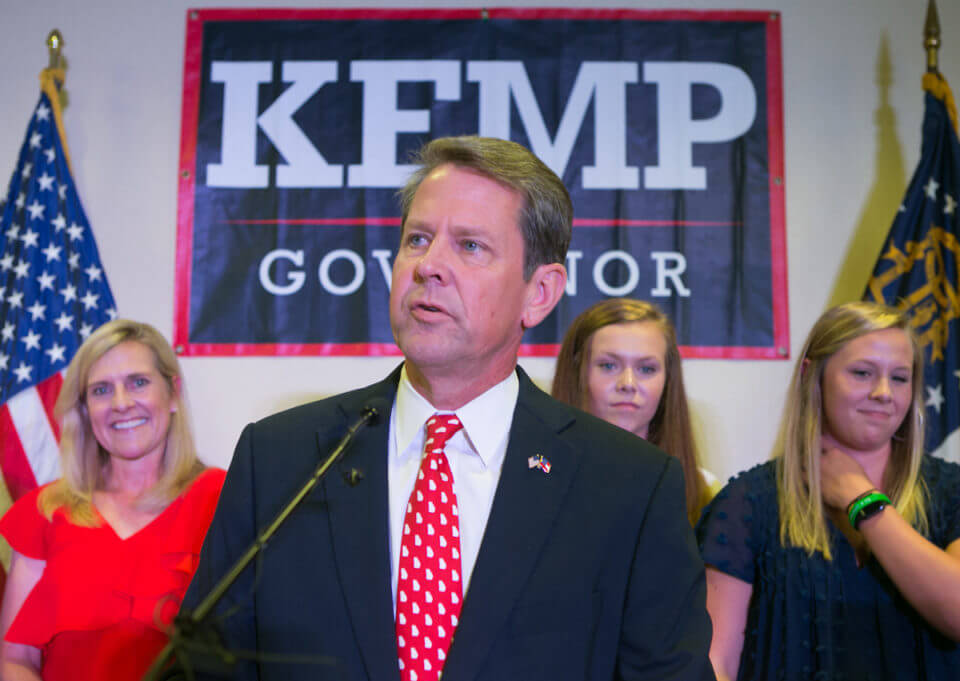 “I know that you can’t completely run government like a company, but you can bring in business principles and processes.”

On January 16th, 2018, former Georgia Secretary of State and small business owner, Brian Kemp, joined Merion West’s Henri Mattila for an interview to discuss his vision for Georgia as he campaigns for Governor.

Thank you for joining us today, Secretary Kemp. For our readers who aren’t familiar with your background, could you tell me a little bit about why you chose to enter politics?

Oh gosh, well, it was really back in the early 2000s. I was a small business owner, which I still am today, raising a young family, in Athens, Georgia. I just really became frustrated with the government and the leadership we had serving in the Georgia State Senate, so I decided to do something about it. I ran for the legislature against an incumbent, and just barely beat him, and served two terms in the legislature. But that’s really what drove me to get involved; I was just kind of frustrated with government bureaucracy, over-regulation, high taxes and people just not using good common sense in government, and using politics for power and not for putting the people first.

So when you were a small business owner, were there any particular laws or policies you found to be hurting your business?

Not necessarily hurting my business, but it made it aggravating not only for me — you know, I had a construction company and I was involved with the local homebuilders association — and we were dealing with all kinds of regulatory issues and legislative-type issues, like the requirements were one thing for one county and different in another. There were things like that, which were just so frustrating.

On a note regarding regulations, your campaign material says that you will take a “chainsaw to ridiculous regulations and burdensome mandates.” What would be the first regulation that you intend to cut out from the books?

It’s not hard to do; I challenge my people in the Secretary of State’s office with that every day, and we’ve done it over and over again. You know, something as simple as taking a notary public requirement off of a one-page form and redoing our corporate filing system where now you can even file your annual registration with one click of the button.

I see, so you plan to employ technology to make government more efficient?

The thing about government — government is so slow to change. And there’s, you know, things that were put in place years ago from the time that we got in, which don’t really apply today with modern tech or today’s rules. Those are the things we need to get rid of and redo. And that’s the kind of thing I want to do, as well as use technology to improve the efficiency like the private sector would do. I know that you can’t completely run government like a company, but you can bring in business principles and processes, which can move that needle.

And now we measure that every day—we have the ability to do that. We can find out at any time what our call center wait times are, what are our abandonment rates are—all those things. If we get a complaint, the only thing we have to do now is get the number from the person that complained and the time they called. Then, we can go back and listen to that call and decide if that person is actually telling the truth  about what happened and whether we need to fire a call center operator.

That seems like a good way of bringing business principles to government functions. On a related note, are there any policies in place at the moment that the current governor supports, but you might disagree with?

None that really come to mind. There’s certainly some things I would have done differently, but I’m not really dwelling on the past; I’m looking to the future, and I’ve got a future-oriented four-point plan. And that’s what I’m focused on.

This has been in the news nationally: many states and cities around the country have been competing to get Amazon’s second headquarters. It looks like Atlanta and the State of Georgia have put together quite a compelling proposal to the company. Critics from both the Left and Right often say that these tax incentives amount to corporate welfare. What is your response?

I definitely support Amazon coming to Georgia. I think we are a logical state for them to establish a second headquarters: we’ve got a good business environment, low taxes, and we’ve got a lot of assets that a company like Amazon would want to take advantage of: such as the world’s busiest airport. And just look at the number of big companies we’ve had move here, as well as the talent that we have to fill the jobs they would be creating. Certainly, I believe there would be a lot of people moving to Georgia if Amazon were to come. But certainly it wouldn’t be the end of the world if we don’t get Amazon; we’ve got a great economy that’s very diverse. We’re doing a lot of great things in the state. I do think that we have a good shot at it.

And I think that the Amazon matter is certainly something the Governor, the Department of Economic Development and the city of Atlanta are working on. Not too many people are privy to what’s in there, so I wouldn’t want to speculate to that. But we’ve passed up on opportunities where the juice wasn’t worth the squeeze; there was that Volvo plant for example that went to South Carolina and things of that nature.

As you know, medical and recreational marijuana has been effectively legalized and decriminalized in many states, such as California and Alaska. Right now, Attorney General Jeff Sessions has been given full authority to prosecute states that violate federal laws regarding marijuana. Do you think these states are making a mistake by not complying with federal laws on marijuana?

I wouldn’t want to speak to what another state is doing, especially California; it would be hard for me to comprehend most of what they’re doing. From my perspective, that’s one of the things that concerns me, is that by legalizing it on a state level, you could be putting your citizens in a jeopardizing situation where they think they are following state law but can be prosecuted for violating federal law. I have great concern with that. I’m certainly not in the camp of being pro-recreational marijuana.

I do think though, from a medicinal standpoint, I am very open-minded about that. I am very supportive of what our legislature has done in the past, and we’ll continue to keep taking a look at that. I know there are many parents in Georgia who are using that medicinal marijuana with good results. As a parent myself, I understand that if that’s the only remedy you have, you’re going to use it if your child is sick or is having seizures or anything else. So I’m certainly open to that as we move forward.

Let’s talk about adoption. On your campaign website, it says that “As Governor, Brian Kemp will repeal the red tape that prevents children from finding an immediate home.” Could you tell me a little bit about this red tape?

Well, there’s been a big fight in the legislature in the last year or so about bringing in antiquated adoption laws to the 21st century. I’m supportive of that, as it’s basically a re-write of the code. My reform package is even more than that: it’s trying to speed up the process, streamline it, and give some incentives to lower the cost so that they could actually move the needle on adoptions. And not just for kids who are in the care of the state, but any adoptions. That’s why we’re increasing the tax credit; we’re going to set up an escrow account option where you can basically be pre-approved for adoptions, which would speed up the process. You’ll have your money held in an escrow account that helps to protect it from unscrupulous people who might be trying to facilitate those things and take advantage of people who have wanted to become good, loving parents.

Being pro-life, I think it’s really putting our words into actions, and this will help allow people to adopt and to do it quicker, while reducing the costs a little bit.

Thank you for joining us today, Secretary Kemp. I wish you the best of luck in your campaign.

Glad to talk with you, thank you.

One thought on “Interview: Small Business Owner and Candidate for Governor Brian Kemp”