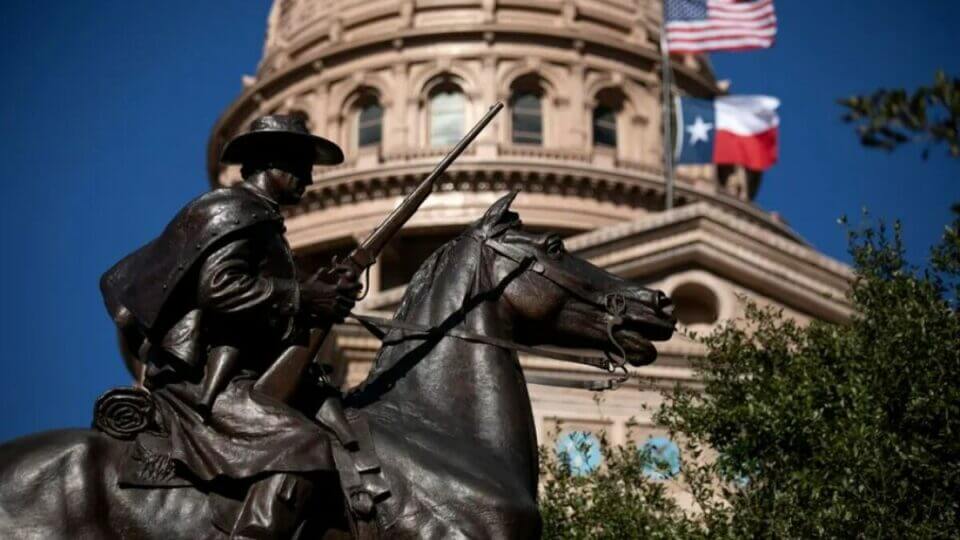 “As we come to know more about the morally repulsive aspects of our national history—and, more importantly, face those realities—removing symbols of our collective failure in the past is not an attempt to deny our history. Rather, it is a sign of growth, a willingness to face our history.”

The Confederate States of America (CSA) dissolved in 1865.

The United States of America legally renounced the CSA’s white-supremacist ideology in the civil-rights and voting-rights legislation passed in 1964 and 1965.

But this week the state of Texas once again marked “Confederate Heroes Day,” as it has since 1973. And for the third straight legislative session, a state representative had filed a bill to end recognition of the day as a state holiday, which has about as much chance as passing this time as it did in previous sessions.

The controversy over the public display of Confederate symbols seems to be a permanent part of American politics and culture.

Here is another recent example, from a civil-rights complaint filed this month against the Effingham County School District in Georgia that alleges “deliberate indifference to racial animosity toward Black students” and “viewpoint discrimination in dress code.”

“two students scrawling racial epithet across lockers in the baseball locker room; a noose being hung in the football locker room; students wearing Confederate flag attire; a white student wearing a full Hitler costume during spirit week after obtaining prior approval from a teacher; white students’ open use of racial slurs including ‘n—’; overtly racist remarks by a white teacher and open and notorious display of Confederate flags in the building.”

In many places, Confederate symbols have been removed from public spaces after protests, almost all of which were led by African Americans. In other locations, the symbols remain, almost always when white people dig in their heels. Not all people on the political right support these public displays, but support for them comes almost exclusively from the Right, primarily in the South. I have never met anyone in my experience on the political left who embraces these symbols.

I have been pondering how to make the argument for removal since I took a job teaching at the University of Texas at Austin (UT) in 1992. I was among the faculty who periodically argued that the statues of Confederates, including president of the Confederacy Jefferson Davis, that were prominently displayed on the main campus mall should be taken down. UT students and faculty, led for years by anthropology professor Ted Gordon, had been making that argument before I arrived on campus, but it was not until 2017 that the UT president finally ordered them removed.

To work through this, let us consider an argument from analogy to Nazi Germany. Such arguments have to be scrutinized for false analogies, and Nazi comparisons are almost always hyperbolic and inappropriate. But in this case, a Nazi analogy is right on target. Both regimes embraced the glorification of one group in society and the subjugation of others, driven by economic interests, dreams of the special status of a nation or region, and overt racism. This is not a case of “presentism,” of judging historical events by contemporary values. Critiques of both political projects are made not only today but were made at the time of these regimes, both within those societies and by people outside them. Although the time frames for each project were different, the Nazi genocide campaigns and the slave trade that the Confederates defended were both responsible for millions of deaths. In both cases, war was necessary to eliminate such odious political projects.

What is the main response of Confederate sympathizers? We are told that such symbols are about “heritage, not hate,” that support for a continued Confederate presence in public spaces is simply a way to honor ancestors who fought bravely, even if for an illegitimate cause. (Even most supporters of Confederate symbols have given up the embarrassing argument that the CSA fought for states’ rights more than for slavery.)

In the United States, there is a group called Sons of Confederate Veterans, which unsuccessfully sued UT to block the removal of the statues. Members of that group openly identify as such in public. Can anyone imagine a group called Sons of Nazi Veterans? If there were such a group, would most members proudly affiliate with it? Since the end of WWII, there have been fascist groups in Germany that believe in the glory of the Third Reich, but no one in mainstream politics endorses such historical denialism, and laws in Germany today outlaw hate speech and Holocaust denial. (I point that out not to endorse laws restricting speech, but to point out that Germany takes seriously attempts to glorify a Nazi past.) Yet in the United States, politicians from one of the two major political parties have for years embraced honoring the “heroes” of the Confederacy. (Today, that is the Republican Party, while decades ago in the American South, the Democrats were the party of white supremacy. The parties shifted racial ideologies in the 1960s.)

Imagine that Nazi sympathizers in Germany argued that they were simply celebrating their heritage and not expressing hate. Would anyone take that claim seriously? If the heritage one embraces involves a political position that was morally unacceptable at the time, how is honoring that heritage morally acceptable today?

This says nothing about how one feels about relatives and neighbors, living and dead. People can, and routinely do, feel affection for people whom they love, even knowing those people’s serious moral failures. And people’s motivations for participating in morally unacceptable actions can vary. There were small farmers in the American South who owned no slaves but fought out of a sense of regional loyalty or because they saw war as necessary for self-preservation. Some might even have had a prescient critique of the inherent degradation of the industrial society that was emerging in the North. But none of those reasons makes the CSA morally acceptable.

Honoring one’s ancestors does not require waving the Confederate Battle Flag at a football game; there are many other ways people routinely honor relatives through gatherings and remembrances. That suggests that anyone waving that flag has other motivations. Again, the analogy: If the grandchildren of German farmers argued that they were honoring their grandfather’s service in the Wehrmacht by waving a Nazi Swastika Flag at a football match, would we approve? There are ways to express affection for one’s ancestors and region or country without using symbols that are not only morally repugnant but also a reminder to those subjugated that they are still not accepted as fully human.

Why are the kinds of symbols that are almost universally rejected in Germany acceptable to many in the United States? While both Nazi Germany and the CSA lost the wars they fought, the Confederate worldview endured despite the defeat. A neo-Confederate regime emerged after the end of Reconstruction with new strategies but the same goal of using racism to shore up dominance, with a “Lost Cause” mythology of Southern moral superiority. Germany was forced to come to terms with the horrors of Nazism by outside forces. The Confederate states evaded such accountability for a century, and many in them still embrace a neo-Confederate ideology.

There are objections to this analysis that deserve response.

First, are there not more important struggles for racial justice than symbols? Yes, of course there are. Racialized disparities exist in a long list of measures of wealth and well-being: maternal health, access to quality health care, high school graduation rates, home ownership, and many more. All these material realities could be said to be more important. But nothing prevents those who defend Confederate symbols from agreeing to eliminate them from public view and addressing racialized disparities. And how many of the people who make this argument about the priority of changing the material conditions are involved in projects to do that?

Second, did not racism also exist in the North in the Civil War era? Of course, and it still exists today in the North, and throughout the United States. But that has no bearing on whether public display of symbols of the Confederacy is acceptable. To say that a particularly overt and public display of neo-Confederate ideology should not be critiqued because more subtle forms of racism exist elsewhere is an empty argument. By that measure, no moral accounting would be possible until we reach utopia.

Third, did not previous American leaders who are honored with statues, such as Presidents George Washington and Thomas Jefferson, also own slaves? Have other prominent leaders from the past, such as Presidents Theodore Roosevelt and Woodrow Wilson, also been overt racists? Yes, and both those realities raise uncomfortable questions yet to be resolved. The standard answer is that none of those leaders committed treason against the Constitution of the United States. Fair enough, but that does not automatically make them moral exemplars worthy of secular deification. Presidents Washington and Jefferson never faced the question of whether to support a unified country or support slavery—because they were part of a government dominated by slave owners who were able to write slavery into the Constitution through the three-fifths clause. Presidents Roosevelt and Wilson also never were tempted to commit treason since they ran governments in which white supremacy was the norm and facilitated imperialist and racist federal policies.

Since I am not a fan of flags and statues in the first place—I believe in universal principles not national glorification, and I have never been fond of hero worship of any kind—it is particularly easy for me to support taking them all down. As we come to know more about the morally repulsive aspects of our national history—and, more importantly, face those realities—removing symbols of our collective failure in the past is not an attempt to deny our history. Rather, it is a sign of growth, a willingness to face our history. Such work is not mere political correctness or wokeness but a sign of maturity, intellectual and moral. It is nothing more than common decency.

One last objection to consider. Do some of the people opposed to Confederate symbols hold prejudices against Southerners and rural people more generally? I certainly have heard many Northerners and city people with progressive politics speak in ways that suggested a denigration of the intelligence of others. More common is a sense of smugness about country people from urban dwellers. These are morally offensive attitudes. But the fact that one’s critics may have moral failings of their own does not justify one’s own morally-lacking attitudes and behavior.

Robert Jensen is Emeritus Professor in the School of Journalism at the University of Texas at Austin and collaborates with the New Perennials Project at Middlebury College. He is the co-author with Wes Jackson of An Inconvenient Apocalypse: Environmental Collapse, Climate Crisis, and the Fate of Humanity (University of Notre Dame Press, 2022). His other books include The End of Patriarchy: Radical Feminism for Men (Spinifex Press, 2017); Plain Radical: Living, Loving, and Learning to Leave the Planet Gracefully (Counterpoint/Soft Skull, 2015); Arguing for Our Lives: A User’s Guide to Constructive Dialogue (City Lights, 2013); among others. He can be found on Twitter @jensenrobertw.