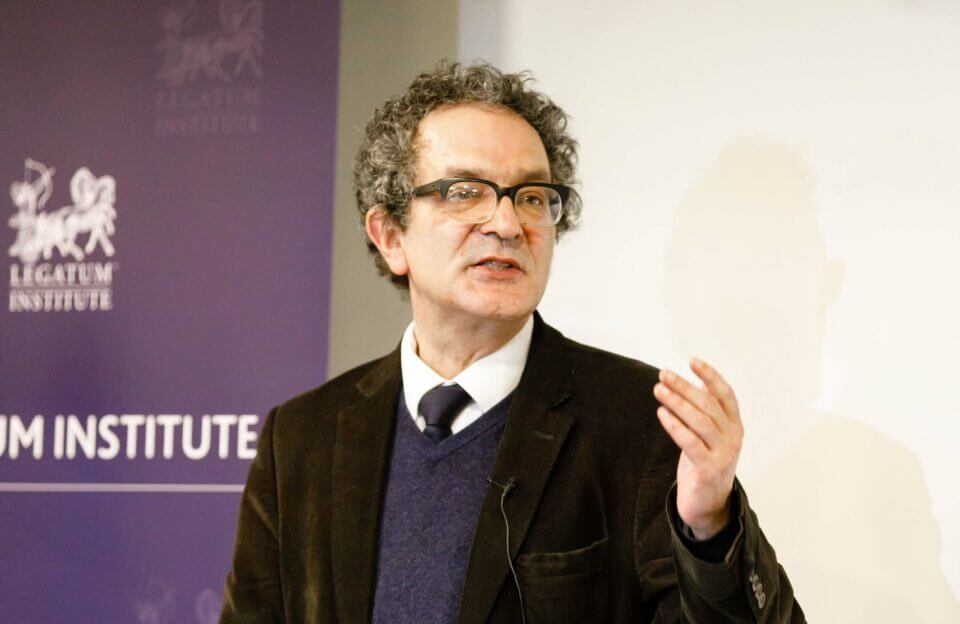 “For Labour forgot that life involves loss and tragedy. It forgot that ‘human beings are not commodities, but creative and social beings longing for connection and meaning.'”

Allow us to imagine for a moment the British Labour Party as a human being. We know that it is immensely dysfunctional, prone, of late, to adventurism (consider Iraq), grandiosity (think an end to boom and bust), and self-loathing (recall Owen Smith’s bid in 2016 to topple Jeremy Corbyn and the formation, in 2019, of Change UK). But what kind of parents would it have? Is this internal disharmony just a blip? Or would they be dysfunctional too? Did, in other words, Labour’s parents “f— them up?”

According to Maurice Glasman, the theorist of Blue Labour, Labour is “the child of a cross-class marriage between a decent working class dad and an educated middle class mum.” The dad was the trade unions, the cooperative movement, and building societies and mutuals. The mom was the intellectuals: the Fabian Society, the Social Democratic Federation, and members of the Anglican clergy. The dad was Aristotelian, in favor of tradition and the common good, the mom Platonic, radical, and progressive.

“The problem in the marriage,” Glasman averred, “was clear from the start.” Disempowered at work, since Labour failed to push for democracy in corporate governance, and in the home as well, since nationalization, implemented by technocrats, became the exclusive form of social ownership envisaged by Labour, increasingly, the dad was subject to the mom’s abuse.

In 2011, when this was written, Glasman counseled that the grandparents ought to step in to help rebuild love and reciprocity within the relationship. Now, three unsuccessful elections later, he advocates something different. He is more trenchant in his criticism of the mom’s behavior. Moralistic, universal, and abstract, under the influence of the mum, Labour has, in effect, been liquidated he argues in his new book Blue Labour: The Politics of the Common Good. The dad must, in short, assert his influence anew.

Few observers of British politics will be unfamiliar with Glasman. Cigarette in mouth or drink in hand, he is a worldly unworldly figure. Neither bona fide traditionalist Tory nor fully automated revolutionary socialist, Glasman is an intensely unfashionable bohemian, prepared to talk amicably to the English Defence League or Nigel Farage. Launched without fanfare but with much promise in 2009—Glasman himself was appointed a Labour life peer by Ed Miliband in 2011—Blue Labour’s initial success has not been sustained. From distinguished guru at the center of power, Glasman is now more like an eccentric uncle, repetitive and preachy, but, above all, well-meaning and, for the most part, wise.

He is (still) melancholic. Things just have not gone his way. In Blue Labour, he does not outright say, “Your father ought to have left your mother.” But it is implied.

Now this may seem paradoxical perhaps for a movement which stresses the importance of the pursuit of the common good. Paradox, however, is what Blue Labour is all about. What Glasman admires so much about the Labour tradition is that “it is robustly national and international, conservative and reforming, Christian and secular, republican and monarchical, democratic and elitist, radical and traditional, and at its most transformative and effective when it defies the status quo in the name of ancient as well as modern values.” With New Labour, however, the intellectuals went too far.

The blue in Blue Labour could be evocative of a particular political disposition, namely conservative. Certainly, Glasman celebrates the unconscious Burkeanism he identifies at Labour’s historical core: its custom-adhering, institution-respecting, and attachment-forming tendencies. But what the blue is really meant to evoke is a mood. In 2009, Glasman felt thoroughly alienated from the party he had always identified as his own: the party of the working class. Its “uncritical embrace of globalization, the domination of finance capital” it had unleashed, “combined with a pitiless progressive modernism, left no place for workers in the movement they had created.” Things do not only get better, Glasman reminds us; under New Labour, after the financial crash of 2008, they got worse.

For Labour forgot that life involves loss and tragedy. It forgot that “human beings are not commodities, but creative and social beings longing for connection and meaning.” And it forgot that “nature is not a commodity either, but a condition of life and a sacred inheritance.” Those who benefitted from Prime Minister Tony Blair and Prime Minister Gordon Brown’s continuation of Thatcherism were the rich and the educated. Former Labour leader Jeremy Corbyn almost revived what had been lost. He believed in decommodifying human beings and restoring sovereignty to the nation. However, after the election of 2017 the initiative passed to what Glasman calls the “Mercurians,” the swift and mobile, city-dwelling and money-valuing section of the population. The “Apollonians,” those rooted in place and representing stability and honor, were cast out.

Blue Labour is, without doubt, an interesting book. As ever with Glasman, there are flashes of brilliance. When, for example, he defends the Blue Labour project against the charge of nostalgia, he draws attention to the provenance of the word—a translation of the Greek word for a longing for home. A “home is not an eternal birthright,” he argues compellingly, in a realist vein, against those who detect an undue sentimentalism in his politics, “or rooted in an uncontested homeland.” Rather, it is “a contingent and provisional achievement. Every settlement is a negotiated settlement. A home in the world is a political achievement.” Or, when Glasman rails against the architect of New Labour, Philip Gould, his analysis is similarly cogent: “All the fallacies of Marxism were being uncritically appropriated in terms of revolution, technological determinism and the progressive direction of history while all its insights into the political economy, alienation and the power of capital were being disregarded.” It would, however, be true to say that, overall, this is not Glasman at his best. Far from it, the book is, at times, even slightly dull, insofar as the avuncular Glasman endlessly recycles, in mantra-like fashion, the same ideas and phrases.

What is chiefly new here is the language of a covenant. Criticizing, on the one hand, state planning for its failure to communicate what people want and its proclivity to inhibit innovation, and contract, on the other, as “an isolated event, an exchange of equivalents between two hands that by definition is indifferent to external consequences, long-term trends or context,” Glasman claims that what is required is “a form of political economy that can domesticate the destructive tendencies of capitalism by moving” toward “an intergenerational commitment to the common good between classes and regions based on the renewal of place.” To readers or listeners of Glasman, this may sound familiar. For the rest, though, it is even older wine in new bottles.

For example, Glasman invokes Germany, with its “vocational economy in which self-organized institutions preserve and renew the traditions of a particular craft and regulate labor market entry,” as a model to follow. Its regional banks constrained to lend within their region are salutary, we are told again here, as is the significant representation of the workforce in the corporate governance of firms and its co-determination of pensions by labor and capital. It is a system which was originally designed for Germany by Ernest Bevin, Labour’s Foreign Minister in the post-war Labour government. The tragedy is that it was adopted by Germany alone, Labour choosing nationalization, centralization, and collectivism at home over codetermination, federalism, and solidarity.

What Glasman does in Blue Labour is expand upon points made elsewhere over the past 14 years in essays, articles in the media, and talks given to a range of civil society groups and institutions. Thus, we hear that democratic renewal must involve community organizing, and what community organizing involves is an accumulation of “relational power,” the power working people have to “associate and work together in building organizations that can represent their interests on matters of mutual concern.” We hear, likewise, that the House of Lords, “as a chamber which amends and advises, should represent vocational democracy, where people are elected from their working lives.” And we hear that there should be a redistribution of power, simultaneously, to the smallest unit of self-government: in the case of Britain, the county and the parish.

Now, Glasman presents a caricature of liberalism (“a theory that views the individual as formed outside of relationships”), which means the affinities between J. S. Mill’s eco-friendly, decentralized market socialism and Glasman’s own vision of “social democracy” are overlooked. The genealogy of Blue Labour is restricted, primarily, to Aristotle and Karl Polanyi. Similarly, Glasman discusses the “working class” in the singular rather than the plural, ignoring the nuanced distinctions which exist between those who sell their labor power for a living. Yet these shortcomings do not mean that Labour, to anthropomorphize a second time, should not listen to its uncle. Certainly, if it wishes to make itself electable again, it should.

More importantly, Glasman’s program would make the world livable once more, after 40 years of globalization and economic polarization, with the Mercurians getting richer at the Apollonians’ expense. “Workers of the world unite,” Glasman pronounces at the book’s finale, “you have nothing to lose but your supply chains!” High in charm but low in wit, it is a conclusion befitting our beleaguered relative, out of favor but invited still to family events. But here, as elsewhere, Glasman is correct. This is almost invariably the case. Nevertheless, no prophet, as we know, is accepted as such in their own family; Glasman is no exception. Going by Labour Party Leader Keir Starmer’s reluctance to support striking workers, that is not likely to change any time soon, either. Labour, in other words, will remain a mommy’s boy.

Seamus Flaherty is a historian of ideas and the author of Marx, Engels and Modern British Socialism. He contributes book reviews to a variety of other publications, including Quillette, The Critic, and The New Criterion.