George Psalmanazar and the Extreme Art of Imposture 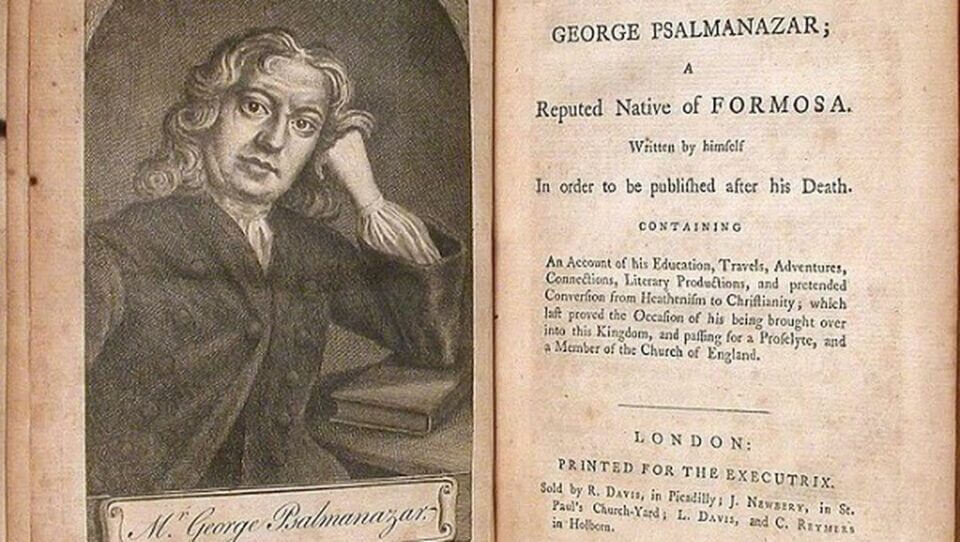 “Many of us also like impostors because, deep down, we understand that to exist only matter-of-factly, without fiction, would be intolerable.”

In 1703, London fell victim to one of history’s most astonishing hoaxes. A blonde-haired and blue-eyed Frenchman arrived in the city and quickly achieved fame as the first ever person from Formosa (now Taiwan) to reach Europe. It all began, he claimed, with Jesuits kidnapping him from his native isle. After a few adventures through Europe, he was rescued from the clutches of devious Catholics by a Scottish priest, who subsequently converted him to Anglicanism, christened him George Psalamanazar, and brought him to London.

Psalmanazar became a celebrity. He would attend dinner parties and “eat all sorts of unforbidden flesh raw,” which he said was Formosan custom. According to his 1704 book An Historical and Geographical Description of Formosa, his people even ate human flesh, particularly that of criminals and enemies. The secondary trade of an executioner was as a butcher of human meat. Psalmanazar described a crucified 19-year-old virgin girl whose “tender, delicate and delicious flesh” made her executioner very rich. Indeed, by Psalmanazar’s account, executioners must have belonged to one of the most thriving professions when, every year, 18,000 boys under the age of nine were sacrificed to the gods.

One would think that any sensible person would find these claims highly suspect, yet many wanted to believe Psalmanazar’s story. It satisfied British prejudices: He was a hero from a faraway land who had resisted enemy Catholic forces and joined the Anglican church. As the great Victorian adventurer and memoirist Harry Flashman (who committed rather a few hoaxes himself) once observed, “In England, you can’t be hero and bad. There’s practically a law against it.” (Emphasis original)

Those who did express skepticism soon found that Psalmanazar was expert at defending even the wildest aspects of his story. The obvious rebuttal to his claim that 18,000 boys were sacrificed annually was that this must reduce the male population to an impossibly low number. But Psalmanazar, as usual, had a clever answer. He explained that while the law said 18,000 boys must be sacrificed, it was also illegal, on pain of death, to inquire into the subject. Many parents quietly bribed high priests to spare their sons, as Psalmanzar’s father had indeed done. Psalmanazar concluded that the true number was likely far lower than 18,000. Put that way, it is all strangely believable.

In doing so, he helped to demonstrate how the more complex and esoteric an argument is, the easier it is for an intelligent person to accept, regardless of whether it is palpable nonsense.

Psalmanazar was invited to the Royal Society multiple times. Surely, one would think, a group consisting of some of Europe’s greatest scientific minds would have little difficulty disproving his claims? Yet Psalmanazar consistently outwitted them. Born in France, he neither looked nor sounded like someone from East Asia. He had no problem explaining this, however: His fair skin and blonde hair were, he said, the result of upper-class Formosans living in underground apartments. Many members of the Royal Society were suspicious and tried to catch him by asking complicated questions about language or astronomy, but Psalmanazar was even more skillful in answering these. In doing so, he helped to demonstrate how the more complex and esoteric an argument is, the easier it is for an intelligent person to accept, regardless of whether it is palpable nonsense. Even when, a couple of years later in 1705, the Royal Society finally received reliable and conclusive eye-witness evidence that contradicted Psalamanazar’s story, its members still refrained, for some reason, from publicly denouncing him. It took several years for Psalmanazar’s story to unravel completely.

In the past several years, there have been impostors superficially similar to Psalmanazar, especially in the United States: white people who, for a time at least, successfully pass themselves off as members of another race. However, unlike Psalmanazar, these impostors seemed genuinely to believe that, owing to some kind of ideological witchcraft, they were not the race they were born as. They exemplify the trend toward imposture becoming an extremely serious affair: Self-invention and reinvention are now creeds, and exociticism is a virtue. The pleasure of lying (and of convincing others of a lie) has been repackaged as “self-discovery” or “becoming my true authentic self.” Psalmanazar, on the other hand, just enjoyed his imposture as an ambitious hoax.

These modern fakes are perhaps like unromantic Don Quixotes: They entertain so many ideas and dreams about an identity that they try, with complete seriousness, to become that identity. Or maybe they are more like Hamlet, or at least how I read Hamlet, who in his attempt to fake madness became mad.

The most significant impostures of our time seem to fall into three categories: delusion and ideological fancy as above, point-proving (the Grievance Studies Hoax, for example), or malicious attention-seeking (Carl Beech or Jussie Smollett). None are undertaken just for fun. Would any public figures today even contemplate, for example, something like the 1910 grand hoax pulled off by the aristocratic prankster Horace de Vere Cole, in collaboration with members of the Bloomsbury Group (including Virginia Woolf)? Dressed up in blackface, turbans, fake beards, and ornate apparel, they convinced the Royal Navy that they were Abysinnian royalty. They were subsequently given an official tour of HMS Dreadnought. While being shown the battleship, the Abysinnian impostors spoke in gibberish and, whenever they saw something of interest, exclaimed “bunga bunga!”

The more old-fashioned kind of impostor—the colorful, self-aware fraud—is something we, English, particularly enjoy. It has been said that the English can forgive a great deal of fakeness if a person is interesting (while we seldom forgive a good man for being dull). Although we often say we are fed up with the fakeness of politicians, most of us are only truly, viscerally fed up when their fakeness is boring. I continue to suspect that even his most vigorous critics secretly enjoyed having a showy, incorrigible bounder like Alexander “Boris” de Pfeffel Johnson as an enemy. One has to marvel, mouth open and with perverse admiration, at the success of his careerism. Indeed, his great victory in the 2019 general election may be explained by the fact that his colorful fakeness was eminently preferable to the dreary, serious fakeness of everyone else.

Sir Walter Scott in his Journal, one of wisest autobiographies ever written, wrote that “Life could not be endured were it seen in reality.”

I suspect many thought Psalmanazar was a fake but enjoyed the fakery too much to puncture it. It is like an extreme form of acting—comparable to extreme sport or acrobatics. A skillful impostor can impress us like someone walking a tightrope without a safety net. We seldom approve, and we do not like to encourage it, but we are gripped by it. And we wait and wait, with horrid unexpressed eagerness, for the person to fall. This is surely why television shows about double lives and fake identities, from The Americans to Better Call Saul to Dexter, have been so popular. To some extent, we see our own coats of lies and half-truths, stitched together over a lifetime of dishonest self-importance, dramatically represented in these characters. As we watch their lies unravel, part of us thinks, gaily, there but for the grace of God go I.

Many of us also like impostors because, deep down, we understand that to exist only matter-of-factly, without fiction, would be intolerable. Sir Walter Scott in his Journal, one of wisest autobiographies ever written, wrote that “Life could not be endured were it seen in reality.” People with no feeling of the romance of the world are among the people I least trust. Possibly their plainness ought to be interpreted as honesty, but I fail to see it—quite the opposite, in fact. I have sometimes reflected that Jesus’ desire not to reveal himself publicly until a later date has a jolly, even playful quality that makes him, paradoxically, more trustworthy and believable. This humble hoaxery distinguishes him, as far as I know, from any other god-figure.

Psalmanazar himself became so compelled by the Christian story that, according to Boswell, even Samuel Johnson “reverenced [him] for his piety.” This piety explains one of the most curious things about Psalmanazar, which is not his fakery but, rather, his repentance. His life as a Formosan fell apart without event, and he faded into obscurity. The story of the first Formosan in Europe became, at best, a joke half-remembered. Eventually, he repented privately, with humility and a due sense of shame. Psalmanazar’s memoir was published posthumously, and it was written with the kind of sincerity that often makes for dull prose. It is still an interesting book, but far from the rollicking picaresque adventure I, at least, had hoped for. When reading about reformed scoundrels, we like to have a liberal mention of their vices, for virtue is seldom exciting, outside martyrs and knights and great heroes. Psalmanazar was none of these: His transformation was from an extraordinary man to ordinary man.

Still, Psalmanazar did not give up the hoax entirely. He remained until his death George Psalmanazar; we never have found out his real name.

Matthew Wardour is a writer in England.