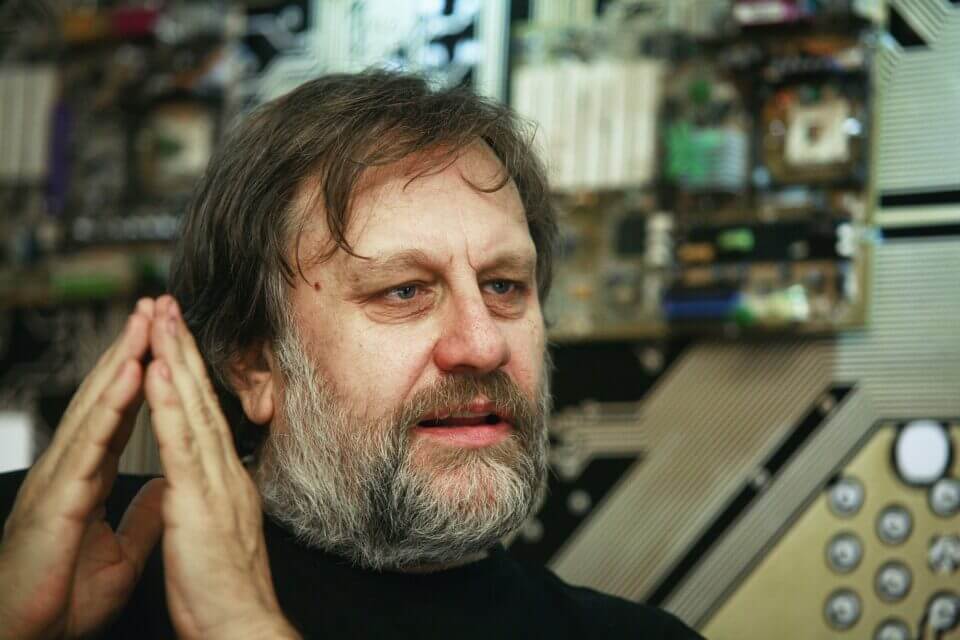 “Combining inanity with compelling anecdote, idiocy with sensible instruction, Žižek addresses himself to the ‘mess we’re in.'”

Slavoj Žižek’s new book Surplus-Enjoyment is subtitled, A Guide for the Non-Perplexed. It is, presumably, a small audience at which it is aimed, since Žižek’s new offering is nothing if not perplexing. On the first three pages alone, Žižek is logically inconsistent. He jumps from one thought to another, incoherently; he drops names, with little benefit to the argument; and he fails to furnish evidence for his claims.

Žižek, notoriously, is a Lacanian. For the uninitiated, the nomenclature of Lacanian psychoanalysis is inherently perplexing. And one suspects that the Slovenian philosopher hides all manner of elisions and mistakes behind the technical language he deploys in the name of the “Master.” What is most perplexing, however, is that Žižek has an audience at all.

“[A]nti-Semitism is a displaced-mystified form of anti-capitalism, the struggle against vaccination is also a displaced-mystified form of class struggle against those in power,” he writes on page two, pouring out shamelessly reductive analysis, while echoing Marx at his most anti-Semitic. Žižek begins as he means to go on: erratic, offensive, and facile. In short, the theoretical verve for which the philosopher is renowned is not, for the most part, apparent here.

What, then, if anything, redeems the Slovenian ironist and provocateur? Is Žižek merely a charlatan as others, spanning the political spectrum, from Left to Right—Noam Chomsky, John Gray, Roger Scruton, to name only the big beasts—have suggested? Or does Žižek merit perseverance?

Žižek, to be sure, is dreadfully puerile. An opportunity nominally to shock—to cite Stalin, to make a sexist remark, or to knock “PC” culture, which he conflates with wokeism—is never missed. Žižek, though, variously described as the “Elvis of cultural theory” and “Master of the counterintuitive observation,” is, it is true, not without insight. The reader is almost invariably condemned to wade through an excess of sentences and paragraphs, some of which make little sense, but the pith of what Žižek has to say is often interesting.

Combining inanity with compelling anecdote, idiocy with sensible instruction, Žižek addresses himself to the “mess we’re in.” We inhabit “a weird moment,” he notes, “where multiple catastrophes—pandemic, global warming, social tensions, the prospect of full digital control over our thinking…compete for primacy.” A “self-declared moderately conservative Communist,” the solutions Žižek formulates for the problems we face are sometimes well-conceived. In Surplus-Enjoyment, Žižek focuses on the environment, on ideology as “a material force which structures our actual life” and on our addiction to finding pleasure in our own oppression. Ultimately, however, the book is about whatever springs to Žižek’s mind. It is, in other words, a mess: a mess, namely, about a mess.

What is interesting is that, here, Žižek rejects the idea of progress. Instead of being on our side, he asserts, history “tends towards our collective suicide.” A reconstructed Marxist, highly attentive to psychology and unafraid to think independently, the true alternative today, he posits, is “neither ‘capitalism nor socialism’ nor ‘liberal democracy or Rightist populism’ but what kind of postcapitalism, corporate neo-feudalism or socialism.” Taking into account automation and platform capitalism, the privatization of the digital commons and the fact that a mere 2% of techno-utopian entrepreneur Elon Musk’s wealth could alone solve world hunger, Žižek might just be right. As for socialism, Žižek advocates rejecting “the continuity with what Left meant in the past two centuries.” Now this may be wise, but it is not conservative. Žižek attacks the notion of Fully Automated Luxury Communism (FALC). FALC, he correctly prognosticates, “will open up new unheard-of possibilities of control and regulation of our lives.” What Žižek proposes instead is market socialism, a vision of socialism based in part on Vladimir Lenin’s New Economic Policy and organic non-state socialized production. Unconcerned by Theodor Adorno and Max Horkheimer’s invocation of instrumental reason, Žižek looks to science to solve climate change, science unhooked from its traditional capitalist peg.

Still guilty of contradiction and wishful-thinking, this is a more mature Žižek than the “safe-space”basher we encounter elsewhere in the text. Nevertheless, Žižek still cannot countenance parliamentary democracy, describing himself, unflinchingly, as “a non-democratic Communist.” (Žižek, to be clear, favors direct democracy, as well as state coercion.) Likewise, Žižek advocates violence, or “ecological Leninism,” bringing the tone down from what sometimes otherwise approaches right thinking.

This, simply stated, is not a liberal Žižek. Moreover, a liberal Žižek would make more of Musk’s Neuralink and the techno-utopian assault on freedom of thought than the two pages Žižek turns over to the topic. Rather than calling for a right to “cognitive liberty” vouchsafed by the Universal Declaration of Human Rights to protect us in a world of impending brain transparency, Žižek reaches for Lacan’s enigmatic concept of the Big Other. For liberals, that is the new frontier. Freedom of thought, in the most literal sense, is under threat. Žižek acknowledges it, but, true to form, he does not develop his response to it. Žižek is not a charlatan. However, he is not a serious philosopher either.

Seamus Flaherty is a historian of ideas and the author of Marx, Engels and Modern British Socialism. He contributes book reviews to a variety of other publications, including Quillette, The Critic, and The New Criterion.