A Response to Cathy Young: Let’s Be More Dispassionate When Discussing Ukraine 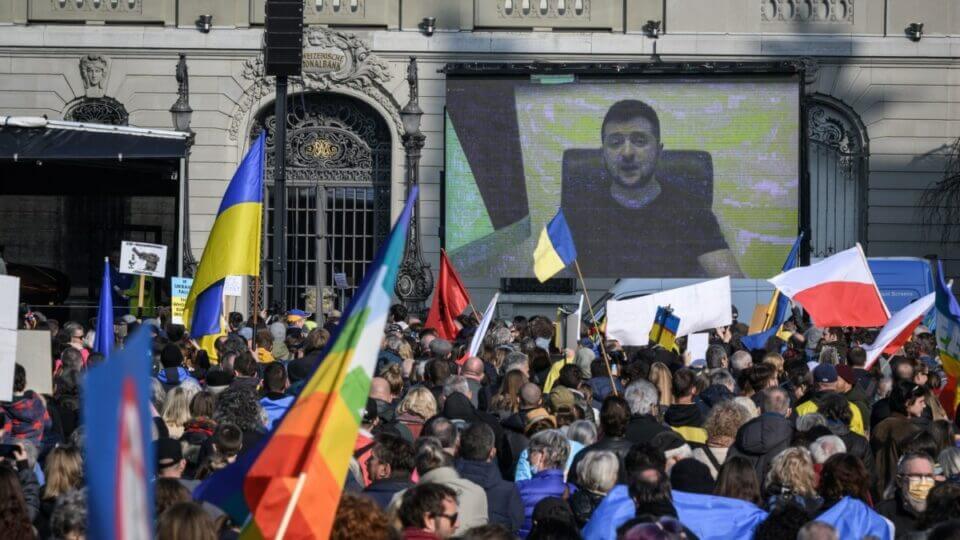 “Young knows all too well what a chilly climate for dissent can devolve into, regardless of good intentions. This can undermine the West’s moral high ground more than any Russia-backed stooge could.”

Few will doubt writer Cathy Young’s candor and writing credentials or her professed commitment to freedom. Given what she experienced growing up in the Soviet Union, which she has recently chronicled at The Bulwark, I cannot help but be sympathetic whenever she bemoans modern Russia’s slide into authoritarianism and now President Vladimir Putin’s deplorable invasion of Ukraine. Since the invasion began on February 24th, it has resulted in the deaths of thousands on each side, while millions of refugees seek sanctuary in European Union member states like Poland and elsewhere.

On March 12th, Young published an article at Quillette, titled “Ukraine and the Pro-Putin Right.” Her vivid writing is evident, as is her clear contempt for President Putin and everything he stands for. Yet to go after those on the Right who do not share her same, precise views by suggesting that they are working in the service of the Kremlin amounts to misplaced outrage. Worse still, it stifles the overall discourse, especially at a time when nuance and keeping a level head (as opposed to encouraging censorship and binary good-versus-evil brinkmanship) are much needed. And this is not the first time Young has suggested that certain right-of-center commentators and other anti-establishment conservatives are Putin sympathizers, even ignoring critiques by those she singles out.

In putting a spotlight on these alleged Western Putinists, Young lumps together a large swath of people on the Right. This broad brush covers supporters of former President Donald Trump, paleoconservatives, “national conservatives,” libertarians, Tucker Carlson, and others. In practice, this also obscures the wide variety of views expressed by such individuals—not unlike how anarchists and “tankies” are not representative of liberals or the Left in general. Now, there are, indeed, those like aging paleoconservative Pat Buchanan, who have expressed open admiration for the Russian autocrat despite otherwise opposing the invasion, arguing that he is a defender of traditional Christian values. Although Christopher Caldwell, the former Weekly Standard editor, has not gone as far, Caldwell has notably described President Putin as a latter-day Ataturk and a great traditional statesman, a characterization that would later be criticized by John Daniel Davidson at The Federalist. Yet many others who have either never supported President Putin or could not care less about his policies oppose further escalation all the same, such as Davidson, foreign policy analyst Richard Hanania, and journalist Lee Smith. To equate their opinions with pro-Kremlin propaganda is obviously incorrect.

This characterization makes it easier to handwave, if not outright dismiss, the points being raised by certain commentators who diverge from the consensus view of the war. There actually are legitimate concerns, for instance, that the United States Congress may be paying more attention to Ukraine than to the plight of everyday Americans, thus explaining why some consider bringing their own elites to task a greater priority than fighting Russia. That the West may, in fact, have contributed to the prelude to the invasion has been discussed over the years by figures from Oliver Stone to New York Times editor Anton Troianovski. And the risks that could accompany further North Atlantic Treaty Organization (NATO) expansion into the former Soviet sphere were acknowledged as long ago as 1997 by none other than then-Senator Joe Biden. All the while, it has become more and more difficult to brush aside how the situation on the ground is increasingly different from how it is being portrayed on social media due to both the presence of propaganda (on both sides) and the modern manifestation of the fog of war, which I discussed in my last Merion West essay. And this is to say nothing of how the push for sanctions and ostracism—not simply aimed at Russian oligarchs and politicians but also anything Russian—is not just fueling Russophobia but also driving even anti-Putin Russians to become hostile to the West.

None of this in any way justifies the invasion, of course, but they are not “whataboutisms,” conspiratorial ramblings, or delusions about Putinist Russia being a bastion of Christendom. Firebrands on the Right such as Jack Posobiec see no problem in sending aid to Ukrainian refugees through Catholic charities and expressing empathy for Russians caught in the crisis while also opposing actions like creating “no fly zones” that would almost certainly further escalate the war. Similarly, those like Tablet’s Noam Blum, who is otherwise wholly cheering on Ukraine and President Volodymyr Zelenskyy, finds no contradiction in both doing this and also being conscious of “the limits of what we can and can’t do for [Ukrainians] due to larger global implication.”

Young is aware of much of this, at least to some degree. Judging by her Bulwark piece, she understands both the cynical depths of Soviet oppression (having witnessed it herself growing up) and how President Putin undid the liberal promises that sprung forth after 1991, in a haunting echo of the Cold War. Although Young considers the Ukrainians alone as the true victims of the invasion, she nevertheless expresses some sadness regarding the plight of Russians left behind under a repressive regime, and even more for those openly standing up to it. Yet it cannot be ignored how her absolute disdain for President Putin (and whatever is perceived as associated with him) is overriding all other considerations.

A real danger lurking beneath this strand of discourse is in how it risks impoverishing the entire conversation surrounding the invasion of Ukraine. By not only dismissing legitimate inquiries over subjects like the biolab claims in Ukraine but also shooting down raising concerns as tantamount to being pro-Kremlin, it can give rise to an echo chamber wherein only particular points, which unquestioningly support Ukraine and loudly display contempt for President Putin, are acceptable to bring up. Already, as foreign policy analyst Chris Ehrlich notes, even trying to parse the truth from the fog of war and seeking an end to the conflict is enough—in certain circles—to be on the receiving end of accusations of being pro-Russian.

Further exacerbating this is how some in the media, including Keith Olbermann, and the likes of Senator Mitt Romney are openly trying to censor such voices (even from the Left) on allegations of their being pro-Putin. Not only are such calls cultivating Red Scare echoes of enemies in our midst, but by fostering further Russophobia, they also raise the specter of moral hysteria, not dissimilar from the kind suffered by German-Americans and Japanese-Americans during the world wars. Young knows all too well what a chilly climate for dissent can devolve into, regardless of good intentions. This can undermine the West’s moral high ground more than any Russia-backed stooge could.

All the while, little attention is being paid to the elements of the Right that have not fallen under similar scrutiny. John Podhoretz, for instance, recently pushed claims about neoconservatism’s seeming vindication as the answer to deterring tyranny, as though the “good old days” after the September 11th attacks never happened, while Francis Fukuyama forecasted President Putin’s defeat and Russia’s embrace of liberal democracy on similarly triumphalist notes. Yet those entertaining notions of regime change and the “end of history” do not seem to factor in the disillusionment many felt during the turbulent 1990s or the role played by the Siloviki—military elites of a similar mold to President Putin, whom veteran journalist John Helmer described as being the heirs of the old Stavka and displacing the increasingly fleeing Yeltsin-era oligarchs—and their grip over the country’s future, regardless of the war’s outcome. Even if nuclear war were off the table, one cannot help but wonder whether this segment of the Right’s professed righteousness and commitment to protecting liberty abroad are what they appear. Their cheerleading in Iraq and Afghanistan, as documented by Glenn Greenwald in 2013, and their current attempts to label dissenting voices on the Right and Left as “anti-American” are clear enough to see.

Inevitably, there are more questions to ask. What would take the place of sanctions? Are “no fly zones” really a viable option? How far are we willing to go to help Ukraine, or are we making the correct call with what we are doing now? Yet with a binary good-versus-evil framework being encouraged, as well as an accompanying sense of overconfidence—which may have contributed to foreign volunteers risking almost certain death to join the Ukrainian war effort—these could seem like almost trivial points to raise compared to focusing on a morally-gripping cause. At a time when clarity is hard to find and when pragmatic decision-making is needed to de-escalate tensions, encouraging discourse along these lines can be a very dangerous gamble. As such, every perspective, including those that we may disagree with, must be taken into account.

It is not difficult to sympathize with Young. In addition to rooting for the underdog or empathizing with the plight of a suffering people defying a great power, there is the allure of fighting for justice against a 21st-century madman. Reality, however, is rarely so clear-cut. Conviction can be as blinding as it is enlightening. Letting the former take hold, no matter how much one would want it to, will likely result in further hardship for Ukrainians and Russians alike, who will have to pick up the pieces while the world looks on. Instead, let us rediscover the importance of dispassionately wading through complicated events as we determine what we might be able to do to help bring this conflict to an end.

Carlos Miguel del Callar is a freelance writer in the Philippines.