The Power of Facing: A Review of “Christopher Hitchens” by Ben Burgis 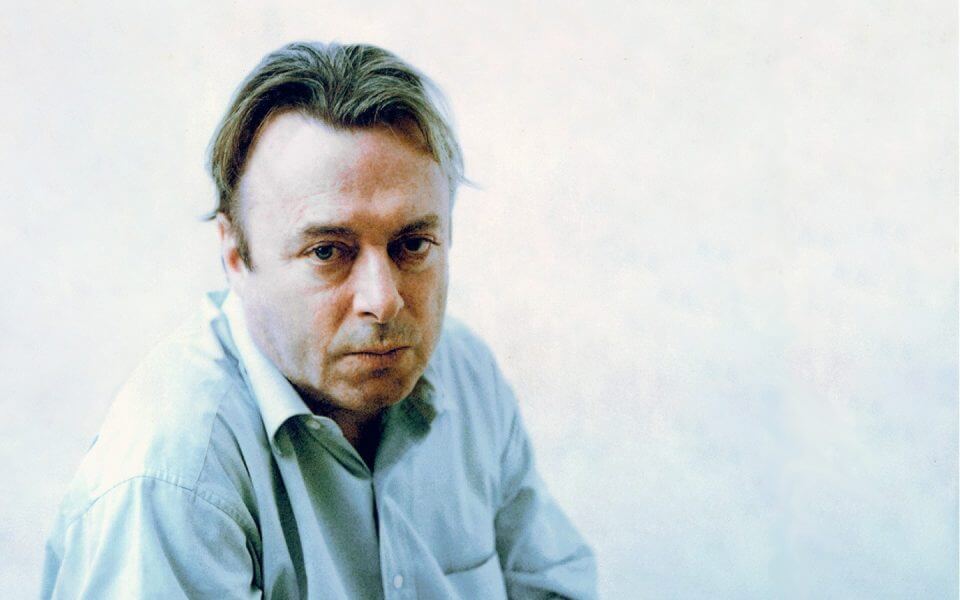 “One of the causes of tension with Noam Chomsky, for example, Burgis observes, was Hitchens’ recognition that the forces of anti-imperialism today are dissimilar to ‘Ho Chi Minh or the Sandinistas.'”

“Only the cultist or the academic,” Martin Amis says redundantly, “is capable of swallowing an author whole.” When we say we love a writer, we tend to refer to just about 50% of his work. This roughly is Ben Burgis’ view of Christopher Hitchens: the caustic journalist who—having (for example) at Oxford slept with two, future members of Baroness Thatcher’s government and later been publicly spanked by the would-be premier herself—compares to today’s hacks as industrial disinfectant does to spiked fruit punch. The book is the first to mark the tenth anniversary of the old boy’s death (appraisals by Matt Johnson and Daniel J. Sharp will follow soon), and only the third of its kind in Hitch literature, since the grasping and the oily—Richard Seymour and Larry Taunton—have already had their go.

One suspects that what Amis has in mind when he thinks of worthwhile writing is something like an inimitable idea or execution, perhaps like Vladimir Nabokov’s Invitation to a Beheading. (Otherwise how can one miss, say, the unfailing pen of Saul Bellow—each sentence worth its ink—even when an entire novel such as More Die of Heartbreak is forgettable?) Hitchens would have encouraged us to be radical in distilling his own contribution. The Nabokovian or Bellovian talent for prose aside, the twopence he adds to our intellectual treasury shines in a single footnote at the end of his memoir, Hitch-22:

“The synthesis for which one aimed was the Orwellian one of evolving a consistent and integral anti-totalitarianism.”

Mind the proper adjective. Hitchens published the long-form essay Why Orwell Matters a year and a week after the barbarities of September 11th: too soon after the event for it to have been the booklet’s moment of conception, or for Islamic fascism to have been its raison d’être. To note this as the day his thought shifted rightwards—right enough for him to have to deny a rumor that he wrote speeches for President George W. Bush—is an error both in timing and direction. Hitchens was a complex literary and cultural (and sexual) animal, but, politically, he was monocellular: a straightforward anti-authoritarian. Any partisan sidestepping he performed was secondary, contingent on a fervid allegiance to those assorted notions that since the Enlightenment we have come to assume to be the rights of man.

On to the nasty business of foreign policy: Hitchens cannot be said to have ever been fundamentally anti-war. To the degree interpersonal habits reflect the political, he was gleefully bellicose—drawn to “the smell of cordite,” as Amis puts it. Ian Parker  recalls that, at times, Hitchens can look “like a brain trying to pass as a muscle,” and “as twitchingly alert as Trotsky at the head of the Red Army.” Without this admission—and sometimes even with it, as Parker demonstrates—one deduces wrongly that the anti-Vietnam war Hitchens and the pro-Iraq war Hitchens are distinct personalities. At least Burgis registers Hitchens’ animus toward Saddam Hussein, evident as early as in the 1999 pamphlet No One Left to Lie to, if not his relief at the (delayed) decimation of Serbian genocidaires by American F-16s that same year and his belief that, for the lead on the international stage, inaction is in itself a form of action.

For once, to have a theocrat or a bandit ejected from, rather than inserted into, the position of head of state in a wobbling foreign domain by western imperium—such as in Iraq in 2003 instead of 1968—is precisely the sort of thing that would have elated the young Hitch: the same one who in 1989 wrote derisively of Secretary of State Henry Kissinger’s cynical decision to do nothing (and to persuade Britain to do the same) to halt the 1974 coup in Cyprus and the subsequent Turkish invasion and partition of the island. He reliably wore an internationalist and humanitarian naïvete on his inversely rolled sleeve, matching the lapel pin of the flag of aspiring Kurdistan.

Did you notice Parker’s mention of that crucial name? Hitchens repelled or was resistant to most associations but never, to my knowledge, that of Trotskyite. He, as the left-wing party with whom he would picket while at Oxford, took on the label to signal affinity not for the chairman of the Revolutionary Military Council which summarily executed rebellious sailors at Kronstadt, but for the Russian Communist Party’s chief dissident, whose quarreling the dominant faction eventually deemed to be unpardonable—as Raymond Williams describes the reception of Orwell’s 1984 and Animal Farm by the official left: “the ultimate sin of ‘giving ammunition to the enemy.’” Burgis laments that by 2002 Hitchens had abandoned the prospect of an international socialist movement, the cause which he had ardently nurtured in the 1970s. But even if refusing to live in the past is lamentable, Hitchens can hardly be accused of neglect. “Laugh all you like,” he cues, reminiscing, just three years before his death. “You didn’t see the workers in that French plant in 1968, rearranging the big letters of the factory owner’s name (Berliet) so that the sign over the gate now read LIBERTE.” Yes, in retrospect, he thinks that year marked the end rather than the beginning of a global movement of solidarity, but I put to you that the following sounds not like a devolution of one’s views but rather a refinement:

“The antitotalitarian ethos embraced by the best soixante-huitards [sixty-eighters] remains an option, and I believe that it will have further opportunities to declare itself—in Cuba, to take one vivid and imminent example—long after the pseudo-revolutionary silliness has been forgotten.”

If we insist on identifying his politics by a patronymic (or a matronymic, in this case), Hitchens should more accurately be called a Luxemburgist. The Polish-German radical was endlessly suspicious of creeping bureaucracy and illiberalism, even in October 1917, insisting that a socialist revolution must be guided by the spontaneity of the masses rather than the design of an elite within the working class. Hitchens has in more than one way and on several occasions rephrased her precept: “Freedom is always and exclusively freedom for the one who thinks differently.” He writes of a sojourn in Cuba in the summer of 1968 (made by the university-aged Hitch, for whom Burgis is nostalgic) with some disquiet. Having to surrender his passport upon arrival? Very well. Admonished for wandering away from the coffee plantation where he volunteered? Fine. But what rattled his sub-tropical cage was being told not to speak a certain way:

“I heard the distinguished Cuban film director Santiago Álvarez say that any form of criticism was allowed in Cuba, except direct criticism of Fidel Castro. This seemed a rather large exception, but when I tried to be funny about it (so often a mistake in revolutionary circles), I had my first experience of being denounced, in unsmiling tones, for ‘counterrevolutionary’ tendencies.”

While red-flag socialism matured and withered around Hitchens, he never acquired the conservative germ—the instinct that the passage of time alone might confer value upon institutions (he would have dispensed with Buckingham as soon as with the Vatican, though without turning down dinner invitations at either)—and still registered a youthful revolutionary fever. Could he have been so naïve, Burgis asks, as to think that his 2001 book, The Trial of Henry Kissinger, could lead to a real trial? Well, after Hitchens published his case Kissinger was sought for questioning by magistrates in France, Argentina, and notably Chile in relation to various killings and disappearances. Hitchens himself threatened to sue him for slander after the old viper, presumably feeling threatened, bit back. Hitchens never ceased being a pamphleteer first, and followed his diatribe against William Jefferson Clinton in 1999 by submitting an affidavit effectively accusing one of his own friends, Sidney Blumenthal, senior White House aide, for perjury during the President’s Senate impeachment trial.

Martin Amis  turns, unsurprisingly, to Nabokov for an intellectual sliding scale. “I think like a genius, I write like a distinguished author, and I speak like a child,” admitted the bilingual novelist, which Amis applies to Hitchens in reverse. His friend, Amis knows, thought with the intuition of a precocious boy but spoke like a genius. This is why the midsection of Burgis’ work—commentary on nine debates in which Hitchens participated over about two decades—can be soporific. Reading about Hitchens in speech simply does not approach the real thing, and only about three debates of Burgis’ selection are directly relevant to tracing a purported transformation in Hitchens’ thought.

The volume could have been condensed to the penultimate and most valuable and interesting chapter, where Burgis peeks at the consistency rather than the dissonance between Hitchens’ earlier and later views. He stops no more than half a step away from what the premises entail: that Hitchens did not change as much as the world around him did. One of the causes of tension with Noam Chomsky, for example, Burgis observes, was Hitchens’ recognition that the forces of anti-imperialism today are dissimilar to “Ho Chi Minh or the Sandinistas.” Two months before his death, Hitchens wrote of the “ongoing polemic” between the anti-imperialist and anti-totalitarian left and his inclination toward the latter: his unwillingness to cede revolutionary credentials to, for instance, Hamas or Hezbollah. To put it briefly, since the turn of the millennium, budding insurgents—not aged states—have been the most fiercely reactionary elements in world politics. (Another of the many footnoted or parenthetical gems in Hitch-22: to call backward Islamic terrorists “radical” is plainly to abuse the English language.)

It is the erudition and sincerity of that chapter that Burgis finally disappoints by the facile suggestion that late Hitchens might be described as a neoconservative (except for Palestine, torture, and surveillance—incidentally, how many caveats can a term withstand before caving in?) Hitchens’ foreign policy was neither neo nor conservative; to use Walter Russell Mead’s taxonomy, he belonged mostly to the Wilsonian school of thought. Neoconservatism was a reaction to the New Leftists’ low tolerance for carpet bombing Vietnam, mainly, as well as their high tolerance for cannabis, and Burgis knows this. But Hitchens was the New Left before Paris 1968 and until, if not even after, Portugal 1974—Burgis knows this, too. So how can he not know that Hitchens’ disdain for realpolitik (often manifesting in neutrality) was already in print since 1984 at the latest? Had he after 2001 developed a reflex against foreign intervention as such, then we would be pressed to enquire about “what the hell happened.” Besides, the most charitable version of this question already has an answer in Hitchens’ memoir, one that Burgis excerpts. If “the power of facing unpleasant facts” is what Hitchens most admired about Orwell, we now have two instances to emulate:

“I didn’t so much repudiate a former loyalty, like some attention-grabbing defector, as feel it falling away from me. On some days, this is like the phantom pain of a missing limb. On others, it’s more like the sensation of having taken off a needlessly heavy overcoat.”.