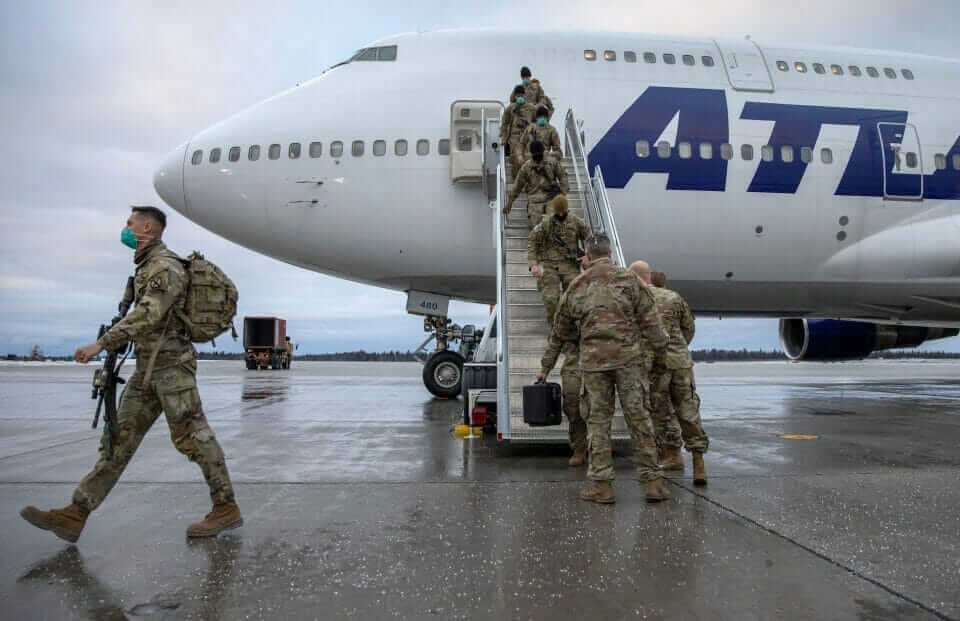 “Dear doves and hawks and other feathered brethren: It is already over.”

“Tomorrow has broken out today:

Riot in Algeria, in Cyprus, in Alabama;

Aged in wrong, the empires are declining,

Nobody has any appetite left for hawkish pomp and humanitarian mumble, but we shall have our fill of both by the end of the year. Should the American mission in Afghanistan be called off? The question assumes there exists an alternative. No, we are not in a position to wonder because withdrawal has not been a choice for quite some time: It is an inevitability, and the little the Biden administration can and should do is to expedite it. The rush to claim credit for ending an endless war, to disown debit for the civil war that follows—and to blame partisan opponents for attempting to do either—has already begun. Reject the premises altogether and watch, calmly, as Lady Liberty Enlightening the World waves goodbye to all that.

The language of “endless” or “forever” war fails twice. (Terms from science-fiction should generally stay there.) First, war implies force of the degree and duration necessary to subdue the enemy: The United States has committed to neither in Afghanistan since 2003. Second, setting it apart from other forms of collective violence, war envelops the entire political community: its leadership, the instruments of state, and the general population. The American citizenry has been retired from this venture since at least 2011. Calling the thing in Afghanistan what it is—or, rather, not calling it what it is not—can evacuate from the debate unnecessary reflections on defeat and push us to wrap up this business. Withdrawal should be uncontroversial, a merely logistical matter.

The possibility of permanent violence is intrinsic to war. A state’s effort to induce capitulation requires imposing on the opponent conditions worse than capitulation, and not to allow this imposition to be or appear temporary. The context of war—setting, arms, tactics, norms—is fluid, but its nature is not. In the fourth century B.C. in central Greece, the purpose of the long campaign and even longer spears (a technological edge) of Macedon was the subjection of Athens and her allies. For most of them, the readiness to deliver death, and perhaps a quick demonstration of that, sufficed. Philip II obliterated those for whom no conditions were perceived to be worse than submission, like the elite Sacred Band of Thebes. The fate of each belligerent is a product of what Carl von Clausewitz calls the “sum of available means” and “strength of the Will.” The United States has never been deficient in the first department but, absent the will to escalate the violence until the enemy’s compliance or annihilation, war can neither be won nor lost: It is nonviable.

The keffiyehed man in an old portrait at the family house in rural Lebanon has always been introduced to me as a great-grandfather called Iskandar: a name used with slight variations in the Middle East and Central Asia (and, I bet, more commonly in your hometown). Alexander III, Philip II’s son, put down Arachosia and Bactria—the regions now called Afghanistan—in three years. How long does one suppose it might have taken Bush II? Well, he did not seek to find out. Escorting the Taliban out of government took less than three months, during which the flame of war—“sustained, comprehensive, and relentless,” per the commander—burned brightest. But perhaps not even then (while within the Pentagon’s means) was carrying the act to its ultimate end politically acceptable. Hardly an ember remained by 2009. The decision had long been made: The mission was “to generate the conditions needed to train Afghan Security Forces and give them the space to take over” and observe sham elections hoping they produced a kleptocracy that is at least competent. Conventional American forces have not fought a battle on Afghan land since 2014.

War activates every stratum of society. At most and at once, there have been 98,000 American troops stationed in the Graveyard of Empires, during President Barack Obama’s first term. More Americans serve, in total, in Japan, South Korea, and Germany. The last 2,500 in Afghanistan today constitute close to a thousandth of total United States military personnel, which is in turn less than a hundredth of this country’s population. Besides these few and their families who are directly involved (and those in the public and private industries that support them), more citizens have recently been concerned with Kiev than with Kabul or Kandahar. Can the nation be at war if one in five Americans does not think so and another is not quite sure? Dear doves and hawks and other feathered brethren: It is already over.

If the foreign-policy objective—not merely fervent wish—had been to prevent Afghanistan from ever again serving as an operational base for Al-Qaeda, or to deracinate the Taliban, the United States should have been willing to go as far as permanently garrisoning or annexing the whole or part of the country (establishing “mandate” or “overseas” territories, if one prefers euphemisms), and even salting the earth. Instead, she labored to deliver an infant state that might resist the Taliban. Put otherwise: not to fight a war, but to convince and prepare another to fight it. Two Middle Eastern cases, their names now exhaled by peacemakers in the same sigh as New Bactria, are just as clear. The war against the Iraqi army of sand ended less than three weeks after the 2003 invasion—when most operations should have ceased, too, and when we thought we were in a post-war period—and the one in Syria these States never joined. (The latter, geographically speaking, took Alexander one day of blood and iron which had a Persian emperor flee and leave his own family behind.)

War can refer to what the United States has been doing in Central Asia only superficially, in that bullets are leaving barrels, and some of those firing them are in uniform. In that sense, the word also applies to our own great, irate District. Phrases in the proximity of offering technical, aerial, and special-operations support to a young republic trying to suppress an old insurgency, or dabbling in foreign nation-building, may sound unintelligible (or too harsh) but at least approach the mark. The integrity of the English language is in itself war-worthy, but all this has more than semantic import. The abstraction of a global war on borderless terrorism has fostered the illusion that we are indeed fighting and the delusion that we stand to lose, with all the consequences of life and reputation that entails. By realizing we are not at war, we might have extracted ourselves from Afghanistan much sooner—let us avoid further delay.

This short word has a long history; we have been too generous with its deployment, and poor usage is rarely accidental. President Ronald Reagan first gave currency to the gem “war on terrorism” which, you must admit, has a certain ring to it, even though Terror is not an opponent whom one can ooh-rah into submission (neither are Poverty, Drugs, or a Coronavirus for that matter). As W.H. Auden might have put it: For rhetoric, the device was too clever. It lets the user kindle the fervor rightly evoked by the roar of those three letters so arranged, but it also implies popular furor constant and consistent with the political logic that guides warcraft. (Clumsy wording can also spoil the Hobbesian concept of perpetual war, the natural state of statelessness—bellum omnium contra omnes—where each individual’s violent desire for, and claim to, all things in the world is equal and equivalent and overlapping. Afghanistan was closer to this sort of idyll before 2001 than since.)

If the nation is in drab, her citizens should be, too; one would expect the conditions of their shared life to be so influenced that they daily call forth martial virtues, like courage and solidarity, self-sacrifice, and tenacity, even in those far from the battlefield. The tone and volume of domestic production, commerce, and social convention should adjust to the din of the fight. (In the adversary’s case: what popular passions Afghan nationalism could have inspired have been channelled through the Taliban instead of the new army and police forces.) If the nation is not at war and the community is largely unaffected, then whatever military operations are underway must be of a different sort: There can be good reason to offer peacekeeping or training or aid or intelligence but, when faced with a warring foe in such circumstances, we should know that withdrawal is imminent. Victory is unavailable to non-combatants.

We can foresee some of what follows. An Afghan civil war, possibly; factional and tribal clashes for relative power punctuated by expressions of a need for “dialogue,” certainly. The re-subjection of women and girls who have just managed some education or some self-sufficiency or autonomy over their reproductive habits. Increased emigration, much of it westwards. But one symptom we can and must suppress. To haul any shame for all this, for an American citizen, is to assume too active a part in its evolution. American involvement has always been tertiary to that of the Taliban and the Islamic Republic. W.D. Snodgrass, the poet for our generation, could have just as easily written the verse in the epigraph today, slightly varying the proper nouns but similarly vexed, conflating events relevant and not to Pax Americana. We, instead, should pick our battles. Keep your eye on Alabama, perhaps, and on whatever is gathering in the eastern distance.