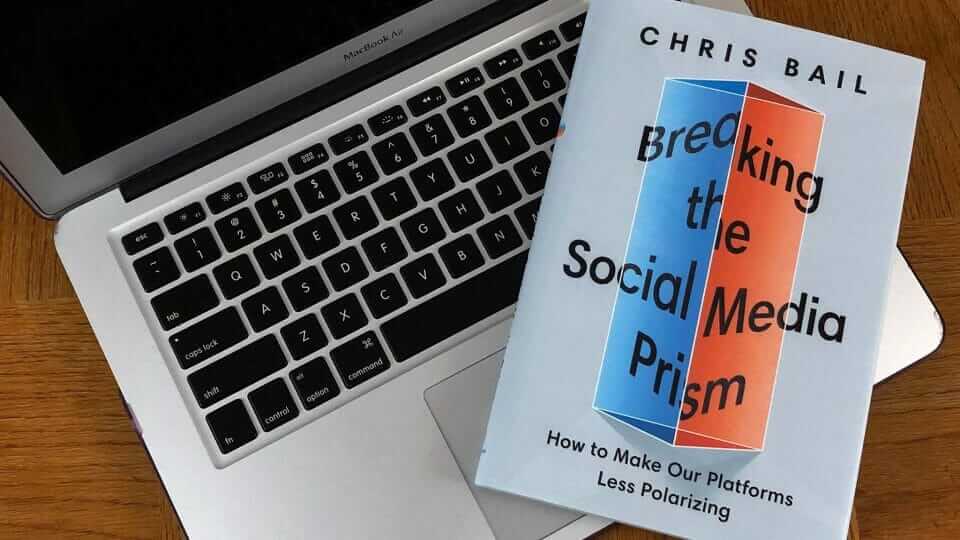 “To explain why the echo chamber corrective flopped, Bail puts forth an alternative theory of how today’s social media is helping drive polarization and mutual contempt between partisans.”

How can self-government long persist if many of us are conducting the bulk of our political discussions on platforms where we are not acting like our true selves, and where social reality is refracted rather than accurately reflected?

For those of us concerned about the strength of American democracy (and our ability to meet the challenges of self-government in particular), this is the key takeaway question from Chris Bail’s wonderful new book, Breaking the Social Media Prism: How to Make Our Platforms Less Polarizing. Bail is a data science professor and director of the Polarization Lab at Duke University. And, in Breaking the Social Media Prism, he draws extensively on his research with the Polarization Lab to argue that “the rapidly growing gap between social media and real life is one of the most powerful sources of political polarization in our era.” Bail is not a cock-eyed optimist; he understands that America really is home to deep, fundamental divisions and conflicting worldviews. However, he leverages troves of data and carefully parses his team’s experiments to argue that social media—in its current form—is exacerbating our political polarization. We are polarized to begin with, but social media is making it worse.

But it is not doing so in the way we tend to think it is. Bail pushes back against the conventional wisdom that the problem with social media is that it creates “echo chambers” and, thus, extremism. When thinking through the worrisome connection between social media and polarization, many assume that people online are solely exposed to viewpoints with which they already agree, and à la Cass Sunstein’s “law of group polarization,” the more that users are exposed solely to their own side’s narratives or opinions, the more extreme and committed to their particular side of the spectrum they grow. If this were the case, then we might assume that the corrective would be enhancing partisans’ exposure to the arguments of the other side. Bail and his colleagues at the Polarization Lab tested this hypothesis. It turns out that it is incorrect.

Bail and his team had study participants follow Twitter bots that were designed to retweet messages from the opposite side of the political spectrum; a Republican participant would thus be exposed to more Democratic-leaning tweets via this bot, and vice-versa. Rather than inducing moderation, this treatment often left participants more extreme on a wide array of measures. Bail writes: “Exposing people to views of the other side did not make participants more moderate. If anything, it reinforced their preexisting views.” Rather than engaging with the other side’s views, writes Bail, study participants tended to “experience stepping outside their echo chamber as an attack upon their identity.” This served to enhance in-group loyalty and out-group animosity. Thus, “stepping outside their echo chambers seemed to sharpen the contrast between ‘us’ and ‘them.’”

To explain why the echo chamber corrective flopped, Bail puts forth an alternative theory of how today’s social media is helping drive polarization and mutual contempt between partisans. Bail leans heavily on the late sociologist Charles Horton Cooley’s concept of the “looking-glass self.” As social creatures concerned with our reputation and status, “We constantly present different versions of ourselves, observe which ones elicit positive reactions from others, and proceed accordingly.” Social media serves this very human need particularly well: “Social media give us much more flexibility to present carefully curated versions of ourselves.” The problem with social media as it stands today, however, is that it incentivizes us to present politically extremist versions of ourselves. Soon enough, we are locked in an escalatory cycle, whereby both sides are presenting themselves as more extreme than they, in fact, are and thus inspire undue amounts of fear among the ranks of the opposing side. Bail concludes:

“The great tragedy of social media, which has critical implications for political polarization is that it makes our tendency to misread our social environment even worse. We use social media platforms as if they were a giant mirror that can help us understand our place within society. But they are more like prisms that bend and refract our social environment—distorting our sense of ourselves, and each other.”

Social media is not bringing reality online. It is reflecting a distorted picture of reality back to users. How? By amplifying extremists and muting moderates.

Bail’s studies indicate that “political extremists are pushed and pulled toward increasingly radical positions by the likes, new follows, and other types of engagement they receive for doing so—or because they fear retribution for showing any sympathy toward the mainstream.” Thus, social media “normalizes extremism” and distorts users’ views of the radicalism of the other side: The Left sees the Right as more right than it actually is, and vice-versa. Therefore, the social media prism exacerbates “false polarization,” which is “the tendency for people to overestimate the amount of ideological differences between themselves and people from other political parties.” Meanwhile, moderates are muted. Bail found that political moderates tended to worry that posting on social media about politics could endanger familial relationships, friendships, or jobs. They consequently opted not to post political substance nearly as often as their more extremist counterparts.

In addition to muting moderates, amplifying extremism, and enhancing false polarization, social media offers an exceptional opportunity for citizens to be the worst possible versions of themselves. This becomes quite an issue when we conduct more and more of our public discourse online. Soon enough, our online, degraded selves become our political selves. Our system of self-government suffers as a result.

For example, Bail discusses the mismatch between the real life and the online life of one of his study participants, Ray. On social media, Ray posts lots of pictures of Democrats, especially non-white Democrats, alongside piles of excrement. But Ray in real life was quite distinct from his online self: “Though Ray’s online behavior was by far the most reprehensible of anyone in our study, he was one of the most polite and deferential people we interviewed.” In short, writes Bail, “Ray had created an entirely different world for himself online.”

This sort of disconnect distorts our politics, especially as politics nationalizes and more and more of public discourse occurs online. Ray the man is a polite, respectable, self-governing and governable citizen. Ray the social media user is not. And since so much of public discourse is being conducted on social media today—since what is trending on Twitter is often what is being discussed in the halls of Congress or on the campaign trail or on cable television—this disconnect between Ray the man and Ray the social media user becomes all the more troubling. Because at a certain point, for electoral political purposes, it is Ray the social media user who is important here. If Ray relegates his political self to his social media usage, then—for all political intents and purposes—Ray is not a respectable, polite, and reasonable man at all. He is a contempt-ridden, hate-filled man who would like to see his party treat the members of the other party like the pieces of human excrement he believes they are. Under such conditions, a healthy democratic politics becomes much more difficult to sustain. Politically speaking, the nasty, social media Ray is all that matters, while the political importance of the deferential, kind, real-life Ray withers.

Bail’s proposed solutions to the conundrums presented by the social media prism are multi-faceted, ranging from personal-level reforms (like taking stock of how much one’s online self reflects his actual self) to systemic ones (like creating a new social media platform, DiscussIt, where people of opposing parties can anonymously discuss issues one-on-one through a chat function). Moving political discussions online and away from the perverse incentives of Twitter and towards a more conversational, consensus-building-prone environment like DiscussIt is a fascinating idea. Whether that is enough to minimize the gap between our online selves and our real selves in the long run is an open question. Perhaps, though, another route would be to try to take our political selves offline. That is, if we push politics into less online-heavy environments, like by localizing more political power, the online refraction and distortion that Bail correctly laments becomes much less of an issue.

Either way, Bail has provided social scientists, concerned citizens, and policymakers with an invaluable piece of work for understanding how social media is exacerbating our political divisions, and how we might forge a better future both online and off.

Thomas Koenig is a recent Princeton University graduate who will be attending Harvard Law School in the fall of 2021. Follow him on Twitter @thomaskoenig98.