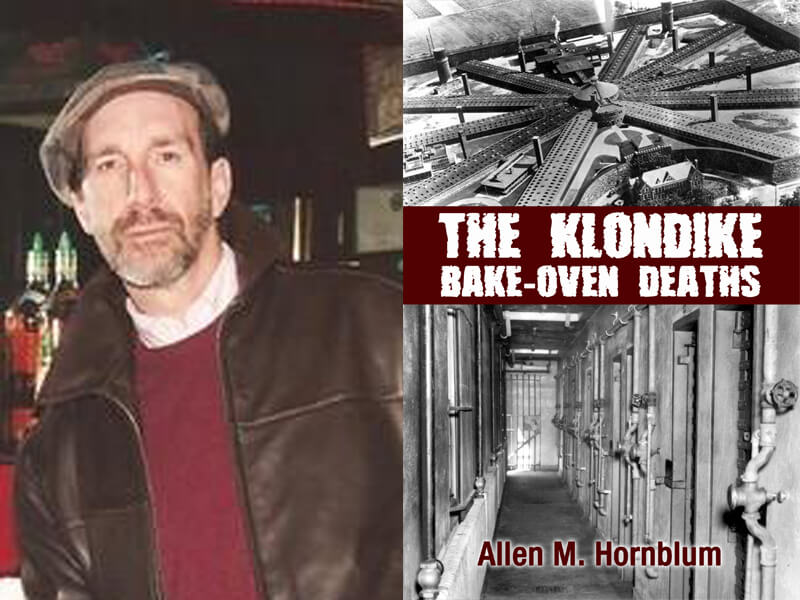 “In a novel to be released later this month, Hornblum—perhaps best known for his 1998 non-fiction book Acres of Skin, which centers on different events at Holmesburg Prison—retells the calamitous events of August, 1938.”

In August of 1938, inmates at Philadelphia’s Holmesburg Prison staged a  hunger strike in protest of the quality of the prison’s meals and the general conditions of the penitentiary. The guards sent 23 men to the “Klondike” (Holmesburg’s version of “the hole”). The Klondike, a small building housing only 12 cells, was frequently employed as an isolation unit to punish prisoners deemed disruptive. In this instance, the guards closed the windows, turned off the water, and cranked up the heat, causing the temperature to rise to about 200 degrees Fahrenheit. A few days later, the guards opened the door to find four bodies that had been baked to death, with many of the other inmates unconscious and close to the same fate.

The world took notice, and the deaths of these four men were covered in newspapers such as  The New York Times,  The Philadelphia Inquirer, and  Newsweek, the last of which gave the story three full pages. (Interestingly, also, this incident became the basis for the play Not About Nightingales, after a young Tennessee Williams, then just Thomas Williams, read news coverage of the events in Philadelphia.) Yet, though this was “described at the time [as] the worst case of prison abuse in American history,” according to author Allen Hornblum, the disastrous event from that hot August has slipped from our collective memory.

In a novel to be released later this month, Hornblum—perhaps best known for his 1998 non-fiction book Acres of Skin, which centers on different events at Holmesburg Prison—retells the calamitous events of August, 1938. (The events of the Klondike do make a brief appearance in Acres of Skin.) Branching out from his usual approach, however, Hornblum’s new novel, The Klondike Bake-Oven Deaths, though rooted in factual events, is a work of historical fiction. Unlike Hornblum’s previous books, many of which also focus on events in prisons (such as Sentenced to Science and Against Their Will), Hornblum here dabbles with pure storytelling. In an interview for this piece, he described to me how he decided to undertake the “intellectual challenge” that accompanied his taking “a try at writing fiction.” In his own words, “it could be called what Truman Capote labeled in 1965 ‘a true crime novel,’ when he wrote his classic book In Cold Blood.” With that said, he did acknowledge, though, that “it’s probably going to be perceived as non-fiction because I stick very closely to the actual events as they occurred in 1938.” Rather than centering foremost on the “bake-oven deaths” themselves or the events leading up to them, the novel primarily focuses on the legal and political turmoil that ensues as the county coroner, Heshel Glass, investigates the case.

While others turn a blind eye to the deaths of the men, in Hornblum’s telling, coroner Heshel Glass—the protagonist—refuses to look away.

When seeking to explain how such tragedies take place in institutional settings, commentators often find themselves pointing to external factors—city budget issues, racism, how society regards prisoners, and the like. Instead, Hornblum emphasized issues within the correctional environment, recounting that “it was a confluence of a lot of negative factors.” He explained, “in the summer, when it gets very hot, and you have an overcrowded facility (as it was in Philadelphia), with approximately 1,500 inmates in a facility that was built for 750. You have tremendous anxiety and outrage and disgust. Inmates fight amongst themselves. They fight with guards. Tempers are short. You will also have an understaffed facility. The guards…got a hard job as it is, and they take it out on inmates.”

While others turn a blind eye to the deaths of the men, in Hornblum’s telling, coroner Heshel Glass—the protagonist—refuses to look away. A Jewish immigrant without higher education or medical credentials, Glass holds “no aspirations for higher office and generally avoid[s] controversy,” yet when he begins to discover the extent of the cover-up led by high-ranking government officials, Glass works tirelessly to expose the truth.

As Glass investigates the cause of the inmates’ deaths, layers of the Philadelphia political machine are revealed. The mayor—who regards the inquest solely as a threat to his (and his city’s) reputation—threatens the coroner and his colleagues’ careers, and their physical safety. When the police investigators cite a fallacious rationale for the inmates’ deaths—that the deaths were caused by prisoners fighting among themselves—the prison administrators and mayor were eager to accept it. In an effort to reveal the truth and achieve justice, Glass calls upon inmates to testify about what really happened, yet they resist his requests for fear of further punishment. Nevertheless, he presses on despite the growing institutional pressures to stay quiet.

These obstacles are what reveal the coroner’s true character. Glass is “just a decent person,” as Hornblum describes, and “he does have a conscience.” Glass follows his moral compass and stands “up to the entire political machine of Philadelphia,” blowing the whistle on the gross mishandling of the Klondike deaths.

Much has changed within the penal system since this episode took place over 80 years ago. The recent decline in both incarceration and a growing  consensus in favor of criminal justice reform point to gradual evolution. But unlike these figures, which one could measure with more-or-less objective criteria, “inmate mistreatment” can be defined and described differently. Hornblum weighed in on whether the issue has gotten better or worse since the Klondike incident: “Things have gotten better. Prisons are not nearly as brutal and barbaric as they were in this particular instance…That’s not to say that some of these nasty brutal instances can’t occur periodically, but they’re not as frequent or not as great. There’s better oversight.” For such a grim story, I found Hornblum’s optimism refreshing. As he put it, “as time goes on, the arc of history shows that people and societies generally become more enlightened.” Too often we forget this. We fail to acknowledge, as thinkers such as  Steven Pinker and  Hans Rosling have argued, that the story of humanity is overwhelmingly one of remarkable progress.

While it is easy, at times, to overlook progress, the Klondike story demonstrates that it is just as natural to grow complacent with a lack of progress. This immobility was left unquestioned until the coroner entered the scene. This is not unlike the story of a similar yet more widely recognized event: that of the Tuskegee Syphilis Study. In an article for Tablet earlier this month, Hornblum similarly recounts the story of one person standing up against “a great injustice.” That person was Peter Buxtun, a rank-and-file employee of the United States Public Health Service: “…Buxtun wasn’t your average social crusader. His capacity for principled combat over many years would prove nothing short of extraordinary. ‘I didn’t dedicate my life to catch the bad guys, but it just irked me what was going on down there,’ he remembered. ‘What rotten bastards they were.’” A real-life Heshel Glass, it seems.

The Klondike Bake-Oven Deaths stands out from its non-fictional counterparts—both Hornblum’s and others’. While closely following the actual events, Hornblum expertly blends the hard-hitting style of non-fiction writing with the creativity of fiction to peel back the curtain on the corruption of this horrific episode, thus successfully tapping into the reader’s sympathies. One example of such moments is the Philadelphia mayor’s response when the coroner raises his concerns about the Klondike situation: “You’re crazy…Let me warn you…if you persist in making wild allegations, you’ll find yourself pushing a wheelbarrow on Market Street and sweeping manure off the road. Your days of elected office will be over.”

Similarly, he writes pointedly in another favorite passage of mine, one that touches on the essence of the insides of prison life:

“Hour after hour in hot overcrowded cells with just bread and a cup of warm water took its toll. There was no movement. The men just stewed, perspired, and grumbled in their cells. Gradually, support for the protest began to fade away. More and more men over the weekend asked to go to the mess hall for some real food as well as the yard for fresh air. Hell, some guys would have probably killed for a glass of ice water.”

Ultimately, Hornblum produces a novel that effectively pairs descriptions of real events with the expressiveness of storytelling. He also explores—as he did in his previous non-fiction works—an event from the history of his hometown, Philadelphia. Although the prison itself closed in 1995, the building—foreboding as it is—still stands, visible to the countless commuters making their way along Interstate 95. Thanks to Hornblum’s novel, that abandoned building beside the highway can receive a much deserved second look, reminding those passing by of a barbaric event from long ago. It is something to be forgotten no longer.

Asher Ellis is a contributor at Merion West.