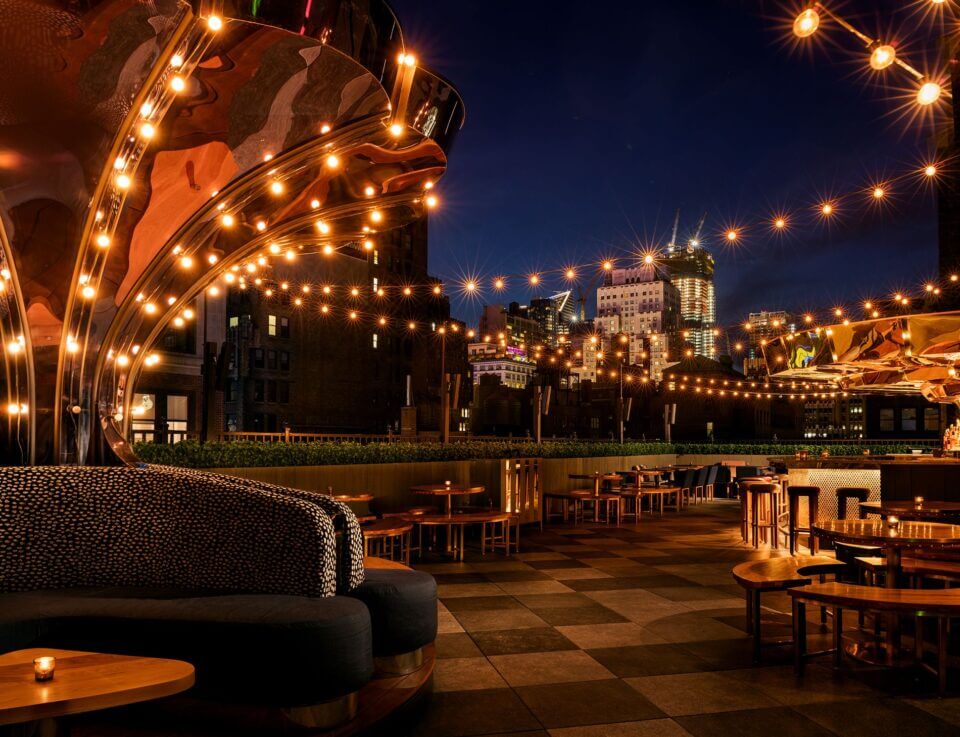 “Left movements exude the zest of adolescence, which is why they can generate so much thrill and camaraderie and—when they occasionally succeed—such deflated confusion and hollowness.”

If you have also discovered that it is best to keep your diary double-sided; if you would not want to be denied the standard at a protest any sooner than you would leave the invitation to a black tie unanswered; if you take your Folgers instant and your Aperol spritzed; if you would like to have your cake and let them eat it, too—if, in short, you have fully come to terms with your contradictions—then you will have already gathered this much: the Left knows how to party.

This is a hypothesis. My sample is still modest. It includes several nights at anarcho-communist street festivals, at right-wing student rallies, at camps under the fervid Mediterranean moon organized by a member of the Socialist International. In the United States: at conferences of (not trying to be self-descriptive) free-marketeer eccentrics with unidentifiable accents next to bars where checks come separate by default; at workshops with old labour unionists in dusky jackets and, once, at a weekend sojourn with heavyweight Democrat donors, a Mandela biographer, and a former United States Secretary of State. It has almost always, so far, been a pleasure but, admittedly, more so in the leftward provinces. Ray Wolfinger called “data” the plural of “anecdote”—so long as I am not excommunicated from either sect I will keep up the fieldwork—but there might be an obvious theoretical explanation besides: Communitarians, as many leftists tend to be, think of themselves primarily as group members and then as individuals. The party comes first, if you catch my drift. For individualists—libertarians and many mainstream conservatives—it is the other way around.

Why does it matter if the liberal Right is so palpably less fun? Because it has had the right prescription for some time, and yet it remains out of power, out of the conversation, and out of fashion. One reason must be that Randianism—whether of the Ayn or Paul genus—does not quite feel like a party. (“I saw Kennedy onstage in a hotel ballroom,” at an eighties-themed banquet, Robert Draper  describes the Fox Business host, formerly of MTV, “wearing purple spandex, gyrating to the soundtrack of ‘Flashdance’ and hollering into a microphone, ‘Are you hungry for more liberty?’”) Here is the best our species has come up with: individual freedom of speech, of enquiry, exchange, movement, association, and worship—or blasphemy. But the Enlightenment led us here from the wrong starting point. In his 2018 book The Great Delusion, international-relations theorist John Mearsheimer, briefly ventriloquised by Aristotle, discovers that as a matter of biology we are not self-contained individuals forced into a communal life. Instead, we are social creatures who must make some room for our individualities. Libertarianism is to political theory what the Tychonic system is to astronomy: You can use it to navigate practical problems with brilliance, even as its description of the world has the wrong thing in its center.

But those who believe that they are unfettered singularities—at least by nature if not by circumstance, “born free, everywhere in chains,” as Jean-Jacques Rousseau puts it—are prone to forming introversive, countersocial habits. (An English magazine of his time called Rousseau “a recluse of the gloomy, misanthropic type,” while Edmund Burke shrugged at his “unsociable fierceness.”) Pondering dullness of historic proportions, Adrian Wooldridge distinguishes late-19 century British Prime Minister W.E. Gladstone: “If you were not such a great man,” Catherine Gladstone had told her husband, “you would be a great bore.” Before joining the Liberal Party, his greatness had split from the Tories as a Peelite: a free-trade conservative. Victorian prostitutes who had the misfortune of being chosen for his lectures on Christian virtue (if we believe certain apocrypha) may have agreed with the missus. “Do you think it so easy to have me become your lover?/Do you think the friendship of me would be unalloy’d satisfaction?/Do you think I am trusty and faithful?” asks the laissez-faire naturalist Walt Whitman, who loved freedom so much that he emancipated his stanzas: “Have you no thought, O dreamer, that it may be all maya, illusion?”

Normally, the Right is not interested in being made to laugh because it winces at irreverence, which is the heart of humor.

There is at the grand junction of psychology and economics a small literature, summarized by  Amitai Etzioni, to support all this. Experiments since 1993 have produced some evidence that reading economics—which is to assume that individuals are narrowly self-interested—makes students more narrowly self-interested. Homo Economicus is an elegant model of human behavior but, as any theoretical representation, it is a lens as well as a mirror. We tend to behave how we expect others will. To add another antidote to levity and mirth, conservative individualists are also likelier to be anxious. A growing cadre of researchers led by John T. Jost of New York University find an association between conservatism—defined as a preference for status-quo institutions and for stability over change—and a heightened awareness of threat and of one’s own mortality. (It is unclear and somewhat unimportant which way the causation runs. As Thomas Hobbes bemoans in his autobiography, “My mother gave birth to twins: myself and fear.”) You would expect that by situating oneself in a grand tradition that transcends one’s lifespan, one can temper the angst of permanent oblivion. But the belief that we are au fond dissociated atoms inhibits this comfort.

By now, you have thought of some great reactionary wit you used to know and quickly doubted whether you ever really found him to be very convivial. Or you have let yourself imagine shooting the breeze with President Ronald Reagan or William F. Buckley. (President Reagan was a Hollywood socialite and must be counted an exception; Buckley was a genius but, since he repeatedly declined a jaunt to the pub with Christopher Hitchens, you probably could not even get his four-in-hand tie knots to let loose.) Of course conservatives can be fun and wry and some righty raconteurs, like Dennis Miller, are the best in the comedy business. But such examples are rare (open-mic night is the wrong time to insist on equal ideological representation). Normally, the Right is not interested in being made to laugh because it winces at irreverence, which is the heart of humor. Ancient institutions and civilizational legacy are not for cheap chuckles. Even though he was sympathetic to their cause, notice W.B. Yeats’ contempt for the Irish revolutionaries of 1919:

“Come let us mock at the great

That had such burdens on the mind

And toiled so hard and late

To leave some monument behind,

Mock mockers after that

That would not lift a hand maybe

To help good, wise or great

To bar that foul storm out, for we

You have also, I am sure, thought of some prominent socialist bores (whom you and I have previously discussed), and you are about to remind me that to the illiberal Left we owe the dreariest societies conceivable. But authoritarians of any sort are tedious by definition. Strong community on the Right can grow deep but not broad, and it has too often taken the ethnic or religious forms or both, as it has less frequently but no less disastrously on the Left. This cannot be fun for everybody or for very long. Even if the souring of such communities was not merely a matter of dating, to subject our inborn gregariousness to natural or supernatural absolutes is to miss the point: Immutable authority is hyperallergic to irony and taunt, without which there can hardly be a memorable conversation or friendship worthy of the title. (Both American and Soviet constitutions guarantee freedom of speech, goes an old Russian joke, but the American also guarantees freedom after speech.)

The unmistakably Abrahamic character of today’s progressives should make the old New Left quiver and blush for the state of the stock. But, in general, radicals and Marxians are engined—I confess—by a very alluring naïveté. One finds their sense of riding the great harvester of history electrifying. (Buckley’s conservative equivalent, to stand “athwart history, yelling Stop,” is nearly as seductive.) Their social faculties are in top form, and they are at their most charming, when out of power. Left movements exude the zest of adolescence, which is why they can generate so much thrill and camaraderie and—when they occasionally succeed—such deflated confusion and hollowness.

What can be done when the fairer ideology is at a social disadvantage, when its organizing principle is principally unsuited to organizing?

No, we must compare like to like. I had no trouble making up my teenaged mind when, on occasion, a free concert organized by some group of young syndicalists coincided with one put together by the National Voice of the Greek-Spirited Youth (a loyal translation). The pop-rock, at the former, sounded better. The atmosphere felt less contrived; the sun and the girls warmer; the booze and breeze cooler. I ask myself now, in relative maturity, in which case I would be more heartbroken: if I found a dear friend or relative gripped by an essay of the semiliterate jester-socialist Nathan Robinson, or by a booklet titled If The Founders Had Twitter written by Charlie Kirk’s sideshow? Fine, then, try this instead: Would you rather have your lunch order taken by Alexandria Ocasio-Cortez or by Lauren Boebert, freshman congresswoman from Colorado and owner of Shooters Grill, a restaurant with an armed staff? The second of each hypothetical pair is intriguing, yet you cannot help but suspect that it might feel a bit like you have walked into a hostage situation.

The catch-22 seems clear. What can be done when the fairer ideology is at a social disadvantage, when its organizing principle is principally unsuited to organizing? To start with, the trend of virtual happy hours (which can either be happy or last an hour) might be godsent to the younger batch of smart but not suave libertarians. No one stands out when poor software generalizes the awkwardness. But more pertinently: If you speak, as I do, good reader, in liberty-loving declensions, then I trust you will prove to be atypical. It will not even occur to you, for instance, to describe all this as the digressions of a rational but haughty cynic. You will not dare resort to fashionable faux-seriousness: unsmilingly waving off my observations as frivolities—no, dangerous distractions—at a time of national emergency (which appears to be a permanent state of affairs). And, take note, that whenever we next meet over a few pints of Sam Adams, one of us will smoothly make for the bill while the other, setting aside all Randian instincts, will at least pretend to put up a fight.

Vahaken Mouradian is a Cypriot-Armenian essayist based in Washington, D.C. After his military service in the National Guard of Cyprus, he read politics, philosophy, and economics at Lawrence University and international security at the Josef Korbel School of International Studies at the University of Denver.