Walter Lippmann and the Dilemma of Democracy 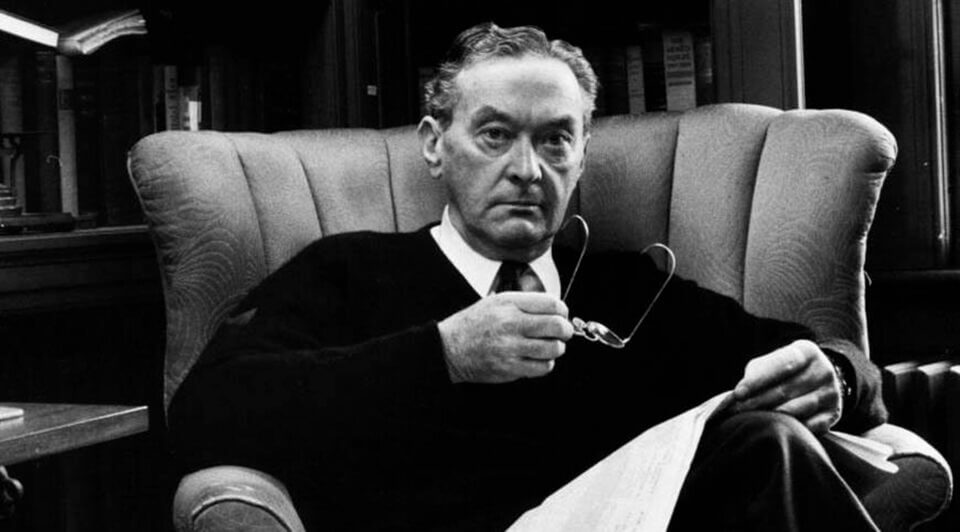 “In his 1922 book, Public Opinion, Lippmann notes that in a representative democracy, members of the public are expected to form opinions regarding public affairs with which they have no direct contact.”

In recent weeks, concepts like truth and reality have dominated our public discourse. The extent to which many Americans occupy separate realities is staggering. Shared facts are in dispute. Common assumptions are under question. It is all a bit disconcerting.

As President Donald Trump denies the legitimacy of his electoral loss, he is propped up by a number of people who are arguing in bad faith. They know that the claims of widespread fraud are false, but they have figured out some way to rationalize their support of President Trump’s efforts. However, there are a great many others—millions of Americans—who are genuinely convinced of the “election was stolen” narrative. These are true believers. They are not dumb people, and they are not deplorable. They are fathers and mothers, neighbors and friends, pastors and executives. So, why do they believe the fiction?

Lippmann and “The Central Difficulty of Self-Government”

The dispute over the legitimacy of the 2020 election brings to light what the great American journalist Walter Lippmann referred to as “the central difficulty of self-government”: “the difficulty of dealing with an unseen reality.” None of us witnessed the casting and tabulation of every vote. How are we to trust that the election was above board? And for that matter, each of us is acutely attuned to very few (if any) of the intricate realities of the various issues that animate American politics. How are we responsibly to form an opinion about all of these matters and, then, act upon those opinions as citizens, activists, and voters?

In his 1922 book, Public Opinion, Lippmann notes that in a representative democracy, members of the public are expected to form opinions regarding public affairs with which they have no direct contact. “Now in any society that is not completely self-contained in its interests and so small that everyone can know all about everything that happens,” writes Lippmann, “[political] ideas deal with events that are out of sight and hard to grasp.” As such, citizens do not have immediate contact with the reality that informs their political opinions, for “the real environment is altogether too big, too complex, and too fleeting for direct acquaintance.” Without direct access to the entirety of the real environment on which political debates center, citizens are left constructing “pictures” of reality within their heads. They then go about forming their opinions regarding public affairs and acting on them on the basis of this “pseudo environment” or mental picture of reality, which they have constructed with the help of news media and government messaging and propaganda.

There can be a tremendous disconnect between a citizen’s picture of reality and reality itself. After all, there are external factors that render our pictures of reality fuzzy, incomplete, and even delusional—constraints like “the artificial censorships, the limitations of social contact, the comparatively meager time available in each day for paying attention to public affairs, the distortion arising because events have to be compressed into very short messages, the difficulty of making a small vocabulary express a complicated world.” There are also internal constraints, like the “prejudices” and “preconceptions” to which citizens hold tight even when events occur or trends emerge that challenge their pictures of reality. And of course, “our public opinion is in intermittent contact with [internal] complexes of all sorts; with ambition and economic interest, personal animosity, racial prejudice, class feeling and what not. They distort our reading, our thinking, our talking and our behavior in a great variety of ways.”

Refracted Reality and the Democratic Dilemma

Thus, as reality makes its way into our mental pictures, it is “refracted in many ways.” For Lippmann, this presents a great challenge to the classic rationale for democracy: That all human beings are endowed with dignity and, thus, deserve to govern both their individual and communal affairs. We have the right to construct our own life projects, and so too do we, as citizens and voters, have a right to take part in the conduct of political projects—of campaigns, politics, legislating, governance, and public administration.

Romantic democratic theory, argues Lippmann, erroneously assumes that the citizen has the same sort of requisite knowledge of public affairs as he does private ones.

In Lippmann’s telling, this romantic democratic theory is not up to snuff in one significant way: We know our private realities enough to govern ourselves therein, but the same cannot be said with respect to our public life. Lippmann notes that “The democratic tradition is…always trying to see a world where people are exclusively concerned with affairs of which the causes and effects all operate within the region they inhabit. Never has democratic theory been able to conceive itself in the context of a wide and unpredictable environment.” In the wide and unpredictable environment of “a complicated civilization” such as ours, public affairs are not mere extensions of private affairs. There are great, distant, complex questions regarding matters with which the everyday citizen lacks direct contact. Much of the reality to which our public affairs pertain is “unseen,” such that our public opinions are premised far more on imperfect pictures than real, clear, lived realities. Romantic democratic theory, argues Lippmann, erroneously assumes that the citizen has the same sort of requisite knowledge of public affairs as he does private ones. This is a fiction, from which stems the democratic dilemma: Filled to the proverbial brim with ignorance, subjective thinking, stereotypes, and prejudices that are not apt to bend even in the face of compelling evidence, the citizen is not very well equipped for self-governance.

The individual has the time, capacity, and desire to know intimately his or her personal reality quite well. We are well-acquainted with the ins and outs of our work life, home life, and neighborhood life. This is not so in our public life. While the individual may approach his private affairs with relatively keen eyesight, the citizen approaches public affairs with fogged up glasses. Our knowledge of our private affairs grasps subtlety and complexity, but our understanding of public affairs is distanced and cloudy.

Thus, if we accept the premise that government and politics ought to reckon with reality (of the natural environment, human nature, etc., as I think we most definitely should), the question becomes fairly simple: How can we strengthen our grasp of public affairs, such that it resembles our nuanced grasp of our private affairs a bit more?

This is the central question that stems from Lippmann’s gripping identification and analysis of the democratic dilemma. Lippmann’s answer to it is wanting.

A Solution of Knowledge, Distance, or Time?

Lippmann is correct to point out that better record keeping and quantitative analyses of major governmental, economic, and social processes and events would help to equip citizens with the fine-grained knowledge of public affairs that could aid them in better carrying out the task of democratic self-government. Clear-eyed knowledge of the complex reality in which modern democratic politics occurs would be helpful. However, Lippmann’s solutions begin to flirt with technocratic, elitist, anti-democratic rule. For Lippmann, “self-determination is only one of the many interests of a human personality.” Fair enough. However, it is important enough that Lippmann’s proposals for independent intelligence cadres within government—tasked with relieving citizens of the “burden” of having to form “expert opinions” on all public matters—should give one pause.

Instead of answering the democratic dilemma with technocracy, we can first remind ourselves that the progression of time itself tends to resolve the dilemma, at least partially. That is, over time, if a democracy keeps the channels of open discourse and reasoned debate open, the truth of matters tends to emerge. In the words of Edmund Burke: “The individual is foolish. The multitude, for the moment, is foolish, when they act without deliberation; but the species is wise, and when time is given to it, as a species it almost always acts right.” Even as he critiques the Millian faith in the power of open debate to arrive at the truth of an issue, Lippmann himself acknowledges that, in the long run, the severity of the democratic dilemma he has put forth weakens: Civil libertarians’ “faith that in the competition of opinions, the truest will win because there is a peculiar strength in the truth…is probably sound if you allow the competition to extend over a sufficiently long time.”

Moreover, the problem of the democratic dilemma can be lessened by approximating the public to the private as much as possible. In other words, devolving decision-making power as much as possible can nudge our democratic reality a bit closer to democratic theory. With more power devolved—and with the issues of politics centered less on symbols and more on concrete issues affecting real people whom we know—we are better positioned to bring more nuance, understanding, and lived experience to public affairs.

Democracy will always be imperfect, as we are tasked with collectively governing a shared reality, only slices of which we know especially well.

These are not full solutions to the democratic dilemma; the dilemma will always be with us, and we are indebted to Lippmann for putting his finger on it. The best we can do is cope with it—through information gathering, patience, and devolution.

To Cope, We Must Trust

But we cannot cope very well—we cannot keep the democratic polity afloat—without trust in one another and our institutions. Ultimately, for the polity to function, we will have to trust that what happens outside of our personal experience, in the “unseen reality” of which Lippmann wrote, is not all purposefully bad: not all full of nefarious dealings. Without convincing evidence to the contrary, we must trust that our fellow citizens and government officials are not much different than we are—that they are acting, speaking, and voting in good faith, as well as doing their jobs to the best of their limited abilities within a world rife with contradiction and complexity.

With social trust absent, the pictures of reality we develop in our heads can grow rather disconcerting—full of bad actors deserving of retribution. Democracy will always be imperfect, as we are tasked with collectively governing a shared reality, only slices of which we know especially well. However, we can live with, even cherish, imperfection given the fact that the alternatives are all much, much worse. To do so, we would do well to think critically about the dilemma of modern democracy analyzed by Lippmann. We also must have some faith in one another.

Thomas Koenig is a recent graduate of Princeton University and will be attending Harvard Law School in the fall of 2021. He can be found on Twitter @TomsTakes98