Does Understanding the American Project Begin with William Penn? 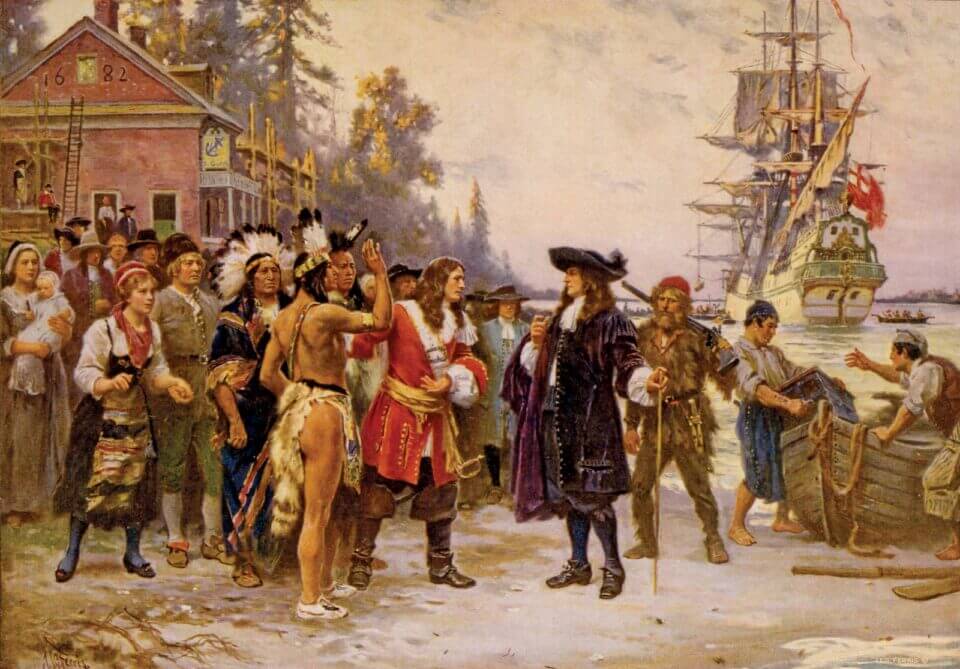 On Friday, November 20th, Olivia Malloy was joined by author Jim Proser for a discussion about his latest book concept, America’s Original Architects. Exploring his Bucks County, Pennsylvania roots, Mr. Proser found that the roles of William Penn and the Lenni Lenape people in American history are not given the attention they are arguably due. Penn’s Quakerism and the Lenape’s commitment to peace worked in tandem to shape the United States, Mr. Proser argues. As such, he hopes to rewrite the narrative, which he believes developed through Marxism, of a systematically racist nation by sharing the values of pre-Constitution Americans.

Can you tell me a little bit about America’s Original Architects and how this all started for you?

I’ve been thinking about it for a few years. I have a very close friend who is a descendent of William Penn. I grew up in this area—Bucks County, Pennsylvania—so the Lenni Lenape have always been a legend and an interest of mine. We actually had a Lenape canoe in our yard for many years as a child, growing up. My friend, whom I met later in life, is the genealogist and historian of his clan of the William Penn descendants. He always told me about these remarkable stories about the Indians and how they helped the Quakers and were very instructive and helpful to them as they had their first winter in Bucks County. These are all places that I knew as a child—what happened there, as far as Indian villages and Indian hunting arrowheads and the various camping spots of Indians around the Bucks County area.

I moved recently back to the area after 40-some years of living in New York City and Los Angeles and other places for my career, so I became interested again in the story. It just fell into my lap: the story about the Indian Great Law of Peace, which is the constitution of the Iroquois Nation of which the Lenni Lenape were a member tribe, and how that was instructive to William Penn and his Quakers in formulating the first charter for Pennsylvania, which later became the model for the Constitution of the United States. Doing more research on that and the early history of the Lenape, I realized that they were the senior partners in the negotiation in that they instructed William Penn on the finer points of self-governance that they had developed over many millennia and passed down in oral tradition. Penn, I discovered, was also a natural legal scholar. He was not highly educated; he had some higher education but not a lot. He wrote a great deal, and some of it was foundational for English common law, so he was a naturally gifted legal mind. In combination with the Lenape tradition, they fashioned what became the cornerstone of the United States Constitution. It was recognized by John Adams and Thomas Jefferson—well, Penn was, himself—as a remarkable and now largely forgotten Founding Father of our nation. So that’s the story.

So, why does William Penn—among the other major colonists—stand out to you so much?

Well, he was the first. He was the first to negotiate with Native Americans as a Christian, keeping the Christian-Quaker pacifist traditions in his negotiations. He actually regarded the Native Americans as equals—equals under God or individual souls that are endowed by their creator with certain inalienable rights—and he was able to create a lasting treaty with them called [the Great Treaty], which was concluded and negotiated at Shackamaxon, just on the outskirts of Philadelphia in Fishtown. So, he was actually able to fashion an enduring document—actually, a series of documents, a series of treaties that they signed that lasted for 75 years and were never broken until much later with the onset of the displacement of the Lenape in Pennsylvania. He was a founder in the sense that he was the first to actually create the underlying law or legal framework that our legal system is built upon. That’s why he’s so special.

Can you talk a little bit more about the legacy that William Penn and the Lenni Lenape people left on Pennsylvania and how that was transformed into the working model for other colonies? Why do you think that is so overlooked now?

I think it’s so overlooked because Penn passed away in the early 1700s, 60 years before the Declaration of Independence and 70 years before the Constitution. He wasn’t current when the Constitution was created, but he was heavily referenced and referred to in the work and by the founder who created the Constitution. The peculiarity of Pennsylvania was having to do with the nature of the Lenape culture, which was peaceful. They were surrounded, generally, by warring tribes like the Susquehannocks, the Munsee, the Iroquois, the Mohawk in northern New York. The Lenape were called the “grandfather people.” They were the negotiators; they were the peacemakers among Indian tribes. Other tribes would travel to the Lenape for counseling and to have the Great Law of Peace reminded to them so that they could negotiate their various peace treaties, war treaties, trade treaties, or whatever they were conflicted with. The Lenape passed that tradition onto the Pennsylvania settlers who were Quakers and inclined to peaceful resolution of any conflict. So—very much—Pennsylvania became the model and counterpoint to the assertions of the 1619 Project that says that American was founded on racism and slavery. It was actually founded in brotherly love and peace.

I wanted to ask you about that, as well. So, there are existing projects that also try to reframe the general narrative, like the 1619 Project that outlines a really racist history of the United States and then the counter to that, 1776 Unites, is more about African American resilience throughout American history. How does America’s Original Architects situate itself among these projects? Are they mutually exclusive, do you think?

No. America’s Original Architects refers directly to and is dependent, really, on the Lenape people’s sort of obsessive aversion to any hint of slavery. They would, reportedly, much prefer to die than to become slaves. It was an almost pathological fear among them as a culture. I think that is their most important contribution to the legacy first of Pennsylvania, which was, as you know, one of the terminals of the Underground Railroad. One of the beginnings of the abolition movement was the Quakers in Pennsylvania who learned from the Lenape the abhorrence of slavery. That’s why America’s Original Architects is so central to the argument about the American approach and the American attitude toward slavery.

In the proposal, you called this idea “a healing balm to the bitter divisions in American society.” How do you see that playing out in the current political climate, with so much division and tension?

I think, again, we have to refer to the original documents and the original accounts of how the country was founded. If we refer to the original documents and they indicate and remind us—and our children are educated to the facts—of the Christian concept of brotherly love and the Lenape concept of individual liberty that was prevalent, they fused together to create the unique culture of Pennsylvania. It was, as your earlier question referenced, a model for the other states to some degree, at least in their legal framework. We can see that this unique, peaceful approach to life and respectful approach to other cultures allowed for what became known as the “melting pot” culture, where we could accept cultures from around the world, and everybody became an American—not hyphenated Americans. I think, today, the encroachment of Marxism through academia has given us the old Marxist paradigm of division by class, which we have translated into division by gender, division by race, division by any number of parameters, which is a false—and actually deadly—approach and worldview.

So, with Marxism making a resurgence right now in some circles, what kind of response do you anticipate for this? I know that the 1619 Project and 1776 Unites had pretty strong reactions. Do you expect to see that with your work?

I certainly hope so. This is a fight, make no mistake. This is a war for the future of our civilization. We are Americans, but it’s not particularly American. It’s Western Civilization that is being challenged as a racist and capitalist and oppressive system—a system of hierarchy by power. This is patently false and provably murderous in its applications.

What would you say to a critic who says that this project might be overly romanticizing American history?

Well, it’s the factual account of history. If people take the facts, they will realize the love at the center of the factual account—the agape version of Christian love and goodwill towards men that is endemic to the project of America.