The Oedipus Complex of a Nation in Flux 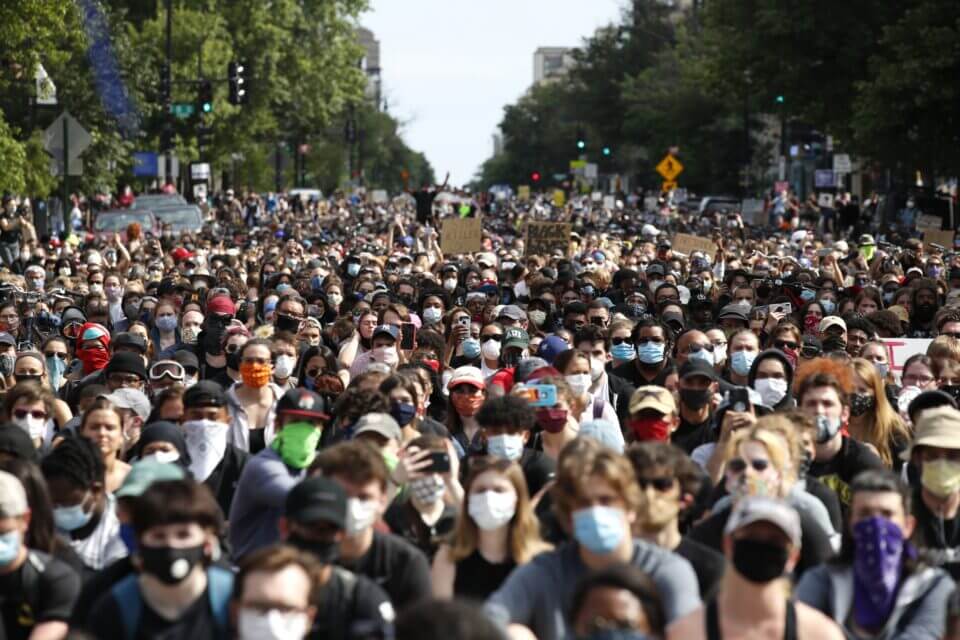 “Reading it specifically in the context of the current societal struggles and apparently widespread cultural conflicts occurring in the United States today, the myth imbues the reader with a redoubled vigilance.”

Grown men and women fighting in the streets. The scourge of the Coronavirus (COVID-19), writ large in case counts and death tolls. Partisan conflicts, stoked by a media bent on truth-telling yet hellbent on maintaining its ability to tell that truth and tell it predominantly. The United States—and the so-called first-world—today is playing a discordant tune before a disheveled backdrop.

Reading Sophocles’ Oedipus Rex (English version by Dudley Fitts & Robert Fitzgerald, 1977, Harcourt Brace Jovanovich), one generally is brought again into awareness of a foreboding-and-recollection of the potential for multifaceted social and personal crisis. Reading it specifically in the context of the current societal struggles and apparently widespread cultural conflicts occurring in the United States today, the myth imbues the reader with a redoubled vigilance.

As it has come to be commonly applied today, the myth of Oedipus, thanks in large part to Sigmund Freud’s theory (and the resulting conversations and work it has engendered), evokes from the layperson a now-collectively-latent understanding of “kill your father, marry your mother.” This is a shorthand which, in effect, is taken to mean “kill, detest, or envy your father from a desire to marry or possess your mother or her attention”; the interpretation focuses on the individual psyche, and it nearly always provokes an inferred connection of the myth to psychoanalysis. This belies the totality of the impact of the myth’s message: its applicability to the nation itself.

Oedipus Rex is set in ancient Thebes, a city which at the play’s outset suffers from myriad plagues and tribulations, despite its storied past. Oedipus is the vaunted Theban king; he is as good as above criticism, as he has delivered the city from past conflict. The general backstory that constitutes the plot’s suspense follows: Oedipus was removed from Thebes as a child by his parents due to a prophecy that claimed he would kill his father and beget children with his mother. Laïos, the then-king of Thebes, and Iocaste, his wife, unknowingly have already fulfilled the prophecy. Oedipus, then, comes into that horrible knowledge in his attempt to discover who killed Laïos so that person can be banished in accordance with a later prophecy which foretold that for present-day Thebes to be free from ill, Laïos’s killer must be exiled or killed. Oedipus—at once—discovers his true ancestry and the prophecy he has fulfilled in concert with it.

Let us now apply the myth to the constitutional republican nation. The plot and its major characters, rescaled: A selection of the nation’s people, whether through educational or social lacks (and by their own direct fault or by that arising from trust in and subsequent failure of the government), are “banished” via the subsequent tapering of perspective (and/or prospective) from their country in their youth. They are exiled from their father (in this case, the solidity provided by the nation’s structure, laws, and customs, or the acceptance thereof) and their mother (the “source of life” as it were, which provides necessary comfort and controlled psychic connectivity to the inherent chaos and unpredictability of the world, and which confirms the nation’s values). They, then, establish life in another “nation,” with different “parents” who likely address the ills inherent to the human and nation’s condition differently than was done in the original nation—arising in a different context in which different strains and ills are necessarily foregrounded (more directly, for our present purposes, some counter- and sub-cultures).

(To be clear, “a selection of the nation” does not necessarily imply base identitarian factors, as such a selection could be geographically-based, ability-based, diet-based, etc.— objective criteria in that they to a deciding extent are either based on active choice or are accountable due to factors that could be altered by active choice, or in that they are due to natural variations such as height, IQ, etc. (which also to some extent are epigenetically malleable)).

In Oedipus’ case, this banishment was his expulsion from Thebes by his parents to a remote mountainside, Kithairon, with his feet pierced and bound at the ankles. Life, however, conspires to perpetuate itself, and warmth may be found for the weak and helpless to this end in otherwise indifferent strangers. Oedipus was taken to Kithairon by a shepherd loyal to Oedipus’ father; despite orders to leave him, the shepherd unbound his ankles and handed him to a second shepherd from Corinth, who upon his time to return home took Oedipus with him. In Corinth, Oedipus was adopted by the king, Polybos, and his wife, Merope, who had no other children.

Back in the context of the nation: The “banished” people find happiness and comfort in their new context, like Oedipus did. The new-context upbringing/teaching, however, is incompatible with the true origin, insofar as it does not recognize it as positively foundational. However, at the time the people do not—cannot—realize the incompatibility (as with Oedipus). In Oedipus’ case, this blindness occurred relative to the prophecy and his real parents; in the nation’s case, this refers to any philosophy that fails to acknowledge the inalienable rights of the individual, in theory and in practice.

In one way or another, the “banished” people come into the knowledge—however hazily—that they will, by living as they do in their new way, kill their Father and wed their mother, metaphorically. This means that their way of living will come into conflict with their origin. This is confusing for them, again, due to perspective. For raised as they were in the new context from early youth, they believe their original Father and Mother to be those which in actuality are derivatives, adoptive parents relative to the origin (Oedipus’ Corinth to Oedipus’ Thebes).

But the origin remains the origin, objectively incorruptible. And the prophecy remains a threat all the while, by the “banished” peoples’ (Oedipus’) and the original parents’ (Founding Mothers’ and Fathers’) near-necessary lack of understanding of their common origin. And the world hurtles on toward a collision it does not realize will have already happened upon their realizing it has happened.

For Oedipus, this collision was his realization that years before—on his way to Thebes upon fleeing Corinth out of fear of the prophecy which he believed stated he would kill Polybos and Merope—he had killed the king of Thebes, Laïos, who at that time (and still later) he did not realize was his father. For the nation in flux, this collision is the daily struggle to decrease the gulf between those with variant assumptions while maintaining its own foundational validity: something that can only be done through disinterested, constitutional adherence.

There are moments of frustration in the plot of Oedipus regarding dramatic irony—points at which the reader rues the characters’ “blindness for their eyes”; their pride and stubbornness aimed at preserving their view of the situation; or even just that situation’s peace, despite all present evidence. Examples of these moments include Oedipus’ mention of the scars on his ankles, which he had had since before memory, concomitant to his knowing that his wife and her deceased husband, Laïos, had left their boy baby on a hillside with his ankles pierced and bound three days after his birth. Oedipus was oblivious, as were his advisors, but his wife, Iocaste, knew. And she held onto the secret once she had realized it (at which point this occurs, the play’s plot leaves unclear), by all indications simply to subvert the dread she felt at understanding that the prophecy had already come to pass, a dread which would be collectively realized once it was spoken.

An operative question, given today’s social climate and the seemingly conflicting worldviews which have arisen within it: Where exist these moments of frustration, this dramatic irony, in/for the United States and its constitutional, similarly polarized cousins?

A hypothesis: the more people among the collective first-world populace who stop to ask this question—as a result aiming first to neutralize their polarizing biases by spading deeper into themselves, deracinating and empathizing instead of piling onto the patina of discord—the more staid and tolerant the community will be(come).

Oedipus, upon realizing his complicity in the dissonance of his idea of his origins and their actuality, upon seeing Iocaste, his wife and his mother, hanging from a rope tied to a beam in their palace, ripped the brooches from Iocaste’s clothing and drove the pins repeatedly into his eyes. Taken metaphorically, this constitutes Oedipus’ ruing the blindness that his limited perspective brought. It also refers to his repeated, perhaps-willful ignorance of the mere possibility that the Apollonian oracle (the existence of which for the Greeks—and a view which is driven home in the three odes with which the play’s scenes alternate—encompassed the uncertainty and unpredictability of human life) was correct in its warning. In Ode II, the Chorus reflects upon that warning and upon acknowledging and heeding the uncontrollable, no matter how stable life seems:

“Haughtiness and the high hand of disdain

And any mortal who dares hold

No immortal Power in awe

Will be caught up in a net of pain:

The price for which his levity is sold”

Oedipus and Iocaste’s lack of respect for the oracle and for those relaying its message verbatim (in the play, Creon, the queen’s brother, and Teiresias, Thebes’ blind prophet) only delayed the inevitable knowledge thereof. Iocaste’s and Laïos’s fear—and Oedipus’, in a different time and place—upon first hearing the prophecy ironically drove them to face its realization. The fear caused the three to hold the prophecy as an enemy from which to seek shelter, yet, in doing so, it created a worldview that revered by-repulsion the prophecy, bringing them to its predetermined altar.

Of course, Oedipus could very well have—in response to his hearing the oracle—decreed that he would not kill any man; he could have instead governed himself by nonviolence on principle, despite any attacks against him. Such would have required humbling himself to the ways of the world, a stance which, upon his running into the countryside and ultimately meeting, being attacked by, and killing his father at a dark crossroads, would have meant him possible physical harm. But Oedipus Rex is a story of pride and ignorance: of a lack of respect, through fear, repulsion, and aversion, for the pain and conflict the world cloaks and brings, and of the effect of ignoring one’s delimited, physical place in this painful, conflicting world. Conceding his life to the world’s whims, knowing that life goes on until it does not, for Oedipus would have resulted in that possible physical harm, but also in a certain mental richness (as is alluded to later in Ode II). In today’s world, it is this mental richness which is (or is as many would have it), lacking among a select few bastions who would make their voices the loudest.

In line with Oedipus and the wisdom which transcends, as much as is possible, perspective: Listen to the conflict on the wind and to impending predictions. Step back, despite all perceptions and drives to do otherwise. Accept the humanness of it all, first, including that of the predictions themselves. Then, in the context of that potential chaos, calculate your judgement. Only time will tell if the flux is deciding or merely apparent.

Patrick Burr is a writer living in Latvia. He holds an MFA from the University of Washington, where he received the program’s Nelson Bentley Prize.