The Unimaginative Hysteria of Umair Haque 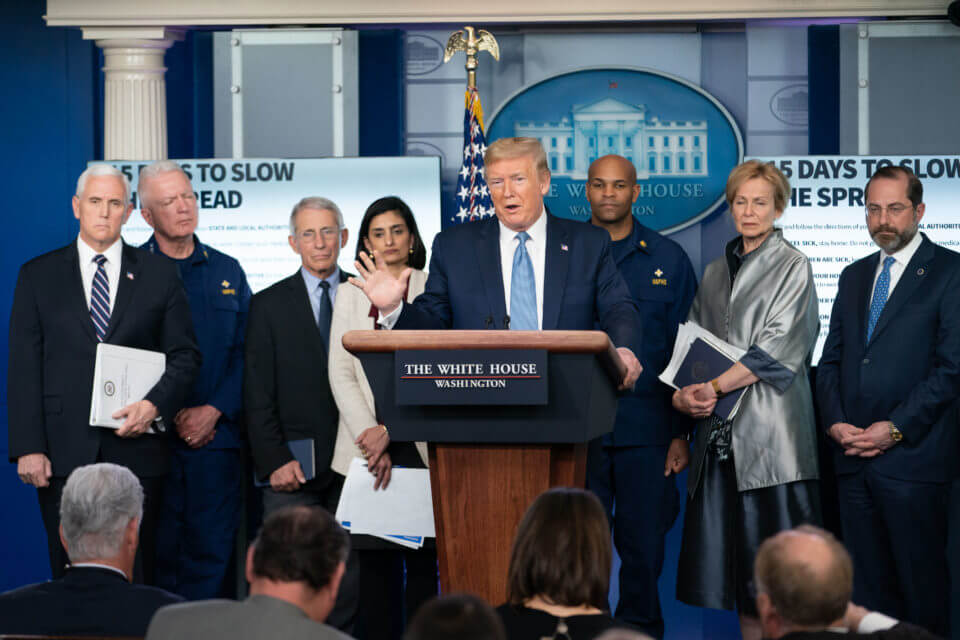 “Never mind that it is the Trump administration standing up for Uyghur Muslims, actual victims of genocide, by imposing sanctions on CPC officials this past week.”

As of July 9th, the Coronavirus (COVID-19) pandemic has  claimed the lives of approximately 135,000 Americans. In his recent Medium piece “America Can’t Take Four More Years of This Lethal Idiot,” Umair Haque, the London-based business consultant, writer, and former Harvard Business Review contributor, leverages a familiar strategy: not letting a crisis go to waste for political purposes. In this July 2nd piece, Haque uses the pandemic as a lede to argue that President Donald Trump is both the person to blame for the virus’ toll on the American people—and that President Trump is also responsible for turning the United States into a “fascist” nation. He asserts that “there’s no real debate possible about the reality of America becoming fascist.” For Haque, the United States has clearly become a “dystopia” under President Trump, whom Haque labels as the “textbook American idiot.”

The implication of all of this, of course, is also that the American public is too dumb to see what is truly happening to its society. As such, Haque unimaginatively concludes, “I have no answer for the world, except to have to state the truth. Maybe Americans are this dumb.” Now, the themes of alleged fascism, the evils of President Trump, and stupidity on the part of Americans are common themes throughout Haque’s prior work; in fact, it sometimes appears that these are the only topics he seems interested in writing about. Fortunately, for we, “dumb” Americans, however, we have Haque and his wise European friends to save us from ourselves. Haque, of course, leaves us with the warning that President Trump “can still pull off stealing the next election” and, if he succeeds, we must “reflect on precisely and fully why four more years of a lunatic—one every bit up there with Caligula and Nero—like Donald Trump” would look like.

In “America Can’t Take Four More Years of This Lethal Idiot,” Haque—joining many other commentators and television personalities—begins with the misleading premise that President Trump is solely responsible for the death and economic fallout that has resulted from the COVID-19 pandemic. In his analysis, Haque asserts that, at first, President Trump “denied there was a problem, then minimized, then told people to drink bleach…after cutting funding for the WHO and backing out of global vaccine efforts.” This take is not supported by the actual record of events. In contrast, many could very reasonably argue that it was the World Health Organization (WHO), which is led by Director-General Dr. Tedros Adhanom Ghebreyesus, along with Xi Jinping, the General Secretary of the Communist Party of China (CPC), who both contributed extensively to the disinformation and inaccurate reporting on which many public health decisions rested. Medical professionals were silenced, certain scientific findings were suppressed, and misleading information was mouthed by officials at high levels of government the worldover.

Throughout December—even when it was clear that the virus was spreading from person to person, the official line of the CPC was that the virus was related to an animal market, and it was, therefore, assumed by many that once the market was shut down, the virus would disappear. However, when the virus did not subside, Dr. Ai Fen, the head of emergency at Wuhan Central Hospital, went public, saying that authorities had stopped her and her colleagues from warning the world. She then disappeared, and her whereabouts remain unknown. Furthermore, Taiwan had sought to alert the WHO of the threat of human-to-human virus transmission on December 31th, based on reports that Taiwanese doctors were hearing from colleagues on the mainland. However, the alert was ignored because of Beijing’s policy of forcing international organizations to shun the democratic island. Two weeks later, on January 14th, the WHO issued a statement that Chinese authorities had found no evidence of human- to human transmission. Even though that was the official line, President Trump still acted to restrict travel from China to the United States on January 31, a move that was met with condemnation from many health experts and Democratic politicians.

Finally, with regard to Haque’s claim that President Trump instructed Americans to drink bleach, that is simply a bald-faced lie.

Haque further claims that President Trump “doesn’t appear to care about the virus at all”—and that he is trying to thwart efforts to find a vaccine for COVID-19. In his blind rage towards President Trump, Haque fails to take note of Operation Warp Speed, which is a public-private partnership between various pharmaceutical companies and the U.S. federal government. The purpose of this effort is to answer President Trump’s call to develop 300 million doses of SARS-CoV-2 vaccine by January, 2021. Finally, with regard to Haque’s claim that President Trump instructed Americans to drink bleach, that is simply a bald-faced lie. The transcript of the April 23rd press briefing clearly shows that President Trump did not say people ought to inject themselves with alcohol or bleach to treat COVID-19, and he was merely asking the officials on the White House Coronavirus Task Force about the range of possible remedies for the virus. Despite this “Drink Bleach” statement being misleadingly peddled by numerous critics of President Trump’s, it has widely been debunked by fact-checkers, as well as contradicted by the transcript itself. In continuing to put forward this completely erroneous claim, Haque indulges in the very practices he accuses President Trump of using: manipulating the American public for his own ends.

President Trump, to his credit, is frequently successful in pointing out how unfairly the press often treats him, such as when he draws attention to how media outlets—particularly of the cable news variety—frequently take his statements out of context, crop footage selectively, or fail to report on his administration’s successes. To this point, for all of Haque’s hand-wringing about President Trump’s alleged similarity with 20th century European dictators, Haque’s brand of rabid polemical, anti-Trump journalism has far more in common with propagandists and mass manipulators of decades past than do statements by President Trump or members of his administration. George Orwell actually alluded to this phenomenon in his 1945 essay “Notes on Nationalism,” in which he bemoaned writings that amounted to “plain forgery in which material facts are suppressed, dates altered, quotations removed from their context and doctored to change their meaning,” and where “events which it is felt ought not to have happened are left unmentioned and ultimately denied.” And, then, needless to say, Haque becomes more explicit, throwing in the Left’s favorite unimaginative cheap shot, comparing President Trump to Adolf Hitler. (The staleness of this favorite go-to, Reductio ad Hitlerum, is also a subject I addressed in a previous Merion West piece, as it applies to over-the-top criticisms of Jordan Peterson.)

Haque becomes quite blunt on this fascism point, describing a hysterical projection of what a second term for President Trump would, in his view, result in. He writes:

“So if America had a fascist-authoritarian implosion over the last four years, what happens over the next four? The unthinkable does. Those camps get filled up with intellectuals, critics, dissidents, political opponents. Show trials are had, and any resistance gets quietly, quickly excised away. Secret polices and Gestapos becomes [sic] the forces which run society, along with paramilitaries. Martial law is the rule of the land—challenge it, or the leadership, at your peril. Hated minorities begin to be violently abused—even more so—right down to the point of genocide.”

Joining other commentators and entertainers who have made similar outrageous suggestions, Haque falls down the rabbit hole of true anti-Trump delirium. Never mind that it is the Trump administration standing up for Uyghur Muslims, actual victims of genocide, by imposing sanctions on CPC officials this past week. Forget the fact that it is members of the far-left, whom President Trump has recently condemned, who are demanding purges of institutions, calling for books and authors they disagree with to be canceled, and threatening with bodily harm journalists whose opinions they oppose. It is people like Shaun King of Black Lives Matter, who are suggesting that depictions of Jesus Christ showing him as white must be destroyed, while his compatriots excuse political violence against conservatives. But Americans are not nearly as “dumb” as Haque claims they are, and we can see through the absurdities that he condescendingly champions. And, if anything, with reasoning as fallacious and misleading as Haque’s, when identifying who is “dumb,” perhaps he ought to look closer to home. More than anything, however, Haque appears to be little more than another unimaginative polemicist throwing whatever he can at President Trump, hoping against hope that something he spews—no matter how inaccurate it might be—will stick.

Tony D. Senatore graduated from Columbia University in 2017, at the age of 55. He is also a bassist and musician and can be reached at tds2123@columbia.edu.

16 thoughts on “The Unimaginative Hysteria of Umair Haque”