Anti-Racism Demonstrations That Are Just Too Much 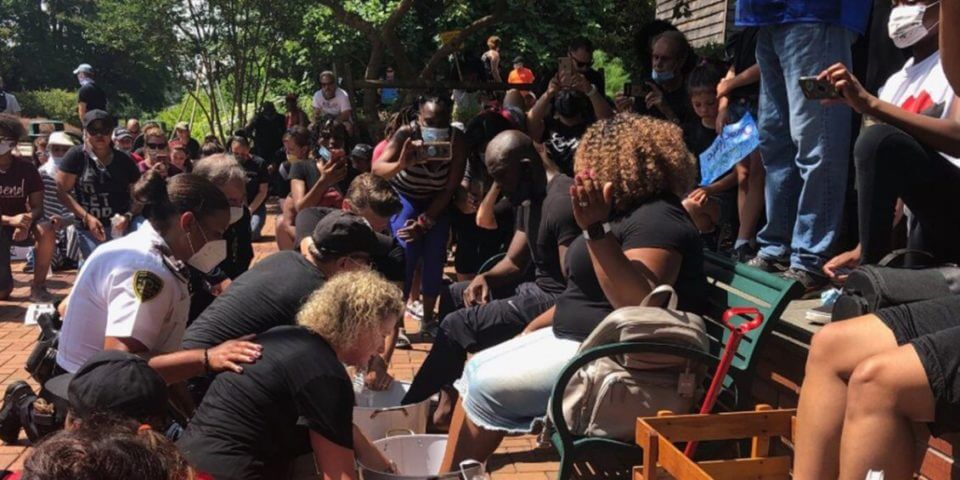 “Those doing things like reenacting a slave raid may have noble intentions, but they are sending the wrong message.”

White guilt is a powerful phenomenon. In the midst of protests following George Floyd’s death in Minneapolis in May, white Americans have been observed kneeling  in front of black Americans asking for forgiveness for racism. And, in Cary, North Carolina, a husband and wife organized an event where white residents, including police officers, washed the feet of black religious leaders in the community. Some commentators are unhappy about demonstrations such as these, and one can always debate whether anybody has responsibility for the actions of his or her ancestors. With that said, German Chancellor Willy Brandt famously knelt and asked for forgiveness on behalf of the German people for the 1943 Warsaw Ghetto Uprising during a 1970 visit to Poland. And few took issue with Chancellor Brandt’s display. For this reason, it strikes me as suspicious that the world would applaud when one kneels to ask forgiveness for Nazi atrocities but does not do the same when kneeling to atone for racism.

However, when it comes to white guilt, these gestures seldom end at kneeling. Take, for example, the below image of a 2007 commemoration of the end of the slave trade in the United Kingdom. The image portrays a recreation of a slave-raid (such as one depicted here), except in the 2007 walk, the “slaves” were white (and they wore shirts with the words “So Sorry”), and the “slave raider” was black. And during the ongoing protests, images of this event, which was organized by Lifeline Expedition, an organization that believes white Britons today must atone for the slave trade, are circulating again throughout social media. Given the way things are going, it would hardly be surprising if more events such as the one sponsored by Lifeline Expedition were to take place in the coming weeks and months. 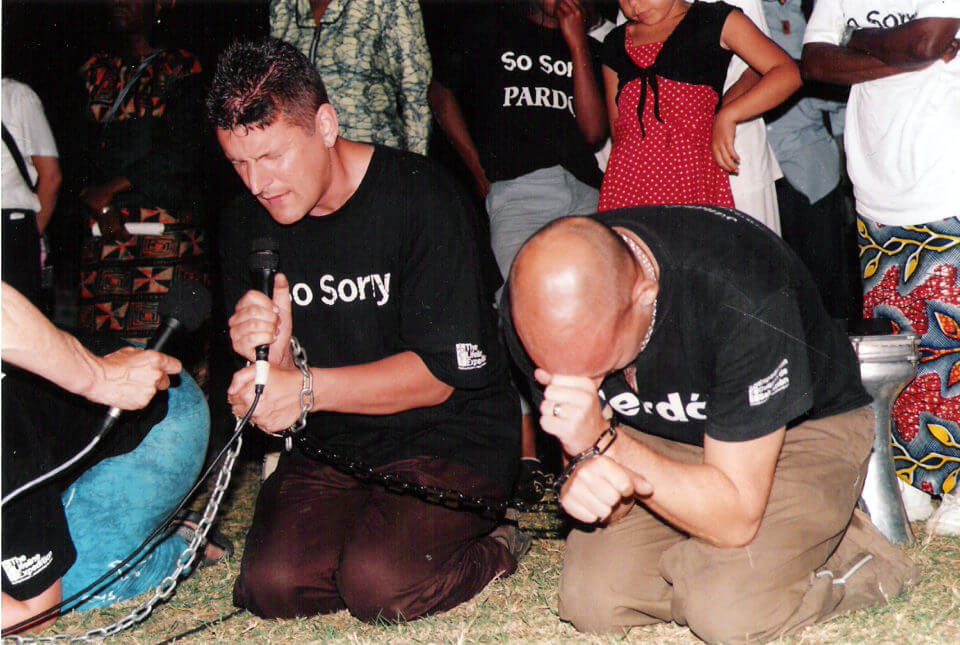 Ceremonies along the lines of the one depicted above are far more troubling than simply kneeling. Kneeling is about asking forgiveness and moving on, whereas reenacting a slave raid by switching the roles is pure revanchism. It is an example of the perverse delight some misguided revolutionaries take in turning the tables. Needless to say, such demonstrations are exceedingly counterproductive in the fight against racism.

One recurrent argument used by white supremacists in their refusal to accept certain proposed reforms is that such changes always lead to bloody revenge. In the antebellum South, some slaveholders tacitly acknowledged the immorality of slavery but worried that abolition would be the first step towards the massive slaughter of whites. The specter of the 1804 Haiti massacre was always lurking in the background. And similar fears persist today. In the dark alleys of Internet forums, there is constant talk of “white genocide,” and proponents of this theory frequently discuss post-Apartheid South Africa; to American white supremacists, this is a stark warning of what is to come if, say,  an African American should be elected President again.

Those doing things like reenacting a slave raid may have noble intentions, but they are sending the wrong message. They may assure everyone that these demonstrations are only symbolic of restoring justice, but white supremacists are unlikely to share that interpretation. For them, such “raids” are only foreshadowing what is actually to come. Furthermore, these ceremonies will not move anybody on the fence “to check their white privilege.” Indeed, the opposite is more likely to take place; it will put them on alert and may motivate them to block any reforms in race relations.

Additionally, demonstrations such as these provide a litany of other incorrect messages. These scenes clearly assume that raiders and slave traders were always white and that slaves were always black. I do not blame anybody for believing this because this is what popular culture often depicts, such as when the emotionally-powerful 1977 miniseries Roots showed a white slave trader abducting Kunta Kinte from his idyllic African village, putting him in chains, and sending him to a Virginia plantation.

We now know, however, that Alex Haley, the author of the original Roots novel, did not care much about the historical truth. In the 2016 remake of Roots, the script deviated slightly from Haley’s original story; this time, Kunta Kinte was abducted by rival African tribes, who then sold him to white slave traders.

This far more closely resembles the historical truth. Historian Linda Heywood estimates that 90% percent of slaves sent to the Americas were captured by other Africans and then sold to white traders. And this was not just forced cooperation with the oppressive white master. In reality, African kingdoms such as Asante, Kongo, and Dahomey thrived on the slave trade and were eager to engage in slave raids and slave trading long before Europeans ever arrived. This is why historian Henry Louis Gates Jr. recounted in a 2010 New York Times opinion piece how President Mathieu Kerekou of Benin had fallen to his knees apologizing to African Americans in Baltimore for the role Africans played in the slave trade. Thus, for Gates, “responsibility and culpability [for slavery]…belong[s], to white people and black people, on both sides of the Atlantic.”

This is an important factor to consider when discussing reparations—or even affirmative action—in the United States. As opposed to what happens in, say, Brazil, recent African immigrants are disproportionately  the beneficiaries of affirmative action programs at American universities. These recent immigrants are not the descendants of slaves taken to the Americas, and, in fact, they may actually be the descendants of the traders who sold slaves to Europeans. Affirmative action may have other rationales, but if the focus is on correcting the past wrong of slavery, then policies such as these cannot simply be based on race.

However, there were white slaves in Africa at the same time African slaves were reaching the New World.

And just as there were black slave traders, there were also white slaves. The word “slave,” after all comes from “Slav,” which is an indication that—in earlier times—entire European populations were subject to forced labor. But, even in more recent times, there were plenty of white slaves. There is debate about whether Irish indentured servants and abducted children (hence the term “kidnapping”) taken by force to the United States in the 18th century can be appropriately called “slaves.” Unlike black laborers, these servants had a route to freedom, and their treatment was slightly better. So, we may tentatively accept that in the Americas, there were no white slaves. However, there were white slaves in Africa at the same time African slaves were reaching the New World. Barbary Coast pirates would raid villages in Europe and take prisoners, who would then be sold in the slave markets of Tunis and Algiers. In some cases, they would be freed after relatives or friends paid ransom, but for those who did not meet the payment, life would be as miserable as for any black slave on a Virginia  plantation (they would not pick cotton, but they would row in galleys). Indeed, these were not isolated incidents. Historian Robert Davis  calculates that there were about one million such white slaves in Africa.

As such, ironically, the image of the 2007 slave raid ceremony in the United Kingdom unwittingly reenacts historical scenes that guilt-ridden white liberals prefer to ignore—because they upset the narrative that all masters and slave traders were white and all slaves were black. Those liberals reenacting the slave raid in 2007 were certainly correct to commemorate the end of the slave trade in Britain in 1807. But, while it is fine to acknowledge the immense crime of slavery, such liberals should have been prouder of what they were celebrating. Slavery has existed in all civilizations and, as I have argued, with all types of racial permutations of slaves and slaveholders. Yet, Britain was one of the very first countries to abolish slavery (Haiti was the first), and the British consequently took a leading role in eradicating the slave trade worldwide. It is a very sad fact that the country that took the initiative to end an institution that was still thriving in most other countries is now required to apologize  perhapsfar more than any other nation on Earth.

So, if, as a white person, one feels a rush of guilt and wishes to kneel before black people, do what thou wilt. If one wants to wear chains and be paraded around by black “slave traders,” have at it. However, be mindful that—by reenacting such scenes—one is sending troubling messages. First, one plays into the hands of true white supremacists who are eager to prove their claim that the current racial Zeitgeist is an existential threat to all white people. And second, just as the original version of Roots did, one is grossly distorting the historical truth.

Dr. Gabriel Andrade is a university professor. His Twitter is @gandrade8o.

One thought on “Anti-Racism Demonstrations That Are Just Too Much”