The Fuzzy Logic Behind the Movement 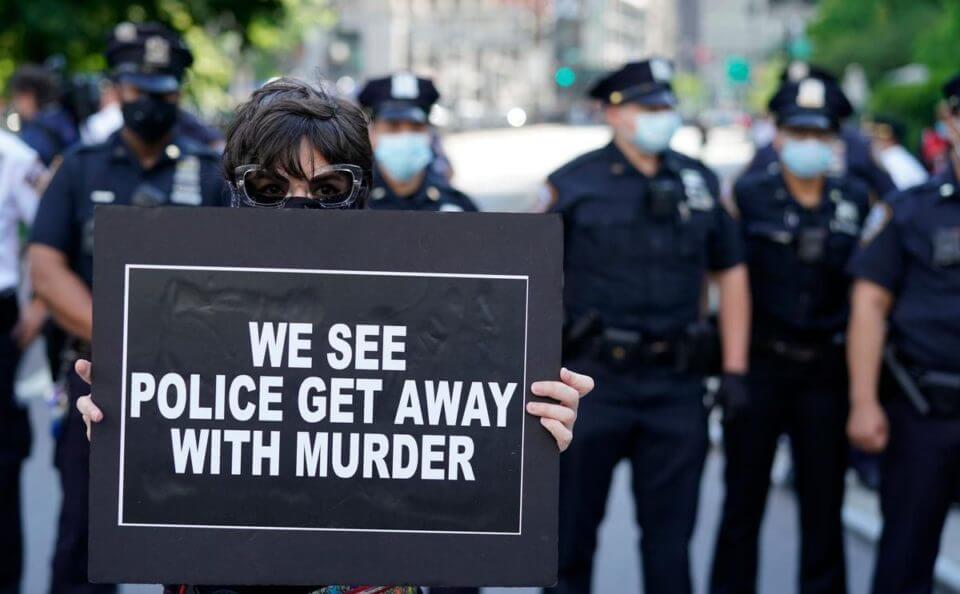 “But this discrepancy makes perfect sense if we consider the tone of racial discourse in the United States for half a second.”

The murder of George Floyd by officer Derek Chauvin was horrific beyond description, and the lack of accountability on the part of police is a major issue in the United States. Yet, at the same time, the underlying anti-racist narrative of the Black Lives Matter movement is basically wrong. Both of these things can simultaneously be true without dissonance.

The Black Lives Matter’ narrative posits that entrenched anti-black racism explains the racial disparity in policing outcomes between blacks and other groups, as well as many other inequalities in outcome that we see in society. More broadly, the implicit biases of the white population that were developed to justify its vast privileges over minorities—and t0 assuage their guilt for historical racism—come together to form a structure of oppression that disproportionately harms non-whites. This view has been churned out by virtually every mainstream media outlet, major corporation, and social media platform since the recent protests began.

But the basic premise of Black Lives Matter is wrong: There really is not significant evidence of bias in police shootings when accounting for all relevant factors. And, my view is that if a core aspect of a given political or cultural narrative is untrue, the outcome will probably be bad.

According to The Washington Post’s database, in 2019, a total of 1,002 Americans were killed by police, 250 of whom were black. In terms of unarmed police killings of civilians the total is 55, 14 of whom were black, and 25 were white. (This is compared to the 89 police officers who were killed in the line of duty that year.) At first glance, the racial composition of these numbers is nowhere near as overwhelmingly tilted as prevailing beliefs would suggest. However, considering that black Americans comprise only 13.4% of the population, a black American is twice as likely to be killed by police than what would be expected in a world of equal outcomes—and is 2.5 times more likely than a white American to be killed by police.

Even if the media exaggerates the extent of police killings of black Americans, there still appears to be an issue that could be explained by some form of bias. However, this view ignores the reality that black Americans have more encounters with police officers, a fact that cannot be dissociated from higher rates of crime. The discomfiting truth is that young black men are massively overrepresented in rates of violent crime, accounting for  over 50% of homicides nationally. This is so much the case that the number one preventable cause of death for black men under 44 is homicide,  according to the Centers for Disease Control and Prevention (CDC).

In an article for The New York Times back in 2015, Sendhil Mullainathan, a University of Chicago professor of computation and behavioral science, observed how the discrepancy between the arrest rate and police-killing rate is not large enough to back the claim that discrimination is a major factor; this suggests that removing bias “would have little effect on the killing rate.” Moreover, an extensive paper by Harvard economist Roland Fryer found that, though blacks and Hispanics were more than 50% more likely to experience some form of force in interactions with police, there were no racial differences in extreme uses of force per encounter. Moreover, black police officers are just as likely as white officers to kill black suspects, complicating the picture even further.

A common criticism of the idea that crime rates are relevant to explaining racial disparities in policing is to point out that violent crime rates do not correspond perfectly with police shootings per location. If police killings were a consequence of crime, we would expect a more direct correlation between them. In a May, 2020 piece in The Washington Post, criminal justice commentator Radley Balko writes:

“Some will argue that if we consider the rates at which whites and blacks commit crimes, these numbers make more sense. But this doesn’t hold up to scrutiny, either. In Minneapolis, for example, a 2018 Star-Tribune investigation of fatal police encounters since 2000 found no correlation between the locations of police shootings and the crime rates of those areas.”

But Balko’s analysis misses the mark. Whether there is a direct geographic relationship between crime rates and police shootings is irrelevant to whether there is a connection between black crime en masse and the greater likelihood of black Americans encountering police. In Minnesota, where non-Hispanic black males are three times more likely to be killed by police than whites, they are 14 times more likely to commit homicide, accounting for 41% of homicides in the state. The idea that rates of violence in a particular community have nothing to do with a disproportionate representation in the criminal justice system is so counterintuitive that to argue this strains one’s credibility. Which is more likely, that a culture of distrust has developed between many black Americans and police that fosters a climate of hostility, or that racist cops are pillaging black communities? We cannot address a problem that we are misdiagnosing.

So perhaps the idea that racism determines policing outcomes among black Americans is overblown, but so what? Isn’t there a broader truth to the idea that blacks face unique challenges in the United States as a result of anti-black racism—and that we would all do well to acknowledge it?

How is it possible, in an allegedly white supremacist nation, that every major cultural institution has come out in support of Black Lives Matter, that a non-white racial group outearns whites en masse, and that rates of immigration and intermarriage are so high that the fundamental ethnic composition of the country is radically changing?

Although acknowledging the fact of racism can provide a sense of racial innocence for many white Americans and righteous indignation for many non-whites, reflexively blaming discrimination for racial disparities in outcome can obscure other explanations that might yield better results, while also perpetuating a feedback loop of racial grievance. How is it possible, in an allegedly white supremacist nation, that every major cultural institution has come out in support of Black Lives Matter, that a non-white racial group outearns whites en masse, and that rates of immigration and intermarriage are so high that the fundamental ethnic composition of the country is radically changing? It could be argued that the United States is one of the least racist countries in the world. The point is that grievance can be as much a consequence of cultural conditioning as it can be a healthy response to unfairness.

This brings us to another point raised by Balko in his Washington Post piece. Many commentators have observed that the police killing of Tony Timpa, a white man who died in eerily similar circumstances as George Floyd, never garnered mainstream attention. This reveals a double standard in how these events are processed. The same double standard was applied to the police killing of Daniel Shaver, another white man who was literally on his knees pleading for his life when he was shot by officer Philip Brailsford, and this incident did not engender any kind of protest. In Balko’s telling, this has to do with the fact that black Americans feel closer to the issue of police violence by virtue of their experience, while whites Americans are at a safe enough distance from the reality of police violence that it does not elicit the same reaction. He writes:

“When white people see video of unjust police abuse of a white person, it may make us angry, sad or uncomfortable, but most of us don’t see ourselves in the position of the person in the video. If we’re polite and respectful, we think, and don’t put ourselves in scenarios that lead to confrontations with police officers, there’s little chance that we’ll ever end up like Daniel Shaver. When black people see video of Officer Derek Chauvin kneeling on George Floyd’s neck, their reaction is much more likely to be that could have been me—or my son, or friend or brother.”

So how does this explain why so many white progressives had the same reaction to the George Floyd killing—enough so to embark upon mass protests and social media campaigns? If videos of police killings of blacks hit home with blacks in a way that videos of whites do not with whites, then why did the video of a black person being killed have such an outsized impact on the conscience of whites? It just does not add up.

A better conversation about race in America would focus on mitigating ethnic conflict between the diverse groups that make up the population.

But this discrepancy makes perfect sense if we consider the tone of racial discourse in the United States for half a second. In a nation that has openly admitted to the sins of its past, there is a deep moral impulse among both white and non-white Americans to perceive any potential offense against a black person as a replay of historical oppression. This sentiment does not necessarily arise spontaneously, but it is something we learn from our culture. A highlight reel of lynchings, segregated diners, and cross burnings swells across the mind whenever a racial incident occurs in a way that does not when a white person is killed by police in weird circumstances or by a member of another racial group, which happens all the time. The logic of collective guilt and retributive justice explains why we react more to videos of unarmed blacks killed than whites, rather than it being a factor of group identity or “lived experience.” Indeed, white progressives are more likely to say that racism is a barrier for blacks than blacks themselves are.

The problem is that this moral framework is simply not sustainable. So long as racism exists—which it most likely always will, and so long as racial disparities exist, which we have every reason to believe always will—the politics of white guilt and black victimology will seem justified. But, at what cost? And, more importantly, what are we progressing towards: a society in which Americans have successfully atoned for their original sin and no racist event ever occurs, or one in which racial polarization and political tribalism are increasingly the norm? I find the latter much more believable if current trends are any indication, but we will almost certainly have a better idea after the impending wave of white backlash to the Black Lives Matter protests hits our shores.

A better conversation about race in America would focus on mitigating ethnic conflict between the diverse groups that make up the population. It would strive toward a society in which every identity group feels recognized, rather than fighting an amorphous racism that is always expanding in its definition, while the broader forces that perpetuate racial inequality and ultimately impact people of all races—geographic disparities, deficits in cultural capital, a lack of robust safety nets—remain unsolved.

6 thoughts on “The Fuzzy Logic Behind the Movement”