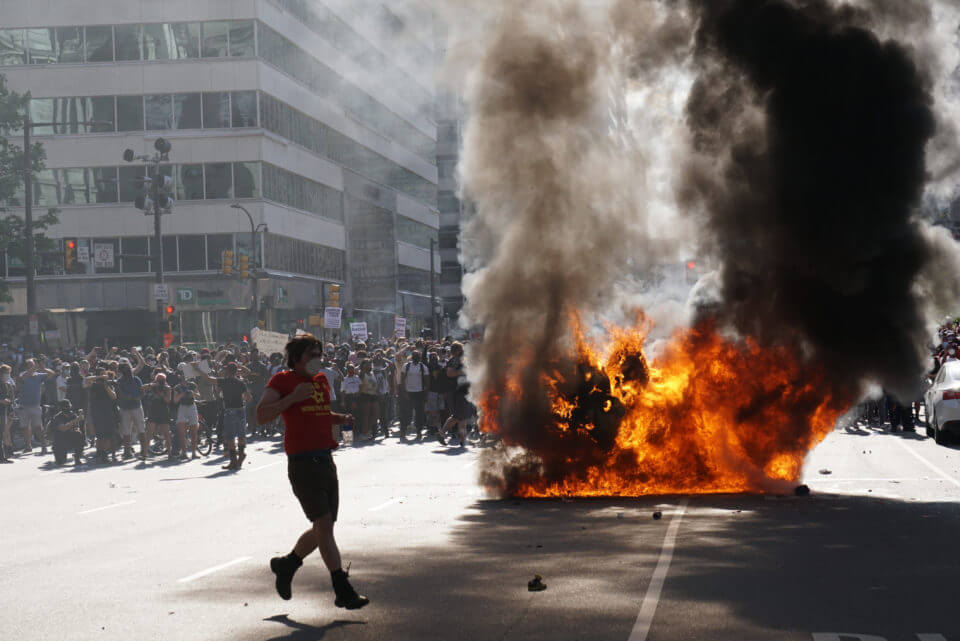 “When criticizing this violent upheaval, will [conservatives] go for the low-hanging fruit and come up with absurd, cheap explanations for what is going on? Or, will they engage in serious reflection to prevent this from happening again?”

Are the violent protests taking place throughout the United States legitimate? I do not think so. This is not to say that violence is never the answer. After all, Mahatma Gandhi’s practice of ahimsa would have accomplished nothing if India had been ruled by Nazi Germany instead of British colonialists. Sometimes, dictators do have to be toppled with force. But, for all its faults, the United States is not a dictatorship, and nonviolent protests are—far and away—the better path.

Protesters are right to be angry. Unquestionably, the United States has a police brutality problem, though I remain skeptical that this is fundamentally a racial issue. By and large, police brutality does not discriminate on the basis of race, as Wilfred Reilly has aptly documented. For example, in 2015, 1,200 Americans were killed by police officers. Of these 1,200, 21.5% were black. Sure, that share skews high, relative to the percentage of overall Americans who are black (approximately 13.4%). However, as Reilly correctly points out, when it is adjusted for the higher black crime rate, the disproportionality disappears.

With that said, protesters are within their rights to be upset, and, of course, reforms are needed in police departments. However, acts of vandalism and looting are completely uncalled for. This time, conservatives have a point: Violent protesters in the current context are criminals, period. Any attempt to excuse their behavior is despicable.

Yet, conservatives now face a dilemma. When criticizing this violent upheaval, will they go for the low-hanging fruit and come up with absurd, cheap explanations for what is going on? Or, will they engage in serious reflection to prevent this from happening again?

Two hundred years ago, conservatives faced the same dilemma. The French Revolution sent shockwaves throughout Europe. The revolutionaries were correct to be angry, and, of course, a decadent France needed reforms. But, was putting heads on pikes the right way to go? British philosopher Edmund Burke certainly did not think so, and, in his lifetime, he was on the receiving end of serious criticism for his views. Burke had supported American Revolutionaries because, in his view, their protests were legitimate—and what they proposed was feasible. The American Revolutionaries were not looking to burn down the entire system; they were only seeking to secede from the British Crown in order to reestablish freedoms that had been jeopardized by King George III.

When the French Revolution began, Burke immediately saw that—this time—it was different. This was not about mere reforms; this was about blood-thirsty maniacs who, in the name of  some abstract ideals, would chop heads off with gusto. Burke prophesied that France’s violent upheaval would ultimately require a dictator to save the country from chaos. It is important to keep in mind that Burke wrote Reflections on the Revolution in France in 1790, well before Robespierre or Napoleon entered the scene. And, as we came to see, Burke had been correct all along.

Yet, despite his fierce criticisms of the French Revolution, Burke refused to fall into the trap of saying that revolutions can never happen spontaneously. Burke’s philosophy was quite elitist. In that regard, he knew that mobs can quickly turn irrational on their own. There is no need for outside agitators to coordinate revolutions; as Douglas Murray  might phrase it, there is always danger in the madness of crowds.

This was different from the view defended by another prominent critic of the French Revolution, Augustin Barruel. A Jesuit priest exiled in England, Barruel was the author of Memoirs Illustrating the History of Jacobinism, which was published in 1798. Barruel is considered the father of modern conspiracism. According to his version of events, the French Revolution was actually the work of the Knights Templars, who did not disappear in the 14th century as a result of mass executions, as conventional historians would have had it. Instead, the Knights Templars went into hiding as a secret society, morphed into the Freemasons, and waited until 1789 to exact their revenge. The chaos of the Revolution was orchestrated by this secret and small cabal, whose motivation was not liberation or the abstract ideals of the Enlightenment but, rather, simple vengeance and pure evil.

Burke is highly esteemed as a philosopher and political theorist; by contrast, Barruel can now be considered a paranoid, delusional man who inaugurated a dangerous trend of conspiracy mongering that persists to this day.

When criticizing the ongoing violent protests in the United States, conservatives have two options. They can embrace the Burkean approach and sensibly castigate protestors for mindlessly spreading anarchy—and doing so without giving thought to the terrible consequences that will ensue. Or, they can embrace the Barruelean approach and claim that this is all the work of a shadowy cabal pulling the strings.

Unfortunately, it appears many conservatives have a soft spot for the latter approach. As the events unfold, George Soros  has been portrayed in right-wing media as the boogeyman financing chaos, with his not-so-noble intentions. And, very importantly, Soros is also Jewish. While Barruel’s obsession was with Freemasons, he did not spare Jews from his conspiracy mongering, and he also blamed them for the French Revolution. So, it ought not come as a shock that some current conspiracy theorists might ultimately point their finger at someone like Soros in order to explain the race riots.

Edmund Burke provided the grounds for a very reasonable critique of revolutionary ideology. His ideas have proved immensely beneficial in the modern world—to the extent that they have paved the way for peaceful yet effective reforms, while, at the same time, maintaining the benefits of traditions. By contrast, Augustin Barruel paved the way for The Protocols of the Elders of Zion, Pizzagate, and other conspiracy theories.

Conservatives must decide whether they wish to follow Burke’s immensely beneficial approach—or Berruel’s destructive irrationality. If they choose the former, conservatives would rebuke violent protestors for looting; they would condemn acts of vandalism by arguing that such anarchy will likely also hurt racial minorities even more (as Heather Mac Donald  has brilliantly argued in The War on Cops); they would concede that, though violent protests are not justified, police departments must urgently enact reforms. If they choose the latter, conservatives would blame the unrest on boogeymen like George Soros; they would carry on about the “Deep State”; they would show up with rifles at pizza restaurants in order to dismantle alleged pedophilia rings. History is very clear about the consequences of each approach. If one is a conservative, then the time is now to be the judge and decide what kind of future one wants.

2 thoughts on “Amid Widespread Unrest, Conservatives Must Respond Correctly”