To Stand up to China, the West Must First Re-Discover Itself 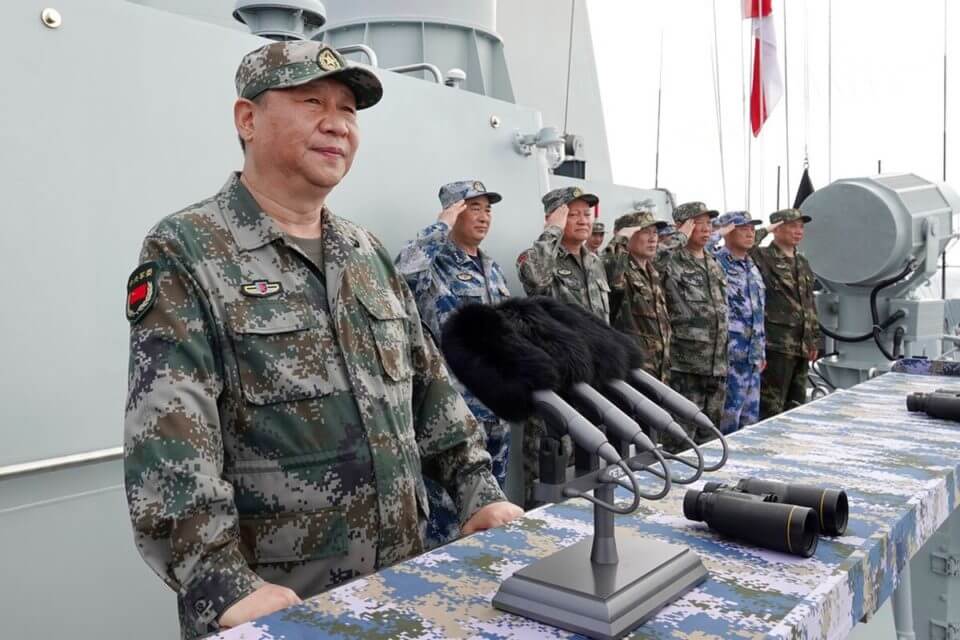 “The lack of backbone displayed by Western leaders when dealing with China is symbolic of the malaise that has been gripping Western culture for decades.”

The Coronavirus pandemic is holding the West in a vice-like grip, strangling the life out of our economies as it suffocates the life out of the most afflicted. A virus that came from China and spread worldwide through the arteries of globalization has caused a shut-down of the system that disseminated it. There has been talk of a brewing cold war with China for years now. Along with other geopolitical trends in place before the pandemic, the virus has only entrenched this new reality. Whether we are in a position to engage in Cold War 2.0 remains to be seen.

Daniel Strand at Providence argues that we are witnessing a “Clash of Civilizations” that Samuel Huntington warned would be the norm in the wake of Cold War 1.0. While we should be careful not to let the rhetoric of civilizational clash be hijacked by neoconservative ideologues, that does not mean that there is not such a clash coming. Indeed, it was already being waged through the avenues and trenches of trade war. The offer of aid to various European powers in fighting the virus China unleashed on the world is purely a power play on the part of the Communist Party of China (CCP), designed to show the weakness of our governments in their supposedly lax response. Never mind that much of the equipment offered has either been faulty or not what is needed. The arsonist “helping” put out the fire he started that is consuming the lives and economy of a continent is a sight to see.

In reality though, China has been increasingly expansionist for years now. It has been building islands in the South China sea and aggressively patrolling what it sees as its sphere of influence. It would not be a great surprise if in the next few years China declared its own version of the Monroe Doctrine. China has also expanded its physical reach through the Belt and Road initiative, gaining access to Central Asia and Europe and orienting more and more of the Eurasian landmass towards its orbit. China is the buckle on the belt that binds the globe, its vision of its place in the world rooted in its 5,000-year mythos. Alongside this are China’s efforts at building up its presence in Sub-Saharan Africa through investment and infrastructure development in return for resource exploitation.

Identity politics has become what we do as a decadent, stagnant and narcissistic alternative to being Francis Fukuyama’s listless Last Men at the end of History. While anti-Western, China apologist Left-wing MPs concentrate on victimhood, China concentrates on victory.

In all cases, China does not care about the liberality of the regimes it deals with. Operating in a pragmatic way, the CCP views the security and stability of the countries it deals with as the highest goods of diplomacy and foreign policy. Liberal causes that we hold dear in the West, particularly in our identity-obsessed therapy culture are irrelevant for a power moving into the spaces from which the West is largely absent. Instead we engage in immature, civilizational navel gazing that amounts to little more than a not-so intellectual form of masturbation. No wonder young Chinese hold spoiled Westerners in contempt, calling the SJWs baizuo, or “white Left.” Identity politics has become what we do as a decadent, stagnant and narcissistic alternative to being Francis Fukuyama’s listless Last Men at the end of History. While anti-Western, China apologist left-wing MPs concentrate on victimhood, China concentrates on victory.

Of course, as Strand argues, the weightless neoliberal view of the world and of history mentioned earlier—not to mention identitarian grievance politics—is woefully inadequate for facing the realities of life. It reveals an abstraction endemic in all ideologies of ultimate progress, whether progressive or neoconservative. It does not take men as they are, seeing them as weightless atoms extracted from cultural and historical context and contingency. The bonds of family, community, nation and civilization are irrelevant to this blank-slate view of politics and international relations. What Claes Ryn calls the neo-Jacobins of the liberal Left and the neoconservative Right both believed in the inevitable march of history. Attendant to this, as Strand says, is an “almost millenarian, American belief that liberal democracy is the best form of government and that it must ultimately win the day.”

For Samuel Huntington, a civilization was symbolic of the highest values binding peoples together into collectives short of humanity. This undoubtedly ignored nuances: Taiwan is supposedly part of the Sinic civilization but is an adversary of China. What Huntington got at was that our vision of a universalist world order, grounded in liberal, rationalist values, was not, in fact, universal. Instead, it was nurtured in and grew from a distinctive Enlightenment-infused soil and air.

Structures are more important than individuals in international affairs. However, when a critical mass of the individuals inhabiting those structures hold certain ideas and beliefs, the direction of structural forces changes. In other words, the culture of a society matters. And yet, as Robert Kaplan wrote last year in The National Interest, “The American foreign policy elite does not like to talk about culture since culture cannot be quantified, and in this age of extreme personal sensitivity, what cannot be quantified or substantiated by a footnote is potentially radioactive. But without a discussion of culture and geography, there is simply no hope of understanding foreign affairs.”

One cannot understand how and why China has modernized without Westernizing if one does not grasp this. Anyone who has even the slightest knowledge of Chinese history and culture would have predicted this outcome, and they did. The neoliberal, free-trade ideologues were too busy to listen. The secular Enlightenment view of universalism is 300 years old. China has a mythic view of itself stretching back 5,000 years. It has been a functioning society for 3,000 years. China has a continuity of culture and of identity stretching back millennia. As Lucian Pye puts it, China was a civilization long before it was a nation-state. Xi Jinping’s Chinese Dream, notwithstanding its Marxist inflection, has deep roots in Chinese history and culture. And it speaks to the Chinese beliefs in inherent greatness and civilizational power and its destiny to spread the Mandate of Heaven to mankind.

And what do we in the West have to offer? A degraded form of neoliberal crony capitalism that commodifies everything within reach and sells to the highest bidder at lowest common moral denominator. A culture that does not know itself and is desperate to repudiate its own history, a history it only dimly remembers. A culture that views victimhood as the highest moral good and sees attributes like heroism, honor, stoicism, and fortitude as remnants of a bigoted, oppressive past. Weakness of character and spirit is celebrated; forgiveness is prohibited for sins against the woke religion. Solidarity is eroded by a combination of rampant consumerist individualism and identitarian tribalism in response. Existential misery and loneliness are the result.

Kaplan makes the point that we should not assume that victory for the West is inevitable as a result of the inherent superiority of our worldview to China’s.

These are problems faced by all Western powers. The lack of backbone displayed by Western leaders when dealing with China is symbolic of the malaise that has been gripping Western culture for decades. This civilizational tiredness, what Douglas Murray describes in The Strange Death of Europe as the feeling that the story has run out, is not a state in which we can engage in a civilizational contest and be confident of success. Kaplan makes the point that we should not assume that victory for the West is inevitable as a result of the inherent superiority of our worldview to China’s. Winning the Cold War—and the peace that followed—bred complacency and ignorance of the tragic nature of life and history. We have lost a sense of our past, and what holds us together.

As R.R. Reno writes in Return of the Strong Gods, the architects of the “Postwar Consensus” saw the need to restrain the strong loves that bind people together. The strong gods are not golden idols but “the objects of our shared loves,” what Russell Hittinger calls the “three necessary societies”: family, country, and church. Open minds,  open societies, and open borders were considered—and still are considered—the way forward. Witness the fact that Britain’s borders remain open. Material prosperity, itself now gone, came at the cost of the strong gods of truth, belief in the sacred, and patriotism. We have seen a collapse in solidarity afforded by the liberal dispensation of the last 60 years. This cannot continue.

According to Reno, the fact that we are inherently social beings means the strong gods of family, community, and nation will return. Indeed, the coronavirus has simply sped up this movement. As Reno writes, we must work to “restore public life in the West by developing a language of love and a vision of the ‘we’ that befits our dignity and appeals to our reason as well as to our hearts.” The fabric of civilization, which binds those alive today with those of yesterday and tomorrow in solidarity across the generations, must be rewoven. Regaining common loves towards our culture, history and nation is essential—not just to compete with China—but to fulfill the very human goal of living the good life through community and common sympathy.

Facing the challenge of balancing against China in Cold War 2.0, we can only hope with James Burnham in his Suicide of the West that “just possibly we shall not have to die in large numbers to stop them.” However, “we shall certainly have to be willing to die.” Unless we recover the strong gods that bind us together, it does not seem likely that we will be equal to the task of resisting and containing the Chinese civilizational-state.

Henry George is a freelance writer living in the U.K. He holds an MA in War Studies from King’s College London.

2 thoughts on “To Stand up to China, the West Must First Re-Discover Itself”