“People of Color” Do Not Exist 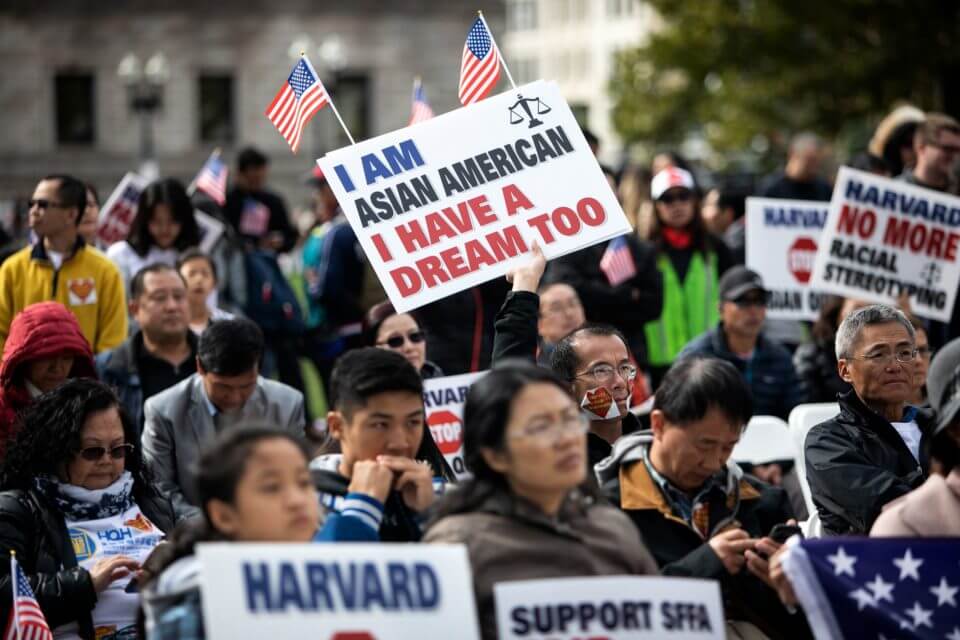 “Looking at the highest income Americans by ethnicity, we likewise find a hodgepodge of people of many colors, with peoples largely from East and South Asia, Europe, and the Middle East at the top.”

When the prominent lawsuit alleging racial discrimination against Asian Americans in admissions by Harvard University was filed in 2018, one argument repeatedly advanced against the endeavor is that the suit, among other things, is some sort of stratagem by the white establishment to create fissures among sub-groups within the larger organic group of “people of color.”

“When privileged Asian-Americans argue alongside whites that reverse discrimination is taking place, they allow themselves to be used as a wedge group, to divide people of color and position them against each other and, indeed, against less privileged Asian-Americans,” an article entitled “The ‘Whitening’ of Asian Americans” in The Atlantic by Iris Kuo tells us. Indeed, the term “people of color” has come to occupy such a foundational place in our verbiage (and in the way we view ourselves as a society) that few now stop to think whether the commonality it seeks to identify exists in the first place.

Here, as in many such instances, facts and data give us an answer: “people of color” reflects little more than an aspirational, political endeavor to forge allegiances against “white” people among an array of peoples whose experience of life in our society could not be more dissimilar.

The history of “people of color” is detailed on NPR’s race and culture outlet, Code Switch, here. Some of the highlights include these:

“People of color explicitly suggests a social relationship among racial and ethnic minority groups…[It is] is a term most often used outside of traditional academic circles, often infused by activist frameworks, but it is slowly replacing terms such as racial and ethnic minorities…In the United States in particular, there is a trajectory to the term—from more derogatory terms such as negroes, to colored, to people of color…People of color is, however it is viewed, a political term, but it is also a term that allows for a more complex set of identity for the individual—a relational one that is in constant flux.”

Frankly, my actual view is that grouping people into racial categories, an approach built on an unscientific premise—most population geneticists do not find “race” to be a valid biological category (see, e.g., here and here)—is itself a mistake that unnecessarily reifies racial divisions and polarizes people without achieving any obvious objective. But at least racial categories have this going for them: to some considerable extent, they reflect sociological realities. W.E.B. Dubois’ definition of a “Negro” as “a person who must ride Jim Crow in Georgia” referred to something that was unfortunately all-too-real. Although the era of Jim Crow has passed, we continue to live—without getting into the genuinely complicated issue of why—in an age when African Americans are far more likely to be vastly overrepresented amongst the poorest, most uneducated, most segregated, and most criminal elements in our society. And we continue to live in an age when many identify quite clearly as African American (81% of blacks feel connected to the black community), defining themselves by virtue of a shared (range of) skin pigment(s), a shared culture, a shared set of attitudes, a shared dialect…though many of these are not shared by the larger category of “black” people in America, much less across the globe. Other such identifications—“white,” “Asian,” “Hispanic”—arguably have less sociological meaning and coherence.

When we come to “people of color,” however, even this most minimal level of coherence slips away. The umbrella term aims to lump together anyone and everyone who is non-white. The problem with this is that, other than being non-white, these groups have next to nothing in common. For example, while African Americans are at the bottom of the American socioeconomic pyramid, Asian Americans are at the very top, with their median income exceeding that of whites by a whopping $18,000 ($85,349, as compared with $67,865), whereas African Americans lag far behind everyone else at $30,555. To quote a 2013 Pew Report:

“A century ago, most Asian Americans were low-skilled, low-wage laborers crowded into ethnic enclaves and targets of official discrimination. Today, they are the highest-income, best-educated, and fastest-growing racial group in the United States. And they are the most likely of any major racial or ethnic group in America to live in mixed neighborhoods and to marry across racial lines.”

Looking at the highest income Americans ethnicity by ethnicity, we likewise find a hodgepodge of people of many colors, with peoples largely from East and South Asia, Europe, and the Middle East at the top:

Moreover, punching a major hole in the story that white supremacy or systemic or institutional racism is keeping blacks down on the basis of race is the fact that African Americans have little but their general skin color in common with other black Africans in America. According to Nielsen, for example, “the median household income for foreign-born Blacks is 30% higher than U.S.-born Blacks.” The median Nigerian American income is $60,732, significantly higher than the median African-American income. Along similar lines, while African Americans lag significantly behind the U.S. average as far as their education level is concerned, sub-Saharan African immigrants generally have much higher educational attainments compared to the American foreign and native-born populations. According to a Migration Policy Institute report, “In 2015, 39 percent of sub-Saharan Africans (ages 25 and over) had a bachelor’s degree or higher, compared to 29 percent of the total foreign-born population and 31 percent of the U.S.-born population.” Again, Nigerians lead the way, with 57% holding at least a bachelor’s degree (a figure matched by South Africans). Moreover, according to a report from the New American Economy group in Washington, 16% of sub-Saharan African immigrants had a graduate degree (i.e., a master’s degree, medical degree, law degree or a doctorate), as compared to 13% among all immigrants and only 11% in the general U.S. population. This can be contrasted with the percentage of bachelor’s degrees among all American blacks (22.5%), with only 8.2% holding more advanced degrees. When Asians are brought back into the picture, the results are even more extreme. A significant majority, 60.4%, have at least a bachelor’s degree, and 21.4% have advanced degrees.

Hispanics, too, according to a much-publicized study from researchers at Stanford, Harvard and the Census Bureau, are leaving African Americans behind: the study reports that while Hispanics “are moving up in the income distribution across generations,” “potentially closing much of the present gap between their incomes’ and those of white Americans,” African Americans remain at a standstill. And even when African Americans do earn significantly more than the average, they are still quite likely to live differently from others. As The New York Times reported in 2016, “In many of America’s largest metropolitan areas, including New York, Chicago and Los Angeles, black families making $100,000 or more are more likely to live in poorer neighborhoods than even white households making less than $25,000.”

Asians also perceive their status as a group in America and their susceptibility to discrimination very differently from African Americans. Fundamentally, as reported by Pew Surveys, most Asian-Americans no longer feel “the sting of racial discrimination” or any degree of “cultural imposed ‘otherness.’”

“Just 13% of Asian Americans say [discrimination is a major problem], while about half (48%) say it is a minor problem, and a third (35%) say it is not a problem.” By contrast, 41% of African Americans now “say racial discrimination is the main reason why many black people can’t get ahead these days,” an increase since 2009, when a mere 18% agreed with that sentiment — this despite the fact that the only obvious thing that got significantly worse for blacks between 2009 and today is the degree of divisive and incendiary rhetoric on the subject of race and racism emanating from the organs of the mainstream media. According to another Pew Survey, “[a]n overwhelming majority of blacks (88%) say the country needs to continue making changes for blacks to have equal rights with whites.”

The integration of Asians (and Hispanics as well) into mainstream American society is also reflected in their much higher intermarriage rates. According to Pew, “About three-in-ten Asian newlyweds (29%) have a spouse of a different race or ethnicity. The same is true of 27% of Hispanics.” Among Asians and Hispanics who are U.S.-born, those figures are even higher: 46% of Asians and 39% of Hispanics have a spouse of a different race or ethnicity. Meanwhile, despite the fact that most blacks do not face the language barrier that could, in theory, keep many non-U.S.-born Asians and Hispanics from integration into mainstream Americana, the black intermarriage rate—18%—is dramatically lower.

The data points us toward an inexorable conclusion: in virtually every aspect of their lives—income, education, how they live, where they live, how they perceive themselves as a group vis-à-vis the rest of American society—African Americans are a glaring outlier and have little or nothing in common with the rest of us, including any of the other non-white groups we have tried to shove into the not-so-big, rickety, half-collapsed tent with a brightly lit “People of Color” sign posted at the entrance. In our society, African Americans and only African Americans (and not Asians, Hispanics or even other black Africans) experience a unique set of obstacles, or rather, experience such obstacles to a unique degree. Whatever the source of the issues faced by this community may be, if we are to have any hope of solving the problem that ultimately, whether we like it or not, is a burden upon us all, we cannot start off by obscuring it with sanitized obfuscations about white supremacy afflicting all “people of color” alike. Such ploys may do a great job forging inherently brittle coalitions to tilt at “white” windmills, but they do not and, inherently, can never solve a problem that is not real.

Alexander Zubatov is a lawyer in New York, as well as an essayist and poet.

7 thoughts on ““People of Color” Do Not Exist”