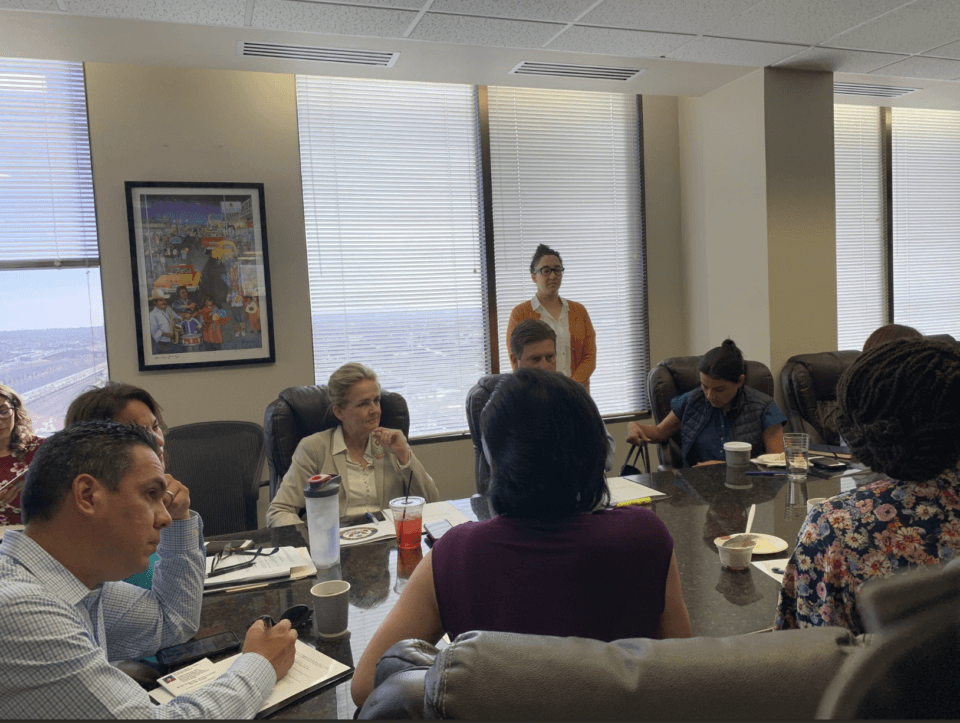 “They slid a note, children with a note under the door and said, ‘How can we help you?'”

On July 1st, Rep. Madeleine Dean (D-Pa.) joined a group of congressional Democrats visiting border detention facilities in El Paso and Clint, Texas. The trip was organized by the Congressional Hispanic Caucus and was attended by approximately a dozen members of Congress. The trip came at the same time as a report was released by ProPublica indicating that a number of Border Patrol agents, both current and former, had been part of a Facebook group where they made sexually-charged comments about certain female members of Congress—and also joked about the deaths of some migrants. Rep. Dean called-in to Merion West‘s Erich Prince from the airport after touring the Texas locations and described her observations. Below, she comments on facility guards discouraging members of Congress from bringing cell phones with them during the tour, a detained migrant suggesting that she had been told to drink water from a toilet, and sleeping conditions for some migrants that were far from desirable. On July 2nd, Rep. Dean and her congressional colleagues continued their tour, visiting a center in Homestead, Florida, a location that had also been visited by a number of 2020 Democratic presidential hopefuls. Below is Rep. Dean’s conversation with Erich Prince.

Congresswoman, how are you?

I’m doing well, thank you. How are you?

Nice to hear from you again. How has your trip been going? I’ve seen some of the tweets coming through about some concerning things you’ve seen.

Very, very troubling. I think we expected to see very troubling things, but nothing really prepares you for it. I can talk to you about where I just was, which is Clint. And Clint had the fewest number of people being detained. But what was stunning was as we pulled in, it was about 110 degrees. And before we were able to tour any part of the facility, they gave us sort of an opening set of statement, telling us that there were 25 children currently in their custody, whom we would eventually see. But when I asked about the census, I said, “You had 350 children here, a facility that was not prepared for children.” And he said, “No, no. Two and a half weeks ago, we had 250.” And I said, “What was your all-time high? What was the highest number of children being held at this facility?” And I was staggered—we were all staggered to learn—that two and a half months ago, according to the man in charge, they had 700 children there. 700 children.

They were beyond capacity. Number one, they were well beyond capacity with one child—this is an adult facility. Was an adult facility. They took us out to a third building, which on the board was called “the barn.” And I said, “When did you start using this facility?” He said, “When the census hit 500. I knew we had to do something else.” So they quickly scurried and outfitted it. I said, “Is this licensed?” He said, “No, it’s not licensed. We had to do something.”

They scurried; they got their cleaning company to expand their contract. At the high—I think he said—180 children out in the barn portion. We also saw tents; they were out on the yards. The tents are now empty; the tents held children. The tents had an air conditioning system [with] large tubes. It’s just a very darkened tent. And then, as we walked, we saw children in three holding cells. One was a larger holding cell brightly lit with children on cots. Boys, it’s a room of boys on cots. They were maybe 12 years of age, all sleeping. This was mid-day, all sleeping under blankets. They called these cells “refrigerators.” The only good news is they had cots. Then we walked past another room, where we made conversations through very heavy door and glass with little children, maybe six, little children. I wrote a little hand-written note, and I said, “We ‘heart’ you.” You know, we love you. And they smiled back at us. One of the older girls in the group; by “older” I mean 13 maybe, slid a note under the door. We explained who we were, members of Congress. Those who spoke Spanish explained who we were; we were here to help them. They slid a note—children—slid a note under the door and said, “How can we help you?”

Yes. And there was another little room with another set of children—very, very sweet. They said there were 25; I think it might’ve been slightly more than that. We went out and saw the showering facility—there were three showers. There were seven porta-potties. There was no play area outside or shaded area that we could tell. Actually there was one tent out by the barn that looked like something out of Desert Storm. I don’t know if children at one time had a chance to go out there. I don’t know how you could, humanely.

What was the temperature like inside? You said more than 100 degrees outside—how about inside?

In the car we saw, as we were driving in, 108, 109, 110, somewhere in that range. Inside the structure facility, it was well air-conditioned. Inside the tented area that was empty, they had just turned the air conditioning on, but it was empty. So feasibly, they could get that thing cool down a little bit. It was a semicircle, darkened tent. Very strange. And then inside the barn, it was quite hot. You know, doors were open. In there, I think there were no more than five adults. They claimed they were all picked up since last night and would not remain there until tomorrow. So they would move them out to El Paso Station, where we saw the adults that we had the chance to talk with. That’s Clint.

I saw a tweet go out a little while ago from you about some hostility from the guards. Could you describe that?

The guards had told us in the pre-meeting before we went into facility at El Paso Station One that we should not bring any electronics with us. We should leave them in the room or with staff. And interestingly, the retiring, resigning director was with us: John Sanders. He didn’t right away in the pre-briefing speak up. The ProPublica article revealed the 9,500 Facebook members with their grotesque posts. So [we said we wanted to] ask about that, which of course I think they should probably have started with. They have immediately started an internal investigation, and [he said], “certainly not any members of management.” I don’t know how he knows that, since they’ve just started the investigation. So it was hostile. We were very unhappy with that. We worried about our own security since you saw from the reporting that they have some taunts of maybe they throw things at members of Congress.

Women members, grotesque images. Obviously people of color—and, of course, the cruel, inhumane treatment of migrants in their custody. To talk about 16-year-old dead boy in their custody as, “Oh well, I guess he died.”

And also that photo of the father and daughter who had drowned in the river.

I don’t remember what their comment was on that.

So anyway, the guards—they were far from welcoming in your view to the members of Congress visiting?

They believed they were welcoming. They really did. The tune changed—I will say—because we were so warned that we should not be taking any pictures. And they said that “In the interest of time, you may not speak to any of the detainees.” And Representative Castro stood right up and said, “We’re members of Congress here to investigate. Of course we should be able to speak to detainees: adults.” I understand rules against speaking to children other than ,“Hi, how are you?” But we should, of course, be able to speak. We walked into a glass guarded area with many, many guards. So I was in the elevated glass area and then down on the floor that would have been perimeter of the cells. And as we walked in, a female guard, on the floor, through the glass, took a selfie of herself with Representative Alexandria Ocasio-Cortez, which Alexandria caught. And she went right out. She said, “You told us not to take pictures. And your staff are taking pictures of us?”

So with that, we all wound up going out. And she walked up to a doorway where 15 women were being held in one cell. And we opened it up, and we went inside. The guards did not have any intention of us doing that. I bet we were in there 20, 30 minutes talking to the 15 women held there. Turns out they were just moved there this morning. They had been out of the tents. I told you, when we drove in, it was 108 degrees. They were moved this morning to this holding cell where if all 15 of them lying down, there would be no extra floor space. And it had one prison toilet, stainless steel, without-a-seat toilet —with water in it. And when we tried the sink, there was no water in the sink. And the women said to us, “Oh yes, they told us the water in the toilet is clean enough to drink.” And they had been drinking out of the toilet. 15 of them in blue sleeping bags, sitting on the floor, lying on the floor, crying.

Several of them sick, two of them with epilepsy. One showed me and asked me to touch her back because she has a large bump on her back. She said the doctor said, “That needs a biopsy, but we can’t help you here.” Two were separated from their daughters. They don’t know where their daughters are. One daughter: 18; one daughter: 23. The eldest women in the 15-person cell was 58 years old. All she could do is cry and say “Where’s my daughter?”