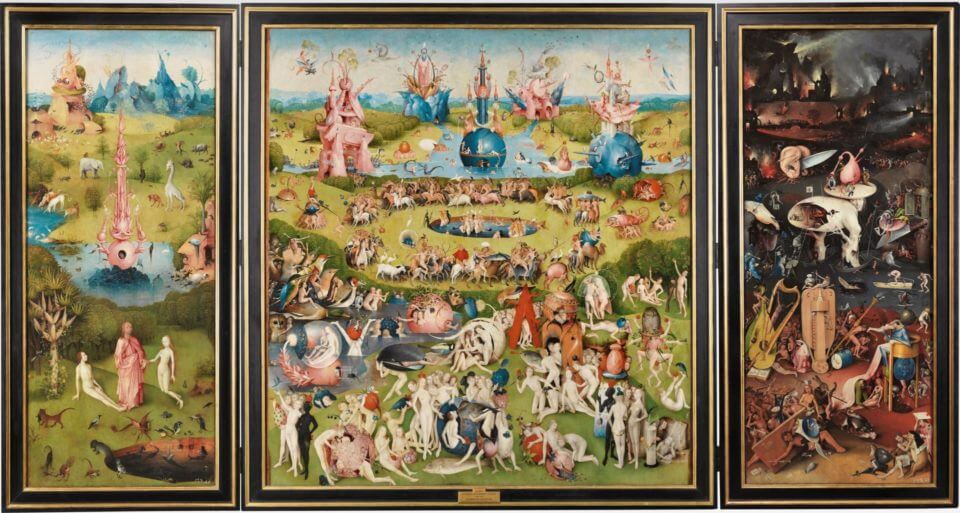 One of my earliest memories of an image painted by Hieronymus Bosch, the influential 15th century Dutch painter, was the paperback cover of Jerzy Kosinski’s novel The Painted Bird.  The cover consisted of a detail from the central panel of Bosch’s The Last Judgment: a hooded bird’s head on a blue man’s body on crutches striding purposefully, while carrying a basket on his back. Out of the basket pokes a young man’s head and a dark skinned demonic creature. I never felt much need to try to analyze or explicate this uncanny image; all I know is that it resonated with my reading of the novel, and it has resonated in some part of my mind ever since.

In more recent years, I find myself turning more and more to the imagery of Bosch and other artists from around his time, including Pieter Bruegel and Albrecht Dürer. There are probably many reasons for this, not the least of which is my own evolving understanding of the nature of modern society and modern thinking. Far from finding Christian imagery and mythology irrelevant, I find them increasingly relevant for understanding who we are—and how the modern world works.

In our “Age of Unbelief,” we like to think of our education and skepticism as a kind of prophylaxis against the dogmas of traditional belief systems, but, in recent years in particular, we frequently hear the language of religious conflict. When dealing with our own cultural conflicts, we find ourselves resorting to the language of our tortured Christian past: “heretic,” “orthodoxy,” “inquisition,”and “persecution,” as if we are reliving a past we have largely forgotten. Paradoxically, the more fervently we, secular humans, denounce our Christian heritage as superstition and dogma, the more we seem to be in its grip. Roberto Calasso, a great interpreter of the world’s great myths and religions, goes a step further:

“Secular society is the one that turns out to be less secular than any other, because secularity, as soon as it extends to everything, assumes within itself those hallucinatory, phantasmal, and delirious characteristics [found] in religions in general.”

Among the questions I ask myself are:  What are the “hallucinatory, phantasmal and delirious characteristics” of our world?  What does our Garden of Earthly Delights look like?

A work of art is, at best, the most transcendent and powerful kind of interpretation.  A great work of art reminds us not only of who we are but who we can become.

Human beings always live in some relationship to the world around them. We interpret our experiences, and we live by a vast and infinitely complex set of interpretations, the vast majority of which we are completely unaware of. These interpretations provide a kind of order and stability to the world.

We exist in a universe of conflicting forces of which we are merely one more force. We respond and adapt to these forces, that is to say, we interpret reality in order to live at all. All of our interpretations, our ideas, images, concepts and language itself originate as poetic events. Wallace Stevens describes the nature of our poetic existence:

Acknowledged or not, we live and will continue to live in a poetic landscape. Stevens continues:

“…what makes the poet the potent figure he is, or was, or ought, to be, is that he creates the world to which we turn incessantly and without knowing it and that he gives to life the supreme fictions without which we are unable to conceive of it.”

We always live by some set of “supreme fictions,”some set of images, concepts, and ideas which structure our reality. Any civilization or culture is itself a vast dynamic interpretation or, we could even say, a vast dynamic work of art.

Stevens understood quite well that the role of the artist and the poet had become problematic in the modern world, but the most powerful of artists and poets do not shrink from extending their powers.  Even in our Age of Unbelief, Stevens contends that the poet’s “function” is to express, “that spiritual nobility which is our spiritual height and depth.”

We modern secular humans pride ourselves precisely on our unbelief, and we may pronounce, not only “the Death of God,” but “the End of Metaphysics,” “the End of Metanarratives,” or even “the End of Art.” However, a great poet or artist is not concerned with such restrictions; a great poet or artist begins anew. He or she understands himself or herself to be a force of nature and exalts in embracing all of experiential reality. The fearless Walt Whitman wrote:

The first I graft and increase upon myself…the latter I translate into a new tongue.”

Bosch, too, embraces the range of experiential reality from Heaven to Hell. It’s not a coincidence that the outer panels of his Garden of Earthly Delights are entitled “The Creation of the World”; they depict a giant transparent globe surrounding a strange earthly landscape. Bosch seems to be asking and answering the same kind of questions which the greatest poets, artists and visionaries have asked for millennia: “Do you know what the world is to me?  Shall I show it to you in my mirror?…” Open the outer panels, and Bosch shows us his world.

Bosch’s work is replete with the Christian imagery and symbolism of his day; it shimmers with inherited meaning. To ask whether Bosch literally believed or didn’t believe in Christian dogma is wholly beside the point. The Garden of Earthly Delights is a poetic vision of reality; Bosch re–presents Christian imagery and all kinds of imagery from his day in a wholly new and provocative way. For me (and apparently for many others) it resonates; it embodies the qualities which St. Thomas Aquinas called integritas, consonantia, claritas, which James Joyce explicates at length as, “wholeness, harmony and radiance.” The work transcends all interpretation; it transcends belief and unbelief.   Regardless of centuries of analysis, explanation or even dismissal or debunking, Bosch’s work lives.

And, no doubt, will continue to live. The work lives in the mind of the viewer, which is to say, the work has a capacity to enliven and empower other human beings. This is what I understand by Eugenio Montale’s “second life of art,” and Stevens repeatedly notes the “role” of the artist is “to help people live their lives.” A great work of art may make visible what was once invisible; it may generate new associations and relationships, which facilitate our adaptations to the changing reality in which we find ourselves. A great work of art always embodies a kind of knowledge.

A work of art transcends all attempts to reduce it to something less than itself. Yet reduced it will be. If, as I’m claiming, all our ideas, images, words and such originate as poetic acts, their poetic nature is often lost over time. This is why Emerson claimed all language tends to become, “fossil poetry.” So a work of art resonates or it is ignored or it is interpreted into something less than it is. Even this second life of art usually and inevitably devolves over time toward a more diminished kind of interpretation—a vulgarization, a simplification, an orthodoxy, a morality etc. or, in Joyce’s terms, a work of art may come to serve a “didactic” function.  A second life becomes a half-life so to speak. What may begin as “poetic tales” end as “mental deities.”

As we forget the original poetic nature of all interpretations, we begin to confuse our interpretations for reality itself: “What is now proved” says one of William Blake’s “Proverbs of Hell,” “was once only imagin’d.”As William Blake eloquently observes, the forgetting of our own poetic nature is what empowers “the priesthood,” the priest being the master of the interpretation. The priest dismisses or disregards the involvement of the creative energy of the poet in the interpretation: “And at length they pronounc’d that the gods had ordered such things. Thus men forgot that All deities reside in the human breast.”

The domination of the priestly aspect in all of us is the temptation to merely live in the comfort and security of some particular interpretation, some series of conventions or formulas, some series of beliefs . . . or unbeliefs. Life, however, is paradoxical; we are simultaneously energy and form, simultaneously poet and priest. The radically problematic nature of art is emblematic of the radically problematic nature of living.

The priest, the protector or master of the interpretation, takes many forms; today he or she most often appears in the form of the anti-priest (as we might expect in an Age of Unbelief). Our new anti-priests do not neutralize the power of a great work of art by exalting a single interpretation as was the role of the traditional priest. Rather, our new priests neutralize the power of a work of art by insisting that it consists of only interpretations. They teach us that a work of art, just like everything else, is merely an expression of its social and historical conditioning. Today, if we are to believe our priesthood of educators and theorists, it’s all been demystified; it’s all interpretation; it’s nothing but interpretation.

When the transcendent power of a unique work of art is denied, the possibility of empowerment of the individual and the possibility of a new unifying vision are subverted. Again, the priest tries to control or neutralize individual creative energy. Again, the priest is about power and control. Again, the flock is weakened and tamed, only this time, not by guilt or intimidation, but by mere flattery; we are all artists, everything is art, anything is art. Who, after all, is to say otherwise? And so our modern priestly world of fragmentation is preserved: art as everything and anything becomes indistinguishable from art as nothing.

The conflict between the priests and the poets is eternal. As the interpretations we live by become stale and sclerotic, the poet/prophet, as William Blake suggests, will emerge and the stifling authority of the priests will be challenged. No doubt the foolish will proliferate along with the wise, but, “[I]f others had not been foolish,” says Blake, “we would be so.” A work of art lives and generates new life —or not.

Chris Augusta is an artist living in Maine.