St. Peter and St. Paul: A “Bromance” That Never Was 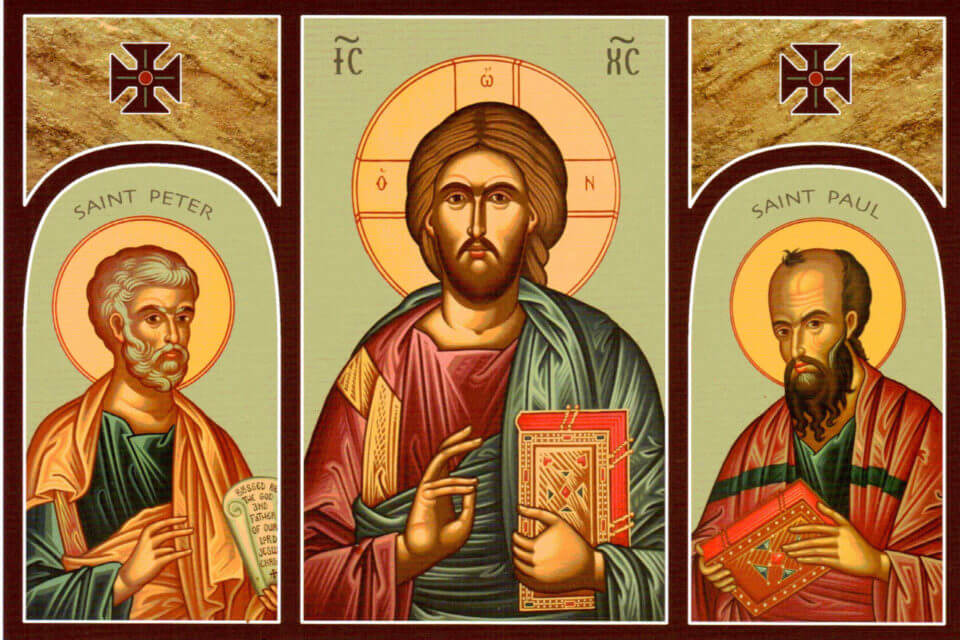 “Yet, Christianity is a more complicated religion, because in its traditions, fact and fiction intermingle, and it is not always  easy to determine which is which.”

June 29th will mark an important celebration in Christendom: the feast of Saints Peter and Paul. Novelists, poets, painters and filmmakers are fully aware of how captivating stories of bromance can be—Batman and Robin, Asterix and Obelix, Starsky and Hutch, Obama and Biden, and so on. These duos may have rough times and strained relationships at various points, but eventually, they happily reconcile and join efforts to do something great, each one in his own capacity. Naturally enough, this is the way Christianity envisions the relationship between Peter and Paul. As imagined by countless painters, Peter has the keys, and Paul has the sword. Peter is a simple fisherman; Paul is a sophisticated urbanite. But ultimately, they complement each other, all in the happy service of the faith.

Actually, no. Peter and Paul’s relationship was probably far more tumultuous. And, from the very moment that the deeds of both characters were narrated in the biblical book of Acts, there has been an attempt to dissimulate the strains and to come up with some form of a PR campaign in order to present a happy Church that was consolidated from the beginning, with no divisions affecting its integrity.

Paul, an apostle that never met Jesus, went to meet Peter and James (Jesus’ brother) on a first visit to Jerusalem. One may presume that Peter and James did not trust this mysterious man, who suddenly, proclaims himself as an apostle. Jesus’ followers, who were Jews, lived by Moses’ Law. But Paul had the idea that Jesus’ message must reach the Gentiles, and that the Gentiles must not submit to circumcision and other tortuous Jewish rituals.

This must have caused some offense to the original followers of Jesus, for their master had clearly said that he had not come to abolish the Law, but rather, to fulfill it. Apparently, Paul sought to resolve this issue in Jerusalem and thus went to meet the original leaders of the movement, Peter and James. Consequently, they met, and apparently reached an agreement that was sealed with a handshake: the Gentiles would be accepted. Peter and James would preach to the Jews, and Paul would preach to the Gentiles. Both Paul in his own account of Galatians 2, as well as Acts’ account in chapter 15, confirm this version.

Yet, later on, Paul narrates something that is astonishing. In that same chapter 2 of Galatians, Paul says that, while being in Antioch, Peter ate with Gentiles. But, when delegates sent by James arrived, Peter distanced himself from the Gentiles, fearing James’ delegates. Upon seeing that behavior, Paul publicly reprehended Peter.

How on Earth did this happen? From the gospels’ account, we know that Peter was somewhat weak in character (surely not everything that is detailed about Peter in the gospels is true, but they do present an accurate appraisal of his personality). At first, Peter would have had no problem accepting the terms of the original meeting in Jerusalem. But then, when the more hardcore Jewish delegates sent by James arrive in Antioch, Peter changes his mind.

My guess is that, at that meeting in Jerusalem, James was not very serious. It must not have been a very formal gathering (today, Church tradition calls it the “Council of Jerusalem,” but I figure it was just a few guys sitting under the shade of a tree talking informally), and whatever agreement was reached, was only confirmed by a mere handshake. Maybe James just went along with Paul’s enthusiasm of preaching to the Gentiles, but he did not really have the intent to commit to it. After all, at the time of the meeting, there was a massive famine in Jerusalem, and apparently one of the terms of the agreement would be that Paul could preach to the Gentiles, as long as he would help out the poor brethren of Jerusalem. Paul himself confirms this in Galatians 2:10. In other words, it seems to me that James was willing to tolerate Paul’s eccentric plan but only with the intention of getting Paul to provide monetary relief for the impoverished people of Judea.

One may understand James’ approach. Perhaps out of concern for his Judean brethren, James was willing to engage in this kind of scam. Or perhaps James and Paul misunderstood each other in that meeting, and they seemed to agree on something when, in fact, they did not. This is rather common in human interactions.

After that confrontation in Antioch, it seems that Paul was never again on happy terms with either Peter or James. Acts narrates that, in Paul’s final visit to Jerusalem, James, ever mindful of Moses’ Law, exhorted Paul to embrace a Nazarite vow in the Temple. In the midst of some confusion, some Jews tried to kill Paul, and Roman soldiers rescued him. Strangely, James did not do anything to help Paul. Again, my guess is that neither James nor Peter (who by that time had already left Jerusalem) thought much of Paul; maybe they would not have minded if he were arrested and taken away.

The book of Acts tries to solve this quarrel and presents Paul, Peter and James as great friends that, at the end of the day, solved these minor conflicts. Acts very conveniently omits any reference to the heated exchange of words in Antioch. In fact, Acts presents the narrative as if Peter was from the very start willing to preach to Gentiles (the Roman Centurion Cornelius would have been his first convert), as if there had never been a big dispute on this issue. Clearly, as scholars know all-too-well, whoever wrote Acts had an ax to grind. A major point in this author’s agenda was to present the early Christian movement as one unified family. We should know better: in a variety of Paul’s authentic writings (especially Corinthians 2), he is extremely resentful against what appears to be James’ leadership, and this beef never came to a happy resolution.

After Acts’ initial attempt at spin doctoring, later Christian tradition tried to expand the Peter and Paul bromance even further. By the late 2nd Century AD, the city of Rome was beginning to displace in ecclesial importance the other great centers of Christianity (Antioch, Alexandria, Jerusalem), and thus, the bromance of Peter and Paul was taken as a trope to highlight Rome’s central place. Around that time, Irenaeus of Lyon was claiming that Peter and Paul were the founders of the Church in “the eternal city.” Ever since, Christian imagination has been very fecund in picturing the two buddies coming together to convert the Gentiles in the empire’s capital and eventually suffering together Nero’s persecution.

Peter may or may not have ended up in Rome. The only real source that attests to this is Clement, a Christian author who wrote in the 90’s. The tradition that he was martyred seems to have some plausibility, as it is somewhat hinted at the end of the gospel of John, and is also attested by the apocryphal Acts of Peter (though, as with pretty much all apocryphal Christian texts, its historical reliability as a whole is scarce). As for Paul, Acts also narrates that he wound up in Rome, though it makes no mention of martyrdom. Clement does hint that, like Peter, Paul was martyred, and this is confirmed by additional later Christian authors, such as Ignatius of Antioch.

So, at least in that regard, Christian tradition may have had it right. But Peter and Paul were certainly not the founders of the Christian Church in Rome (there were already Christians there when Paul wrote a letter to them, before he ever went to Rome for the first time). It would even seem Peter and Paul did not really interact in Rome at all. When Paul wrote to the Romans, he sent greetings to many people but never mentioned Peter. This would indicate that either Peter was never there, or perhaps more likely, that Paul did not care about Peter, and a unified leadership of the Christian community in Rome came much later. In fact, we know from other pieces of evidence (most notably a text known as the Shepherd of Hermas), that as late as the mid-2nd Century AD, there were multiple bishops in Rome.

Unlike the cults of paganism that it eventually came to replace, Christianity prides itself on being based on real stories, with real characters. Indeed, as opposed to, say, Achilles and Patroclus (this pair actually being homoerotic, not just bromantic), of whom we can never be sure that they even existed, we are on firmer historical ground with Peter and Paul. Yet, Christianity is a more complicated religion, because in its traditions, fact and fiction intermingle, and it is not always  easy to determine which is which. At least for the case of Peter and Paul, we know that despite the magnificent El Greco paintings and the gorgeous churches built in their name, this is a bromance that never was.

One thought on “St. Peter and St. Paul: A “Bromance” That Never Was”