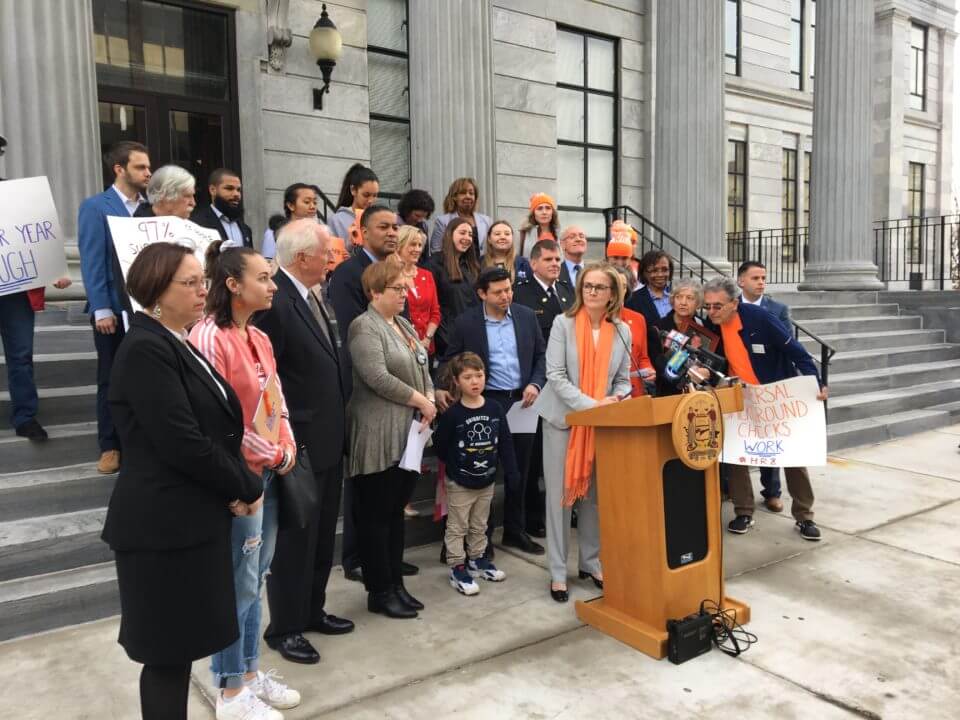 “It’s hard to point to me as an anti-gun person. I’ve got a gun safe full of them! Every year, when we have the competition for skeet, trap, and sporting clays, Democrats vs. Republicans, I always walk away with the trophy.”

On the morning of March 15th, Rep. Madeleine Dean (D-Pa.) and Rep. Mike Thompson (D-Ca.) spoke in Montgomery County, Pennsylvania on the issue of gun violence. They began the morning by addressing a student town hall at Norristown High School before giving a joint press conference on the case for background checks. At their press conference at Montgomery County Courthouse, the two members of Congress were joined by a number of state legislators and local activists, including a mother and daughter who became involved in the issue after a member of their family committed suicide with a firearm. The event Friday morning came in the wake of the House of Representatives’ passage of H.R. – 8 Bipartisan Background Checks Act of 2019, which was sponsored by Rep. Thompson.

Merion West editor Erich Prince spoke with Rep. Dean and Rep. Thompson for brief one-on-one interviews after the event. Below are their conversations:

Congresswoman Dean, there was some discussion in the remarks today about the role of young people in this gun reform movement, such as David Hogg, who became active after the Parkland shooting. Obviously, you chose a school for your venue earlier this morning to discuss these topics. What do you see as the role these younger generations play in leading this effort?

Literally, that is the role: young people are leading this effort. You know, I thought after Sandy Hook, when we saw babies slaughtered in their First and Second Grade classrooms, that that would be enough to tap into our common humanity and say, “Enough is enough.” We found that it wasn’t, but Parkland changed things. And it’s the young, bright people who, within hours, came out and said, “We’re going to make a difference.” And they’ve stayed with it: they’ve been down in D.C.; they’re all over. Obviously, other high school students have followed [the Parkland students’] lead. I’m absolutely convinced that young people are making a difference and changed the face of [the 2018 midterm election] and helped put people like me in office. That’s what we’re trying to say today at Norristown Area High School: “You guys are the lead on this. We are inspired by you. We have been maddened by the fact that adults have not taken the lead, that elected members of the Congress and Senate have failed the students. The role of the students is absolutely paramount.”

What do you see as the future of this movement as a bipartisan issue? We know there was discussion today about Senator Toomey, and he and Senator Manchin had the Manchin-Toomey amendment in 2013. Something like 74% of NRA members support this, and the general public polls vary on this, but it’s somewhere in the 90’s. Why do you think there has been such unified Republican opposition in Congress when the public opinion is as it is?

I don’t know. I think they’re lacking in insight; they’re lacking in courage. But I will say this: H.R. 8 passed with some Republican support—I think it was eight [Republicans who voted for it]. So, I look to them to bring along their other colleagues on their side of the aisle and, I also hope, in the Senate. I hope that they go door-to-door in the Senate to make sure that they bring it up to both Republicans and Democrats. We know we have Democratic support. We have to confirm and get Republican support. And that’s where the two things fall in place: the young people telling the senators, “Be counted. Take your vote, and we will see if you’re actually representing us.” They need to step out of the shadow of fear of the NRA and moneyed lobbyists and say, “You know what, I agree. I have a role to play.”

I know Congressman Fitzpatrick of Pennsylvania was one of those Republicans. Perhaps there is some potential for him to bring other Republicans on board.

Absolutely. I think it’s our obligation to bring others on board and say, “This is not in any way a threat to your Second Amendment rights. This is actually about saving lives.”

Thank you for being here.

Congressman, I’d like to ask how you feel the political climate has changed since you first entered the House in 1999 in regards to openness to taking up gun issues?

Well, it’s changed considerably. It’s been 26 years since a piece of gun violence prevention legislation has passed out of the Judiciary Committee. That’s huge. And it comes about because obviously we have different members within Congress now—but more importantly it’s a different community across the country. There are more people interested in this. The will of the people is shifting. The student activists are incredibly important, and we have constituency groups such as Moms Demand Action, Giffords, Everytown. There’s a lot of pressure out there. People want reasonable gun reform.

I understand that only two Democrats voted against this bill. For Democrats coming from more Republican-leaning or moderate districts, especially those just elected in 2018, is this something they struggled with a bit, or were they on board with this? I know a lot of newly elected Democrats are coming from districts that are R+2, R+3 and might lean a bit more conservatively.

As you know, I’ve been working this [for an extended time]; this has been my goal for the last six-and-a-half years. I was surprised we didn’t lose more Democrats. So, that was a real indicator to me that the voice of the people is being heard.

I think it’s playing a pretty significant role. It’s hard to point to me as an anti-gun person. I’ve got a gun safe full of them! Every year, when we have the competition for skeet, trap, and sporting clays, Democrats vs. Republicans, I always walk away with the trophy. I carried [a gun] in combat in Vietnam. So, I think it’s helped, and it’s given people cover. You know, “If Mike can do it, I can do it”

Thank you for your time, Congressman.