The American Left needs to spend less time hitting the pavements criticizing government and institutions outright. Instead, they must do the less glamorous: study the policies that best help working people and then go to the polls and vote that way.

A worrying realization washed over me, sitting in a graduate seminar on prison justice activism in 2016. This happened as the PowerPoint slide transitioned to an obscure meme featuring two screenshots of Canadian rapper Drake taken from his music video for “Hotline Bling.” The first screenshot showed Drake appearing to gesture his disapproval. The second shot showed his approval. One of the instructors proudly proclaimed that the approach we would be taking in the seminar was exemplified by this meme. Everything was to be one way or the other. 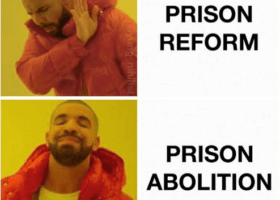 As the semester progressed, it became clear that one of the course’s main takeaways was that arguments for prison reform are often just veiled attempts at preserving the status quo. Thus, to argue that we should reform within the system is to betray authentic radical politics. Moreover, endorsing prison reform means you are endorsing some parts of an inherently unjust system. Thus, prison abolition is the only morally viable path.

My classmates nodded enthusiastically. But I was counting the reasons why this was the wrong conclusion. To be sure, when it comes to the criminal justice system—especially as it exists in North America—I think there is little to suggest that it makes our communities safer. And it certainly does not make our society more cohesive. In fact, it seems to do the opposite; it tends to perpetuate criminality and socio-economic inequality. But to say that there should be no mechanism available to remove people from society, under any circumstances, seemed like an odd conclusion. There are alternatives to how we do prison in North America that still allow for the possibility of incarceration. For example, Norway has pioneered some techniques that seem to be working.

More importantly, it simply doesn’t follow that to endorse one part of an institution (and consider reforming it) is equivalent to morally endorsing all of it. Recently, in response to U.S. President Donald Trump’s draconian border security measures, ‘abolish ICE’ (Immigration and Customs Enforcement) has become a popular rallying cry among leftist groups in the United States. This is the same type of thinking. It is this way of thinking, what I refer to as ‘purity politics’, that I discuss in this article.

The Problem with Purity Politics

Compromise is morally unacceptable—this seems to be the gist of leftist purity politics. I would argue that this attitude is, in part, a consequence of the ever-growing critical academic scholarship, such as critical race theory, post-colonial theory, and gender studies, among many others. Unlike other recent critics of left-wing identity politics, I do not dismiss these approaches to scholarship writ large; instead, I think they are exploring worthwhile questions. No doubt, there is something to the idea that the logic of Western modernity is, at least in some way, influenced by the history of colonialism, racism, and sexism. Broadly speaking, this is useful inasmuch as a society should make strides to come to terms with its history—and to remember how moral evolution happens.

The problem I do see, however, is that this scholarship leads us towards a reductionist social ontology of guilt and victimization—by universalizing a kind of moral complicity. To clarify what I mean, consider the basic idea (and oft-repeated in ‘critical discourse’) that Western liberalism is irreparably tainted by the very real history of colonialism, racism, and sexism. Therefore, to endorse Western liberalism makes you effectively guilty of complicity with colonialism, racism, and sexism.

One obvious problem with this kind of argument is that it commits the fallacy of division. That is, it is a mistake in logic to think that because the whole (liberalism) is historically associated with, for example, colonialism, all of its parts (people, ideas, etc.) are equally associated with colonialism. This should even be fairly obvious to most who hold ‘critical’ views since—when pressed—most will admit that they support some form of liberal rights (individual, and equal rights). Thus, it can’t all be so bad, after all.

I bring this all up because of a connection I want to make between purity politics and the way 21st-century social movements that have been evolving. Zayneb Tufecki’s powerful analysis of social movements, Twitter and Teargas, is useful in this respect. As Tufekci observes, in response to the perceived injustices of the current political dispensation, recent social movements including, for example, Occupy Wallstreet, have completely given up on the legitimacy of liberal democracy—and all forms of hierarchy for that matter. Instead, they tend to emphasize, “participation, horizontalism, institutional distrust, ad hoc organizations.” Their belief in the irredeemability of liberal modernity has led many recent leftist activists to believe that: “… representative democracy has failed, captured by corporate powers and elites. Protestors, therefore, distrust delegates and leaders and instead desire direct participation. Modernity and the rise of the individual come with a sense of loss of community.”

Thus, the only way forward is something that transcends all the moral impurity of Western modernity. One of Tufekci’s most important observations is that the quest to completely overcome the evils of hierarchy has made recent social movements a lot less effective. As she explains it:

“The lack of decision-making structures, mechanisms for collective action, and norms within the antiauthoritarian, mostly left-wing networked movements… often results in a tactical freeze in which these new movements are unable to develop and agree on new paths to take… [T]hey lack mechanisms for making decisions in the face of inevitable disagreements among participants.”

I would argue that this is part and parcel of a politics concerned with purifying itself of all possible injustice. In this case, hierarchy is seen as the injustice to overcome. Unfortunately, moral and political purity incurs a heavy cost: effective action. Precisely because every aspect of hierarchy is seen to be morally tainted, it makes contemporary activists unwilling (or unable) to make alliances with politicians or political parties. This, as I will argue, has strikingly negative consequences on the prospects for meaningful progressive change.

My political orientation for left-wing policy shapes much of my present frustration with the way purity politics has begun to dominate many left-wing activist movements. Specifically, I am frustrated by the obvious way in which right-wing social movements have been far more effective at fostering substantive policy change. Consider the Tea Party Movement, which, like Occupy, was organized in a rather ad-hoc fashion, employed street protests, and social media mobilization. Unlike Occupy, however, it was primarily concerned with electoral capacity. Indeed, as Tufecki points out, Tea Party protesters, “wanted policymakers to represent them, and they intervened heavily in the electoral process.” Their efforts led to the election of around sixty members of Congress, ultimately having damaging effects on the prospects for progressive politics in the United States.

It seems like those involved in left-wing purity politics have forgotten about the profound consequences electoral capacity can have. As faith in liberal democracy and electoral politics flounders, the threat politicians face for not acting on progressive issues is reduced, and the sway of corporate influence increases. Moreover, the segments of the population that stop voting (partially influenced by purity politics—and the lack of mobilization) are the ones most likely to suffer. As Tufecki observes, the effects are obvious when we compare funding for social programs in the United States:

“Programs like Medicare, which provides health care for the elderly, are relatively generously funded while higher education, a benefit for young people, suffer from deep funding cuts. Politicians who say that they prefer funding cuts, in general, will rarely advocate cutting funds from the elderly. Politicians know that the elderly are very likely to vote and to punish leaders for cutting their benefits, while young people are less likely to act collectively… [in ways] that carry electoral threat.”

As much as electoral politics have been co-opted by corporate and special interests, it has been allowed to happen because the people who oppose this don’t make it the polls. They’re too discouraged by the system to participate in it. So, in part, it becomes a self-inflicted wound. I strongly condemn the idea that electoral politics are somehow morally illegitimate or ineffective. In fact, electoral politics can and have been used to further all kinds of progressive interests. Rather than fleeing to the moral high-ground of purity, we must remember that real potential for change exists in liberal institutions. The Left just needs to remember how to use them.

The appeal of purity politics is easy enough to understand. What could be more effectively satisfying and ecstatic than righteously hitting the streets with a hoard of like-minded people, sharing in a collective anger and disgust at the current conditions of injustice? Tufecki is right to notice that the, “rise of the protest or the occupation itself [has become] a cultural goal – a life-affirming space” in its own right. There’s a way in which the very act of mobilization itself—and not the purported outcome—is what seems to motivate many of those involved.

In contrast, there is nothing effectively ecstatic about learning what the implications might be for the United States to leave NAFTA—or the way regulatory capture leads to certain kinds of industry monopolies, ultimately hurting working people. But guess what? That’s what progressive activists should be paying attention to. Rather than dwelling in the ecstasy of protesting broadly construed systemic grievances (white supremacy, colonialism), activists should do the work of learning how concrete policies are actually affecting socio-economically disadvantaged populations and transform this knowledge into electoral mobilization. Instead of gesturing to some vaguely defined morally pure collective future, activists should be open to compromise and reform. Historically, this has led to the growth of progressive programs. During the United States Civil Rights movement, activists both fought against—and worked with—elected officials and government institutions to foster change. Philosopher Richard Rorty was right when he said that:

“America is not a morally pure country. No country ever has been or ever will be. Nor will any country ever have a morally pure, homogenous left. In democratic countries you get things done by compromising your principles in order to form alliances with groups whom you have grave doubts.”

If progressivism is to move forward, the contemporary leftist obsession with moral purity and the emotionally-ecstatic moments of protest must end. Even if there is nothing ecstatic about getting a nuanced understanding of how concrete policies affect everyday people, that’s what we need right now.

Victor Bruzzone is a PhD student in the Department of Political Science at the University of Toronto where he focuses on political theory and public policy. He also holds graduate degrees in philosophy and urban planning.