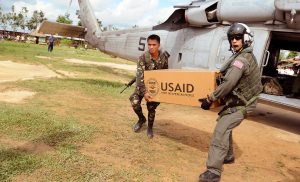 Foreign aid has lifted millions of people out of poverty and tremendously improved diplomatic relations around the world.

There seems to be a constant debate in the United States over our federal budget and what are leaders are doing to “fix it.” This polemic has only intensified during the Trump presidency, as he vehemently promises to cut government spending with his proposed budget. This marks what will be a defining moment in history, and it is important to understand where our tax dollars are really being used.

Aside from defense, healthcare, and education, one of the most talked-about spending areas is foreign aid. Right after World War II, the Marshall Plan and President Harry Truman’s Point Four Program kick-started the United States’ commitment to foreign aid and laid the foundation for our modern foreign assistance system. Foreign aid spending is a highly divisive issue that has continued to cut across party lines since these beginnings in the mid-1940s.

Proponents of U.S. aid spending argue that as a world leader, we have a responsibility to share our prosperity with countries still in the process of development. They claim that development, stimulated by foreign aid, will eventually benefit the entire world and therefore it is necessary to invest in foreign infrastructure, healthcare, and education. Those against foreign aid spending argue that it is ineffective – it causes these countries to become dependent on our money, and in turn, hinders development.

While both camps have their merits, the bottom line is that our actual spending on foreign aid is an extremely small part of our overall budget. This is part of a huge misconception among Americans today—a 2015 Kaiser Family Foundation poll found that the amount spent on foreign aid is grossly overestimated. On average, Americans think that foreign aid spending makes up 31%, or almost one-third, of our total federal budget. In reality, the United States spends a mere 1.3% of its budget on foreign aid – about $50 billion in 2015. Furthermore, this sum is not just given out in hard cash to foreign governments and NGOs. U.S. aid is doled out in numerous different forms:

American foreign assistance is funded and executed by over 20 government agencies, with the majority of money used by the U.S. Agency for International Development (USAID) and the U.S. Department of State. While each government agency focuses on some specific aspect of international aid, trends point to four major categories of assistance in recent years. According to the Congressional Research Service, 38% of foreign aid spending in the 2015 fiscal year was dedicated to long-term development, 35% to military and security, 16% to humanitarian aid, and 11% to political aid. These four broad areas are officially divided into nine classifications and 52 precise sectors after that.

The question looms: where exactly are Americans’ tax dollars going? At the very beginning of mass U.S. foreign assistance with the Marshall Plan, this money went to rebuild Europe and help stop the spread of communism. Nearly 60 years later, after the 9/11 attacks, foreign assistance spending increased greatly – from $10 billion in 2000 to $27.5 billion in 2005 – and was used heavily in the Middle East with assistance to Iraq and Afghanistan. For the 2017 fiscal year, the most foreign assistance money has been pledged to sub-Saharan Africa and the Middle East, areas ravaged by extreme poverty and war. The top ten countries receiving the most aid in 2017 are Afghanistan, Israel, Egypt, Jordan, Pakistan, Kenya, Nigeria, Tanzania, Ethiopia, and Iraq. When looking specifically at military and security aid, Israel and Egypt top the list, receiving $3.1 billion and $1.3 billion respectively.

A major aspect of the U.S. foreign aid discussion is the comparison between U.S. aid and aid given by other developed countries. The U.S. has long been the leader in pure dollar amounts given abroad—in 2016, the top five donor countries were the U.S., Germany, the United Kingdom, Japan, and France. Although we give the most money in total volume, we are ranked 22nd in the world when we look at our aid as a percentage of our gross national income (GNI). Norway, Luxembourg, and Sweden top the list in aid given as a percentage of their GNI, coming in at 1.11%, 1.00%, and 0.94% respectively. In 2016, the United States’ aid only made up 0.18% of our GNI – but why does this figure matter?

The UN has set a target for developed countries’ foreign aid programs. Agreed upon in the 1970s, the goal for Official Development Assistance (ODA) as a percentage of GNI is 0.7%. Once again, U.S. foreign aid only makes up 0.18% of our GNI. We are the biggest international aid donor, yet are nowhere near the UN target for foreign aid. If the U.S. gave 0.7% of our 2016 GNI ($18.75 trillion) in international aid, it would have been $131.25 billion, more than twice the amount that was actually used for foreign aid.

The world has seen proven results in development and health thanks to U.S. foreign aid. For example, the top fifteen trading partners of the United States once received U.S. development or security aid. The number of people living on less than $1 a day has dropped by a quarter billion people since 1960, and global vaccination programs supported by U.S. funding have allowed for the near-complete eradication of diseases such as polio. Advocates for foreign aid assert, “[foreign aid] advances three fundamental U.S. interests: it keeps us safe, it meets a moral imperative, and it builds economic prosperity.”

By continuing our commitment to foreign aid, the U.S. can build stronger diplomatic relations, spread democracy, and promote free markets around the world. One can only imagine what amazing changes we would see if all developed countries were meeting targets for foreign aid, and as globalization continues to more deeply impact every corner of the world, it is quite probable that foreign aid will become a bigger priority in the budgets of many countries.