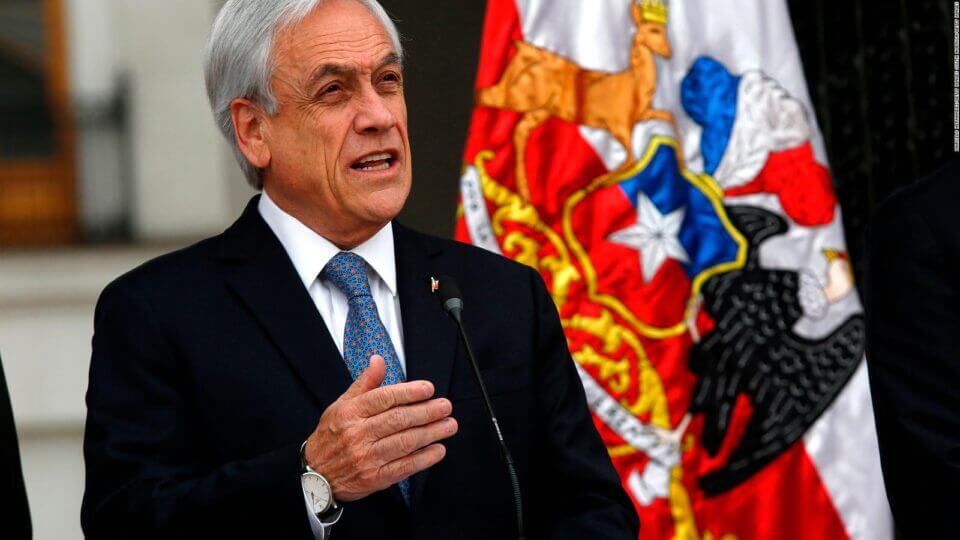 “Instead of protesting to usher in social democracy, citizens on the Left and Right in Chile should come together to protest the abhorrent corruption that has slithered its way into the political parties of the Chilean Right.”

Too many conversations surrounding the current political turmoil in Chile blindly fall in line with narratives espoused by the country’s far-left. Chile’s right-leaning current president, Sebastián Piñera, is often mischaracterized as a “radical” figure by mainstream outlets. But strong statements such as these actually take away from the debate we should be having: Is Chile’s true battle a war of ideologies or a call for government accountability?

In order to understand the Chilean people’s distrust of the current administration, one must be aware of the fact that President Piñera’s affiliation with the political Right is inseparable—in many minds—from Chile’s former military dictator, Augusto Pinochet, who governed Chile from 1973 to 1990. Pinochet took over the government via a coup after his left-wing predecessor, Salvador Allende, faced near-universal condemnation for his socialist economic policies—such as taking over banks, copper mines, foreign firms, and large estates—and his open allegiance with rogue communist countries such as North Korea. Despite vicious human rights abuses that would come as a result of Pinochet’s takeover—at least 3,200 people were either murdered or “disappeared”—the coup may have seemed tenable at the time of Allende’s government because so many Chileans had become disenchanted with Allende’s socialist policies, la vía chilena al socialismo (The Chilean Way to Socialism).

Even now, years after both presidencies, the enormous divide between the Chilean Right and Left still exists.

In recent years, with a bicameral legislative branch, executive, and judiciary that together constitute the representative democratic republic that was established towards the end of the Pinochet era, President Piñera was first elected president in 2010 and again in 2017. Both times, he ran on a platform emphasizing economic growth and pro-market policies. President Piñera, whether due to personal politics or to avoid associating himself with Pinochet, avoided running on a nationalist platform. Instead, his campaign centered on the economy.

However, any amount of goodwill following his re-election was short-lived, as protests broke out first in Santiago in October of 2019 in response to a price hike on Chile’s public transport system. This outcry resulted in a domino effect, leading to violent protests nationwide, in which many Chileans demanded the instituting of social democratic policies, along with constitutional changes.

It did not take long for President Piñera to respond. The Statesman reports that President Piñera replaced eight cabinet members in October of 2019 “amid ongoing anti-government protests in Chile.” The report hones in on President Piñera’s response to the disgruntled citizens, in which he publicly stated, “Our government has heard the loud and clear message of Chileans asking for…a more just country with solidarity, greater equal opportunity and less privilege.”

President Piñera’s swift decision to reshuffle his cabinet shares little resemblance to ostensibly similar moves by power-hungry politicians on the far-right. Even so, his numerous promises to deliver on affordable healthcare and higher pensions are reminiscent of centrism more than anything else. Often, when a head of state decides to change his cabinet members and push for broadly-supported policy changes, he is often thought to be reasonable and cooperative. This certainly has not been the case with President Piñera, who, in the aftermath of the protests, decided to make those precise changes in hopes of restoring peace to the Chilean streets.

Given the centrist nature of President Piñera’s promises, progressive Chileans are attacking the current administration for all the wrong reasons. Instead of protesting to usher in social democracy, citizens on the Left and Right in Chile should come together to protest the abhorrent corruption that has slithered its way into the political parties of the Chilean Right.

While many right-leaning individuals may agree with President Piñera’s personal politics, the Chilean president has, undoubtedly, made a number of terrible decisions since his reelection that are worthy of condemnation, from across the political spectrum. From the appointment of questionable individuals to his original cabinet to his failure to eradicate corruption in law enforcement, it is plain to see that Chile’s real battle is not so much about ideology as it is about purging the government of corrupt bureaucrats.

As a prime example, take President Piñera’s cabinet choice for the Ministry of Justice and Human Rights, Hernán Larraín. Under Pinochet, a secret enclave existed in which far-right Chileans and emigrant Nazi Germans would participate in unspeakable deeds—including acts of child abuse. This criminal organization was known as the Colonia Dignidad, and one of its leaders was a man named Paul Schäfer, a former Nazi colonel who is said to have abused at least 25 children at the time of the secret meetings. So imagine the twisted feeling Chilean citizens must have felt when Hernán Larraín, a well-known Chilean politician who defended Paul Schäfer and the Colonia Dignidad on camera, was appointed by President Piñera to be the Chilean Minister of Justice and Human Rights in 2018.

Without a doubt, Chileans have every right to be disappointed in their government. In addition to the appointment of Larraín, when it comes to the question of police misconduct and corruption in Chile, the country presents some unfortunate realities about what  many considered to be the only First World nation in Latin America. Although the consensus is that police corruption has its roots in the time of Pinochet’s rule, the last two years have shown that President Piñera’s efforts to solve the problem of police corruption are entirely insufficient. Data collected by researchers at Chile’s Instituto Nacional de Derechos Humanos (or “National Institute of Human Rights”) suggests that police interactions have resulted in “…nearly 226 people injured, of whom 123 are gun injuries; 692 people arrested; and more than 26 legal actions on behalf of 129 victims…” And those numbers were tallied in the wake of  five alleged murders at the hands of the police in October of 2019. Further, some stories of police misconduct are almost too difficult to even think about, with one victim  claiming that Chilean police sexually assaulted him with batons. With experiences like this, it is going to take much more than a measly condemnation by Chile’s president to end widespread corruption in law enforcement.

There is much uncertainty as to what the future holds for Chile. But one thing is for certain—protests have focused disproportionately on ideological differences, neglecting the true source of Chile’s woes: government mismanagement and corruption. Much of this is the result of history, with those on the Right living in fear of another Allende and those on the Left anxious that Pinochet’s spirit lives on in the current administration.

J. Edward Britton is a composer and essayist. He is a graduate of Oberlin College.