Identity Politics and the Death of Moral Imagination 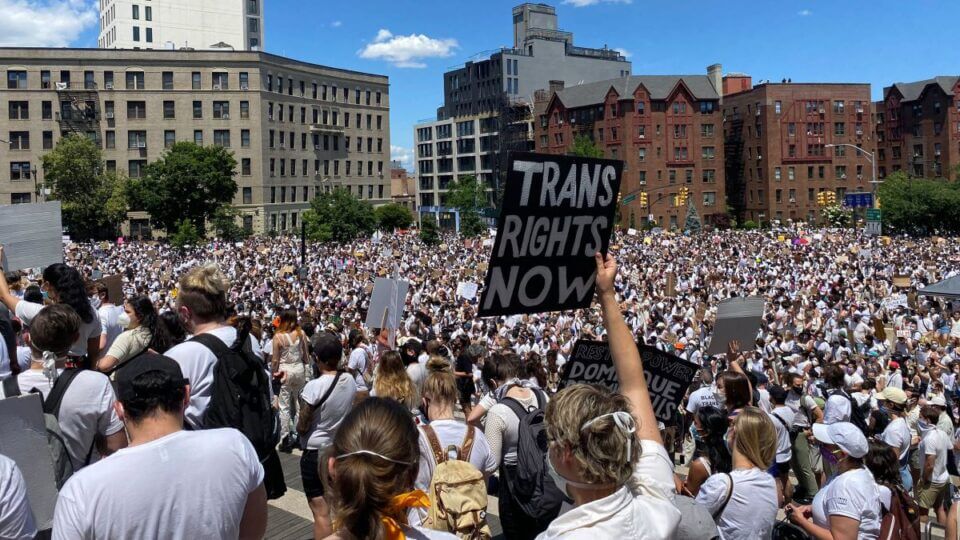 “The problem—as has been said so many times before—is that identity politics takes a kernel of truth about embodied human experience and pushes it to its destructive conclusion.”

Identity politics has gone from a niche intellectual fetish on university campuses to capturing the heights of our culture, directing the course of travel for media sense-making organizations, as well as corporations eager to be seen as adhering to the latest moral dispensation.

The problem—as has been said so many times before—is that identity politics takes a kernel of truth about embodied human experience and pushes it to its destructive conclusion. What used to be called our moral imagination is killed in its sleep. Only a recovery of this will enable us to avert greater degrees of conflict and strife.

The founder of New Humanism, Irving Babbitt (1865-1933) argued that the conflict in our 20th century culture and politics was symbolic of a conflict between worldviews: what he called the “spirit of Edmund Burke” and the “spirit of Jean-Jacques Rousseau.” In other words, this was Rousseau’s reductionist and radical idyllic imagination pitted against Burke’s moral imagination rooted in moral and historical truth.

Moral imagination is the idea that our minds are capable of creating or using ideas, images, and metaphors to recognize moral truths and develop moral responses between people. For thinkers such as Adam Smith and Edmund Burke, ethics are rooted in the particularities of history, narrative, and contingency and are best understood through metaphor and literary frames.

In his 1759 work The Theory of Moral Sentiments, Adam Smith described an imaginative process that enables us to understand those around us, while also developing our own moral judgement. Smith’s key idea was that of the “impartial spectator,” the part of ourselves that enables us, as the historian Richard Aldous writes, to “assess our own thoughts, feelings and actions and to pass judgment on their moral worth.” Smith believed the ability to see ourselves as others see us was invaluable because it allowed a growth of common moral feeling. The growth of sympathetic feelings between bonded souls is the basis of community. As we engage our imaginations, a point of view emerges across society that is held in common and points to what is morally good. The impartial spectator enables us to make and issue moral judgements from a standard, common perspective.

Burke saw moral concepts as manifested particular points in history, tradition, and circumstance. In his Reflections on the Revolution in France published in 1790, Burke suggested that the moral imagination is crucial to forming and remembering the social and moral ideas that are mediated and revealed through particular customs and traditions. For Burke, this enables us to achieve our full, rounded humanity by signifying and directing our affections and guiding our sentiments to understanding. Babbitt, meanwhile, saw the moral imagination as the means of knowing a universal and permanent moral law, beyond the contingent present.

To achieve this, a historical mind was key, Babbitt thought. Echoing Babbitt, Justin Garrison and Ryan Holston write in The Historical Mind that “The more we develop our sense of the past, that is, our historical consciousness, the more we understand a seemingly contradictory truth: the universal manifests itself and is known to human beings in the diverse particulars to which it is inextricably linked.” As such, we must use our imagination to attain the stable and permanent standards that can guide us through the contingencies of our lives. Imagination must be cultivated, and this has been done through mythmaking expressed in art, poetry, and fiction.

As Williams writes, “allyship” is a form of silent repentance for inherently immoral identities like whiteness.

One of the most disturbing aspects of Critical Social Justice (and its manifestation in identity politics) is that this way of reaching one’s higher potential is denied. Instead, there is the belief that each identity has its own way of knowing, which shapes reality. This builds on standpoint epistemology, which holds that the experiences (past and present) of oppressed classes and groups affect the way one thinks and sees the world. Allied to the post-modern thought of Foucault and others, it devolves into different systems of what they called discourse, where language constructs the world, monopolized by the powerful to shape it to their benefit. Discourse shapes reality itself through the different forms and use of language unique to each person.

Identity politics applies this to discrete, oppressed identity groups: race, sex, and sexual orientation, gender identity etc. We now have what writer Thomas Chatterton Williams calls “identity epistemology” or knowing-through-being, allied to “identity ethics” or morality-through-being. This is the origin of language about lived experience so common to Social Justice movements—and the need to be silent when those less privileged and more oppressed than oneself confess their experiences as a form of moral education for those more privileged identities. As Williams writes, “allyship” is a form of silent repentance for inherently immoral identities like whiteness.

As Claes G. Ryn writes concerning postmodernism in his 2003 book A Common Human Ground, the foundations of identity politics deny “enduring standards of goodness, truth, and beauty.” As he further argues, “Since it does not recognize universality” identity politics “must resign itself to the impossibility of any real harmony between human beings.” Those pursuing Social Justice today “conclude that no genuine conversation, no sharing of experience is possible.”

There is simply no way for us to appreciate what it is like to walk in the shoes of those less fortunate than ourselves or to develop the sympathy and compassion needed to recognize injustice and right the wrongs presented. Friendship is precluded, and a harmonious, peaceful, and orderly society is made impossible. Instead, we face the prospect of competing, distrustful groups vying for the power to be found in scratching at the wounds of past victimization and presenting this as a sign of moral rectitude in place of moral character.

The potential for division and incomprehension is, therefore, built into the intellectual foundations of Critical Social Justice and is central to its expression in identity politics. In this, we can see that Rousseau’s radical and idyllic revolutionary imagination is still as strong as ever. The moral imagination of Smith, Burke, Babbitt, and other humanist thinkers is left for dead. Our last avenue to forming bonds of mutual loyalty is thus blocked, and any remaining ties that bind—beyond brute immutable characteristics—are severed forever. We suffer a form of permanent kareth, cut-off from the relationships built on sympathy that make us fully human.

The legislating of Critical Social Justice into corporate and media conduct continues apace and punishes those powerless to do anything about it when they transgress the ever-shifting boundaries. Meanwhile, rioting that destroys poor, minority-majority neighborhoods is excused on the basis of bad-faith, selective quoting from Martin Luther King Jr. Babbitt would not have been surprised: “The multiplication of laws,” Babbitt lamented, “attended by a growing lawlessness—the present situation in this country—is, as every student of history knows, a very sinister symptom. It may mean that our democratic experiment is, like similar experiments in the past, to end in a decadent imperialism.”

To avert the disaster rapidly approaching, we need—as Babbitt and his modern student Ryn argue—to recover the moral imagination of Edmund Burke and those who take inspiration from his moral vision rooted in history and the universal lessons gained from particular, concrete experience. In reaction to the Social Justice obsession with identitarianism, particularity modern conservatives like Ben Shapiro are invested in an abstract universalism, accessible through philosophical reason alone in all times and all contexts, articulated through principles that reveal eternal truths. This denigrates and diminishes the importance of particularity and the reality of concrete experience for how people conduct their lives and develop their moral character.

This is not enough. Affirming the belief in the universal drive across cultures to affirm and achieve our higher potential of character formation does not mean that the particular requires denigration. The self-evident truth of post-modernism, that no two people are alike, is taken to an extreme in identity politics when particularism is elevated above all else.

Neither exclusive particularism nor weightless, blank-slate universalism is sufficient to meet the challenge that identity politics presents. Instead, we need to recover the wisdom of thinkers like Burke and Babbitt; what Ryn calls value-centered historicism “explains the good, the true, and the beautiful as a synthesis of universality and particularity.” Ryn argues that it is through a society’s unique history and traditions that we can gain access to the universal. As he says, “Only experience itself can reveal whether particular principles reflect man’s higher potential.”

An example might help explain this in real-world terms. The conservative philosopher Russell Kirk believed this was key to cultivating one’s imaginative abilities. Art is so important because it has the power to shape the way we see the world. This enables us to perceive the nature and possibilities of human existence. Art—whether literature, poetry, sculpture, great films, or music—speaks directly to the individual. And yet, as Ryn so eloquently writes, “The reader of a superior novel does not feel alone but is, on the contrary, intuitively aware of other possible readers in the very moment of reading…Meaning is intensely personal but it is meaningful precisely because it links unique individuality with universal humanity.”

Their lack of imagination explains the inability of the woke to create art. They only police, censor and destroy, and have been doing so with abandon.

Even though we are alone with the artwork, we are together in the universal meaning it gives, mediated by the concrete particulars of our lives and experiences. The works of the creative imagination that shape our moral imagination are a repository of wisdom and insight, providing consolation in the veil of tears of our existence. They are also the most vulnerable to the imagination-less Social Justice Warriors.

Their lack of imagination explains the inability of the woke to create art. They only police, censor and destroy, and have been doing so with abandon. Confining one to making and appreciating art only according to one’s identity confines the soul. We are unable to reach out beyond the edges of our lives to the hope of meaning found in art, literature, and music as nowhere else. The cruelty of the brutal simplification that Critical Social Justice enforces is revealed here as nowhere else.

To recover and revive the means to live a good life, destroyed by Critical Social Justice and its real-world expression in identity politics, we need to recover and revive the cultivation of our moral imagination, that which binds us together across time and across different identities. As Ryn writes, “in an important sense the truly common human ground is discovered through the differences among individuals and peoples.”

This is the only way we will transcend the chaos that identity politics has brought. Our ability to engage in the meaning that comes from linking the particular with the universal through the pursuit of the good, true, and beautiful must continue. At stake is our ability to live fully human lives.

Henry George is a freelance writer from the U.K., focusing on politics, political philosophy, and culture. He has also written at Quillette, Arc Digital, Reaction, The University Bookman, and Intercollegiate Review.

2 thoughts on “Identity Politics and the Death of Moral Imagination”